The much-awaited annual Christmas celebration celebrated by the Indian Embassy saw a special sparkle this year with a light and decorations emblematic of the divine festival. 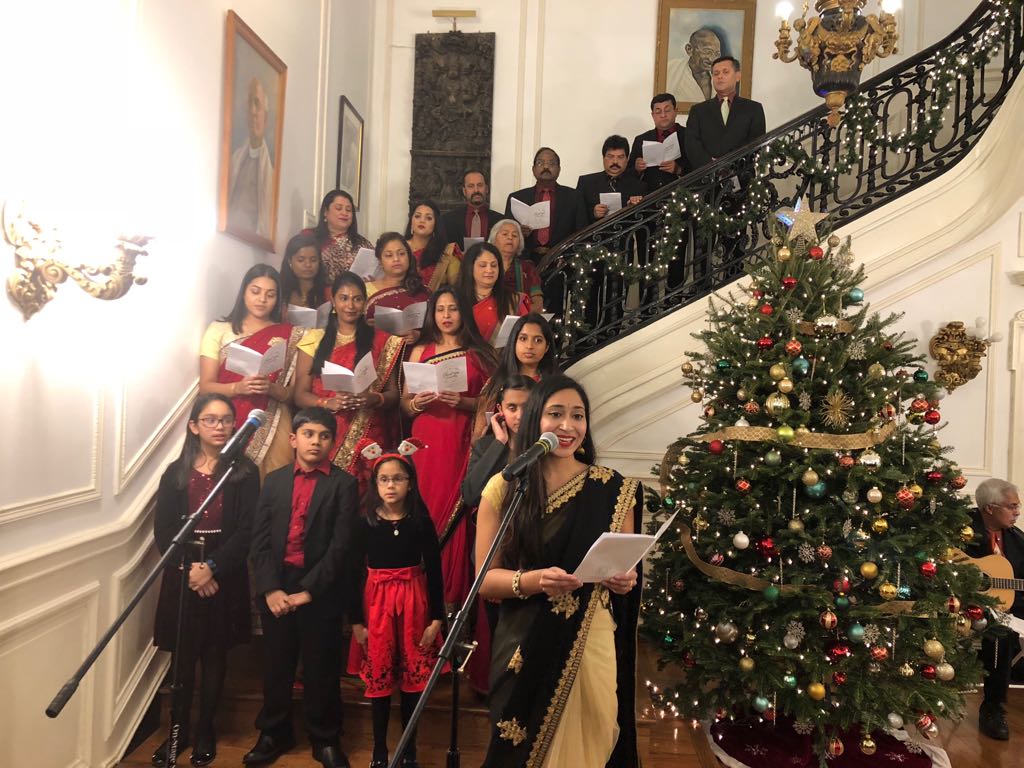 The event, attended largely by the Indian-American Christian community at the Chancery, was welcomed by the Ambassador to the US Navtej Sarna who greeted the gathering and described it as “small but very loving celebration of this very important festival.”

The envoy noted how the festival is celebrated all over the world, including throughout India, in different ways. But, the central message of peace, love, tolerance and brotherhood is the same, he emphasized.

A seasoned diplomat, he recalled attending various Christmas celebrations around the world – in Russia, Poland, and Mass at the Church of the Nativity in Bethlehem. “So, I have witnessed the spectacle of Christmas in different countries, in different societies. But, no matter how different this may be in country-to-country, family-to-family, church-to-church, the fundamental message is the same. It is the message of peace, love, tolerance, brotherhood. This is a message that the world needs today,” he said.

Looking around at the Indian-Christian community who migrated to America, Ambassador Sarna noted, “You are carrying this message of love, peace and brotherhood in your heart and you are bringing it to the United States with a particular Indian ethos behind it.”

“I think this is the message that is imbuing the people-to-people relationship between India and the US,” the envoy said. “Christmas is a festival of light. The coming of a Messiah is always the coming of light, the dispelling of darkness, and of superstition.”

“Even as we celebrate Christmas, we bathe ourselves in this heavenly light, our prayers should be for those who are less fortunate than us, those who do not have the privilege that we enjoy, those who are poor, the homeless, the weak and the oppressed. If we keep them in our thoughts, we enrich ourselves,” Ambassador Sarna said.

Among the special guests at the Christmas celebration was Derek Kan, US Under Secretary of Transportation for Policy, who affirmed, “Love, peace and brotherhood are the hallmarks of India.”  Referring to pictures of Mahatma Gandhi and John F. Kennedy on the walls of the Chancery, he noted, “it is a reflection of the deep partnership” between India and the US.

US Under Secretary of Transportation for Policy, Derek Kan addressing the gathering during Christmas Celebrations @IndianEmbassyUS @IndianDiplomacy @USDOT pic.twitter.com/HHaPeCsH3V

“President Trump has committed to strengthening the US-India relationship,” he said, recalling that when the president met Indian Prime Minister Modi at the White House earlier this year, he “echoed the importance of that strategic partnership.”

Noting that the two leaders met in November at Association of Southeast Asian Nations (ASEAN), Kan mentioned that they “reiterated a shared commitment to creating a free and open Indo-Pacific region” in defence, energy and many other areas.