An Indian-origin researcher in the US has made progress in developing a technology that can repair organs, blood vessels and nerves with a single touch.

The technology, Tissue Nanotransfection (TNT), can generate any cell type of interest for treatment within the patient’s own body, and is seen as a leap forward in regenerative medicine. The new research that was published in the journal Nature Nanotechnology is a step ahead from what people commonly know as gene therapy. 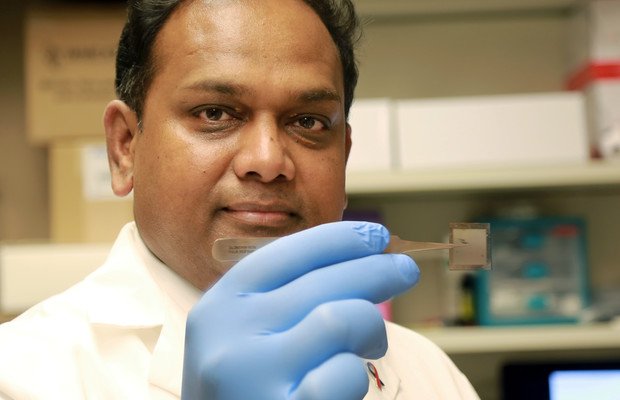 “It takes just a fraction of a second. You simply touch the chip to the wounded area, then remove it,” said Chandan Sen, director, Center for Regenerative Medicine and cell-based therapies at the  Ohio State University Wexner Medical Center.

The chip instantly delivers new DNA or RNA into living skin cells to change their function, with a small electrical charge that’s barely felt by the patient, thus aiding the speedy repair of injured tissue as well as restoring the function of ageing tissue, including organs.

In a series of lab tests, explains Sen on the university website, researchers applied the chip to the injured legs of mice that vascular scans showed had little to no blood flow.

“We reprogrammed their skin cells to become vascular cells,” he said. “Within a week we began noticing the transformation.”

By the second week, active blood vessels had formed, and by the third week, the legs of the mice were saved—with no other form of treatment.

“This process only takes less than a second and is non-invasive, and then you’re off. The chip does not stay with you, and the reprogramming of the cell starts. Our technology keeps the cells in the body under immune surveillance, so immune suppression is not necessary,” says Sen.

Researchers plan to start clinical trials next year to test this technology in humans.