The data currently available does not hold any assurance for the country's economic revival anytime soon, he stated during a media event. 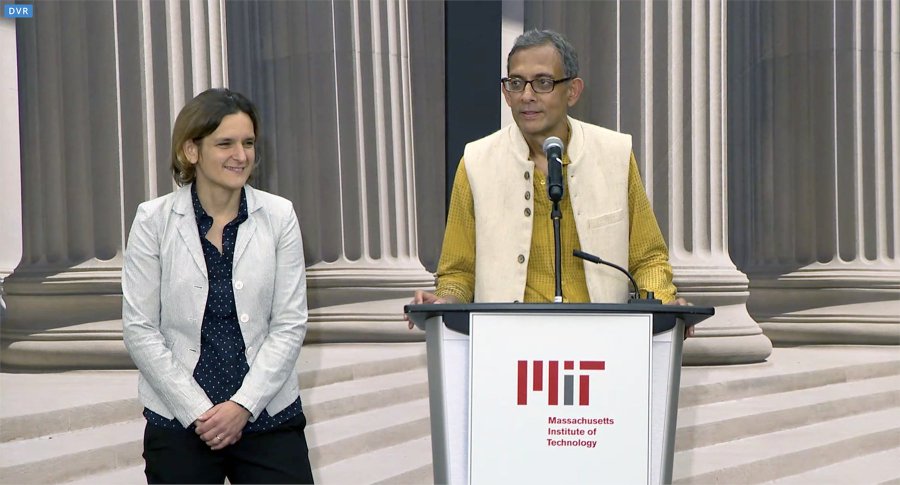 58-year-old economist Abhijit Banerjee, who on Monday won the 2019 Nobel for Economics jointly with his wife Esther Duflo (left) and another economist Michael Kremer for his "experimental approach to alleviating global poverty", said he never thought he would get a Nobel so early in his career. Photo courtesy: Twitter/@MIT

"The condition of Indian economy is on shaky ground. After witnessing the present (growth) data, just can't be sure about it (revival of economy in the near future). In the last five-six years, at least we could witness some growth, but now that assurance is also gone," Banerjee said during a press conference at the Massachusetts Institute of Technology.

Referring to the numbers put out by the National Sample Survey, that come out every 1.5 years and give estimates about the average consumption in urban and rural areas in India, Banerjee said, "The fact that we see that between 2014-15 and 2017-18, that number has slightly gone down. And that's the first time such a thing has happened in many, many, many years, so that's a very glaring warning sign."

"There is enormous fight going on in India about which data is right and the government has a particular view (that) all data that is inconvenient to it is wrong. But nonetheless, this is something even the government is increasingly recognising that there is a problem. So the economy is slowing very, very fast, " he added.

He said that in his view when the economy is going into a "tailspin", is the time when "you don't worry so much about monetary stability and you worry a little bit more about demand. I think demand is a huge problem right now in economy."

The 58-year-old economist, who on Monday won the 2019 Nobel for Economics jointly with his wife Esther Duflo and another economist Michael Kremer for his "experimental approach to alleviating global poverty", said he never thought he would get a Nobel so early in his career.

"I have been doing this research for the last twenty years. We have tried offering solutions towards alleviation of poverty," Banerjee, who is currently the Ford Foundation International Professor of Economics at the Massachusetts Institute of Technology (MIT), said.