Indian diaspora groups organised a series of rallies in support of the controversial Citizenship (Amendment) Act (CAA) across the United States over the past weekend. 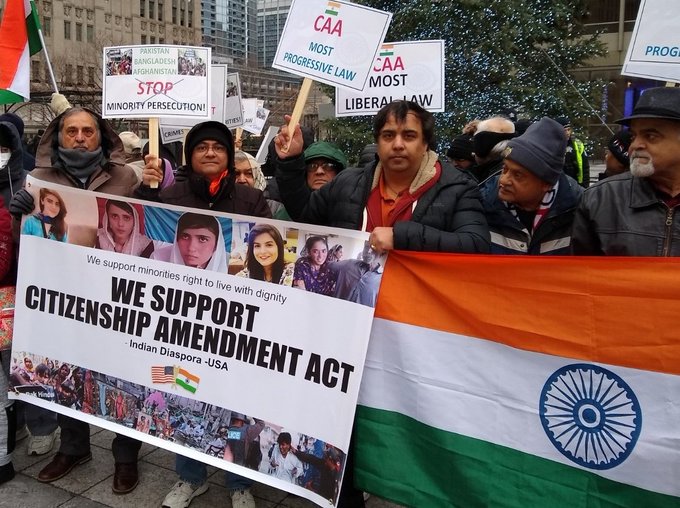 More than 300 Indian-Americans were present at a rally in downtown Chicago on Saturday. Photo courtesy: Twitter/@RAJARJPS

Braving sub-zero winter temperatures in major cities like Boston, Chicago, Seattle, and Atlanta among others, members of the Indian-American community organised events to “create awareness against the misinformation being spread in the US about the purpose of the CAA”.

In the Boston area, members of the diaspora gathered at the historic Harvard Square on Sunday to participate in the rally, a press release issued by the organisers stated.

More than 300 Indian-Americans were present at a rally in downtown Chicago on Saturday.

The participants signed a memorandum supporting the CAA which was forwarded to the Government of India through the Consul General of India in Chicago.

Archana Sunil, a health and medicare insurance advisor who organised the Seattle pro-CAA rally explained that the CAA had a limited scope meant to simply rehabilitate those persecuted minorities already in India, but who were left behind on the other side during the 1947 Partition.

In Atlanta, a group of 100 people gathered outside the CNN headquarters to show their support for the legislation.

According to the CAA, members of Hindu, Sikh, Buddhist, Jain, Parsi and Christian communities who have come from Pakistan, Bangladesh and Afghanistan till December 31, 2014 following religious persecution there will get Indian citizenship.