In the midst of misery caused by Hurricane Harvey, a massive number of Indian-Americans have been affected by the flooding as the storm continues on its path of destruction. To help each other, people of all communities have come forward. Hindus have opened their temples, Sikhs their gurdwaras, and Muslims their mosques, in a massive people-to-people effort. 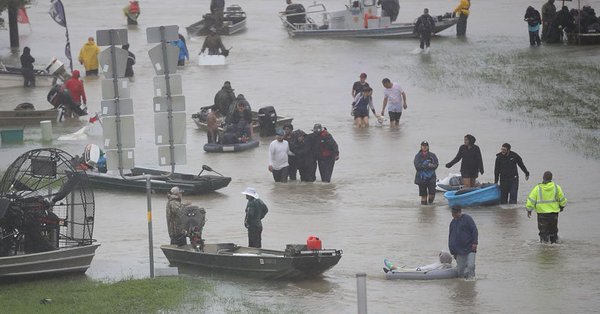 The fourth largest city in the US, Houston has been deluged, with a lot more rain set to come pouring down from the skies in the days ahead, and there is no respite for those who thought the worst was over.

Temples like Shady Side and Astalakshmi in the Eldridge area, which is west of Route 99, are already housing close to 500 families, mostly Indian-Americans.

#HurricaneHarvey damage estimated at $42 billion, among most costly US storms https://t.co/uVnu7xFD5y pic.twitter.com/lOa5MibAZV

Multiple shelters at Cinco Ranch High School and Morton Ranch High School as well as most recently, Cinco Junior High, have been opened in Pineville, to house displaced families. Indian-American restaurants as well as people with different skills, doctors, nurses, have used social media to reach out a helping hand, including someone who said he would help with any electrical problems.

Federal and local agencies in Texas said more than 13,000 people have been rescued from flood waters and other devastation caused by Tropical Storm Harvey in Houston and surrounding areas. But amid the rescues, the death toll continued to rise, hitting 18 by last night (Tuesday). Growing numbers of people have also been left homeless by the catastrophic storm.

SEWA International Houston Chapter’s President Gitesh Desai has been directing the relief efforts despite the fact that his own house has been flooded and he had to wade through five feet of water to move into a hotel.

There have been reports of two Indian students at Texas A&M University in critical condition at a local hospital after they were rescued from swirling waters. One of them has died and other is still in ICU.