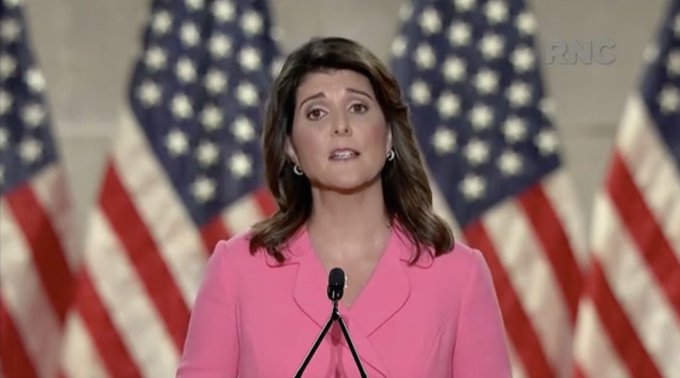 Haley said the American people know they can do better and reflected on how her rise in politics shows that opportunity — and not racism — defines America. Photo courtesy: RNC

The 48-year-old former US Ambassador to the United Nations and two-time Governor of South Carolina is the only Indian-American listed so far to be speaking at the Republican National Convention.

On Thursday, the Republicans will formally re-nominate President Donald Trump as their candidate for the November 3 presidential election.

"In much of the Democratic Party, it's now fashionable to say that America is racist. That is a lie. America is not a racist country," Haley said. "This is personal for me. I am the proud daughter of Indian immigrants. They came to America and settled in a small southern town. My father wore a turban. My mother wore a sari. I was a brown girl in a black and white world," she said during the virtual four-day convention.

She said the American people know they can do better and reflected on how her rise in politics shows that opportunity — and not racism — defines America.

The little girl on the left was born in Bamberg, South Carolina to immigrant parents. They named her “Nikki” which means “little one” in Punjabi. Running as a Republican, @NikkiHaley became the first woman to serve as Governor of South Carolina. pic.twitter.com/Km9FJL4XJA

"My mom built a successful business. My dad taught 30 years at a historically Black college. And the people of South Carolina chose me as their first minority and first female governor," Haley said.

Her speech showcased her status in the party, and set the stage for her to seek higher platforms in the future.

"America isn't perfect. But the principles we hold dear are perfect. If there's one thing I've learned, it's that even on our worst day, we are blessed to live in America," she added.