IMPACT, an Indian-American political organisation, disclosed that it would utilise USD 10 million to support the community members prepare and run for elected offices across the country. 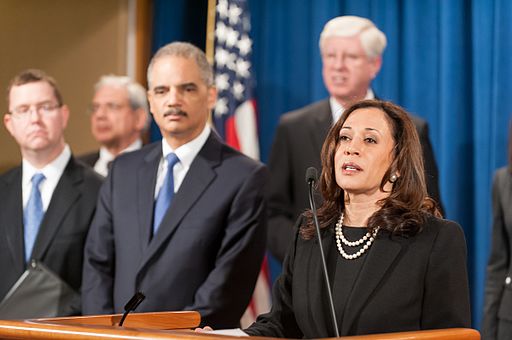 Kamala Harris (right), an Indian-American woman is a top contender to be the Democratic nominee for Vice President. Photo courtesy: Wikimedia

IMPACT plans to create a new programme to identify, elevate, and support Indian-American elected officials running for higher office, according to a media release.

The announcement was welcomed by Indian-origin Senator Kamala Harris.

"I'm excited about the Indian-American community's growing engagement in the political process — not just as an Indian American, but as someone who believes the more Americans of all ethnicities and backgrounds feel ownership in our democracy, the stronger our democracy will be," the California Senator said.

IMPACT said the groundbreaking investment and prominent hire signals a new phase in the organisation's development at a time when Indian-Americans - the second-largest immigrant group in the US - are beginning to flex their political muscle on the national stage.

An Indian-American woman is a top contender to be the Democratic nominee for Vice President and the number of Indian Americans in Congress has grown five-fold in just the past eight years.

"After significant gains in previous election cycles, Indian-Americans are poised to assert our emerging power by electing more Indian American candidates at every level of government, and by supporting excellent candidates of all backgrounds who share our ideals of inclusivity, equity, and civil rights," Makhija said.

Indian-Americans are one of the fastest-growing segments of the US population — doubling in size over the last two decades — ensuring their footprint on the political landscape will only grow in the coming decades.

Son of Indian immigrants who made Pennsylvania's coal country home, Makhija teaches election law at the University of Pennsylvania Law School, has advised candidates and philanthropies in Pennsylvania and nationally, and was a Democratic candidate for the Pennsylvania legislature in 2016.