Indian celebrities are often seen granted the UAE golden visa so that they work, live and holiday in the Gulf country and now the latest actor to join the feat is Mouni Roy. 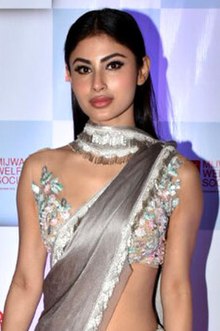 Roy has been a frequent visitor to Dubai. Photo courtesy: Wikimedia

Roy, known for starring in movies such as ‘Gold’ and ‘London Confidential’, received the visa in the presence of Anil Dhanak, Managing Director of Kanz Jewels, Gulf news reported.

“Calling Dubai my second home will be an under statement since I spent more time in here,” the actress said in a statement. “I am deeply honoured to receive the golden visa and I thank the authorities for considering me worthy to receive this privilege. For me Dubai is an ideal place for creative talents to pursue their dreams and I am sure some of my forthcoming movies will be shot in the UAE.”

Roy has been a frequent visitor to Dubai, and in the past has been spotted at popular locations such as Burj Al Arab, Love Lake and Dubai Safari Park.