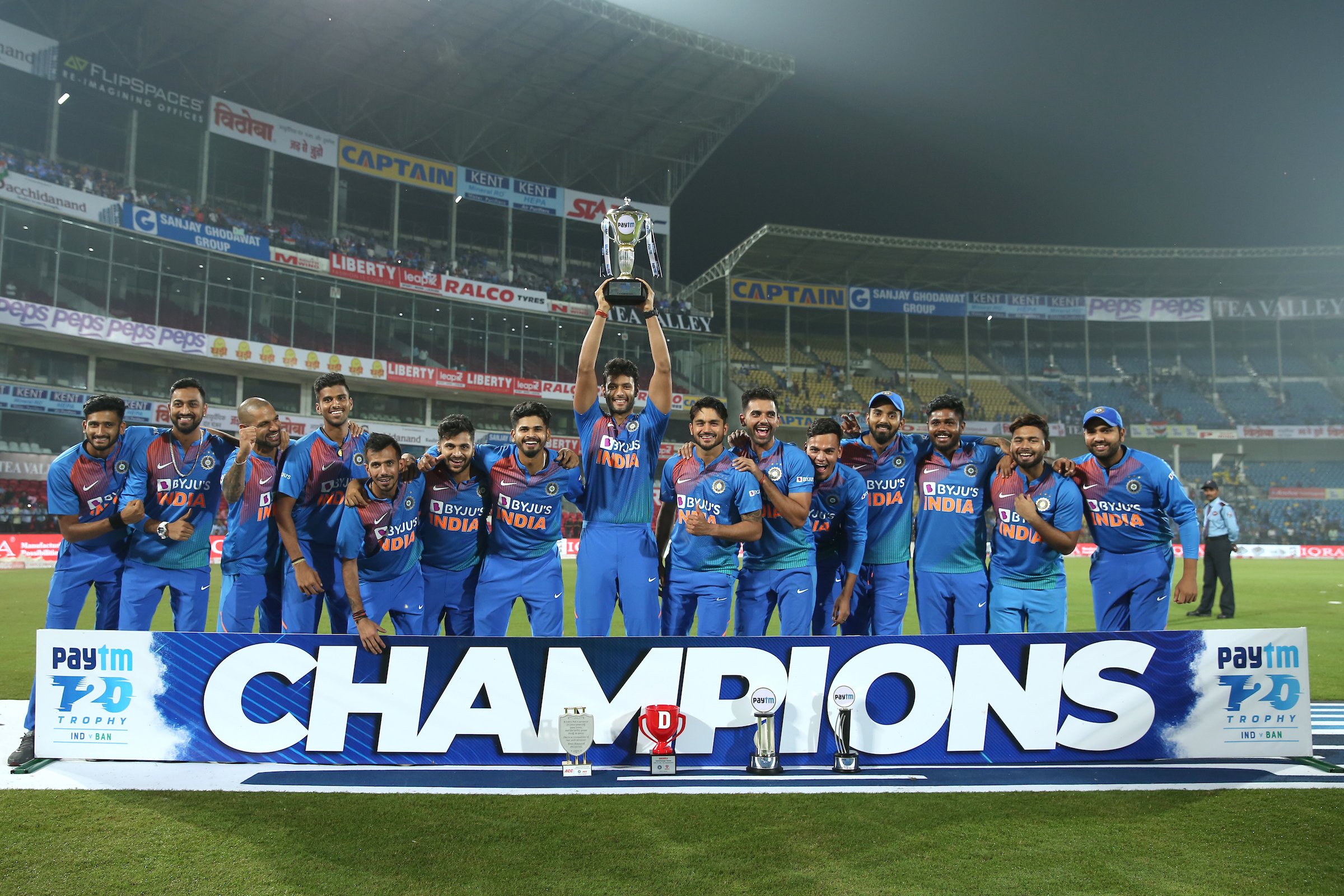 India beat Bangladesh by 30 runs in the 3rd T20I at Nagpur to wrap up the 3-match series 2-1. The night was a memorable one for youngster Deepak Chahar who took a world record six-wicket haul which included a hat-trick.

Winning the toss, Bangladesh put India in to bat first - a decision that seemed the correct one when stand-in skipper Rohit Sharma fell in the second over, leaving India at 3/1.

Shikhar Dhawan played a quick knock of 19 off 16 balls before he was sent back by Shafiul Islam - India at 35/2 in the sixth over.

With the two star batsmen gone, KL Rahul and Shreyas Iyer took charge of the Indian innings. A quick 59-run stand meant that India were in control and made sure that the run rate stayed healthy.

KL Rahul fell for a well-made 52 off 35 balls, while Iyer, who was dropped first ball, eventually went for 62 off 33 balls.

Bangladesh lost opener Liton Das early - out for 9 of 8 balls and Deepak Chahar’s first victim of the evening.

Chahar got Soumya Sarkar off the very next ball, leaving the visitors reeling at 12/2.

Two in two for Deepak Chahar.

Mohammad Naim was the star for Bangladesh on the night - he smashed Yuzvendra Chahal for three fours in a row, got two fours off Shivam Dube the following over and then went after the bowling of Washington Sundar. He raced away to 81 off 48 balls before Dube brought an end to the carnage.

Game on in Nagpur!

However, while Naim was single handedly taking apart the Indian bowling, he received no support from the other end. And with the host bowlers chipping away at the rest of the batting line-up, things began to collapse for Bangladesh.

Chahar was back in action to claim his third wicket of the night when he dismissed Mohammad Mithun. Mushfiqur Rahim was gone the next over - dismissed for a duck by Dube, who then also got Naim and Afif Hossain.

Chahar gets the much needed breakthrough. Picks up his third wicket of the innings.

Chahar then came back to complete the formalities, which he wrapped up in style with a hat-trick dismissing Shafiul Islam, Mustafizur Rahman and Aminul Islam across his last two overs. From 106/2, Bangladesh had collapsed to 144 all out.

What an outing this has been for Deepak Chahar. Picks up 6 wickets against Bangladesh in the series decider 👏👏 pic.twitter.com/YUVLC8bq6K

India wrapped up a 30-run win and a 2-1 series win with Chahar named Man of the Match.

.@deepak_chahar9 today became the first Indian to pick up a hat-trick in T20Is 🙌👏 pic.twitter.com/qNctKUVgmF

Congratulations @deepak_chahar9 @ImRo45 @bcci for the win .. never easy with so much dew ..

Very impressed with the way @deepak_chahar9 has evolved as a T20I bowler. Always had the ability to pick up wickets with the new ball but has worked hard to bowl in the middle and end overs. Got a lot of variations up his sleeves & knows when to use them. #INDvsBAN

Exceptional bowling by @deepak_chahar9!
He bowled very smartly and used his variations well to pick up crucial wickets at crucial stages.
Special mention to @IamShivamDube, @ShreyasIyer15 & @klrahul11 to give #TeamIndia the series victory in the decider. #INDvsBAN pic.twitter.com/JTLgrC1dUz