India, US to exchange Country by Country reports of multinationals, rejig tax compliance

In a boost to ease of doing business and some relief in tax compliance burden of Multi-National Enterprises, India and the US have signed an intergovernmental agreement for the exchange of Country by Country (CbC) reports. 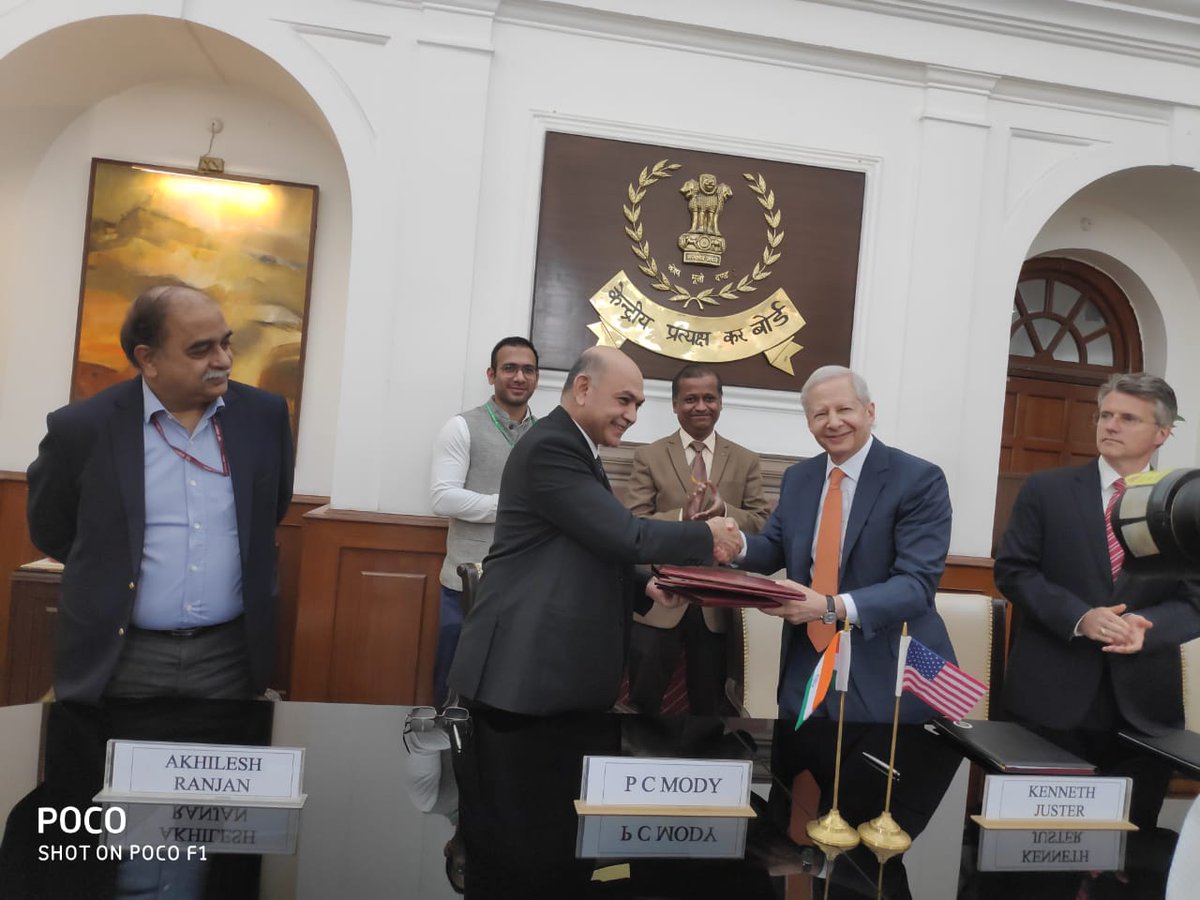 P C Mody, Chairman, Central Board of Direct Taxes (CBDT) and Kenneth Juster, Ambassador of USA to India after signing the Inter-Governmental Agreement for the exchange of Country by Country (CbC) Reports on automatic basis. in New Delhi. Photo courtesy: Ministry of Finance

The agreement applies to MNEs worth 750 million Euros or INR 5.5 billion and above and is effective January 1, 2016.

The agreement was signed yesterday by P C Mody, Chairman, Central Board of Direct Taxes and Kenneth Juster, Ambassador of the United States of America to India, on behalf of the two countries.

This Agreement for Exchange of CbC Reports, along with the Bilateral Competent Authority Arrangement between the two competent authorities, will enable both the countries to automatically exchange CbC Reports filed by the ultimate parent entities of Multinational Enterprises (MNEs) in their respective jurisdictions, pertaining to the years commencing on or after 1 January 2016.

It would also obviate the need for Indian subsidiary companies of US MNEs to do local filing of the CbC Reports, thereby reducing the compliance burden.

"This Agreement strengthens the economic partnership between the US and India, providing greater ease of doing business for investors," Juster said.

Filing of CbC reports by the ultimate parent entity of an MNE group to the prescribed authority in the jurisdiction in which it is a resident, and exchange of such CbC Reports by the Competent Authority of the said jurisdiction with the Competent Authorities of other jurisdictions in which the group has one or more of its constituent entities, are the minimum standards required under the Action 13 Report of Organisation for Economic Co-operation and Development (OECD) and G20 Erosion and Profit Shifting (BEPS) Project in which India is an active participant.

A CbC Report has aggregated country-by-country information relating to the global allocation of income, the taxes paid, and certain other indicators of an MNE group. 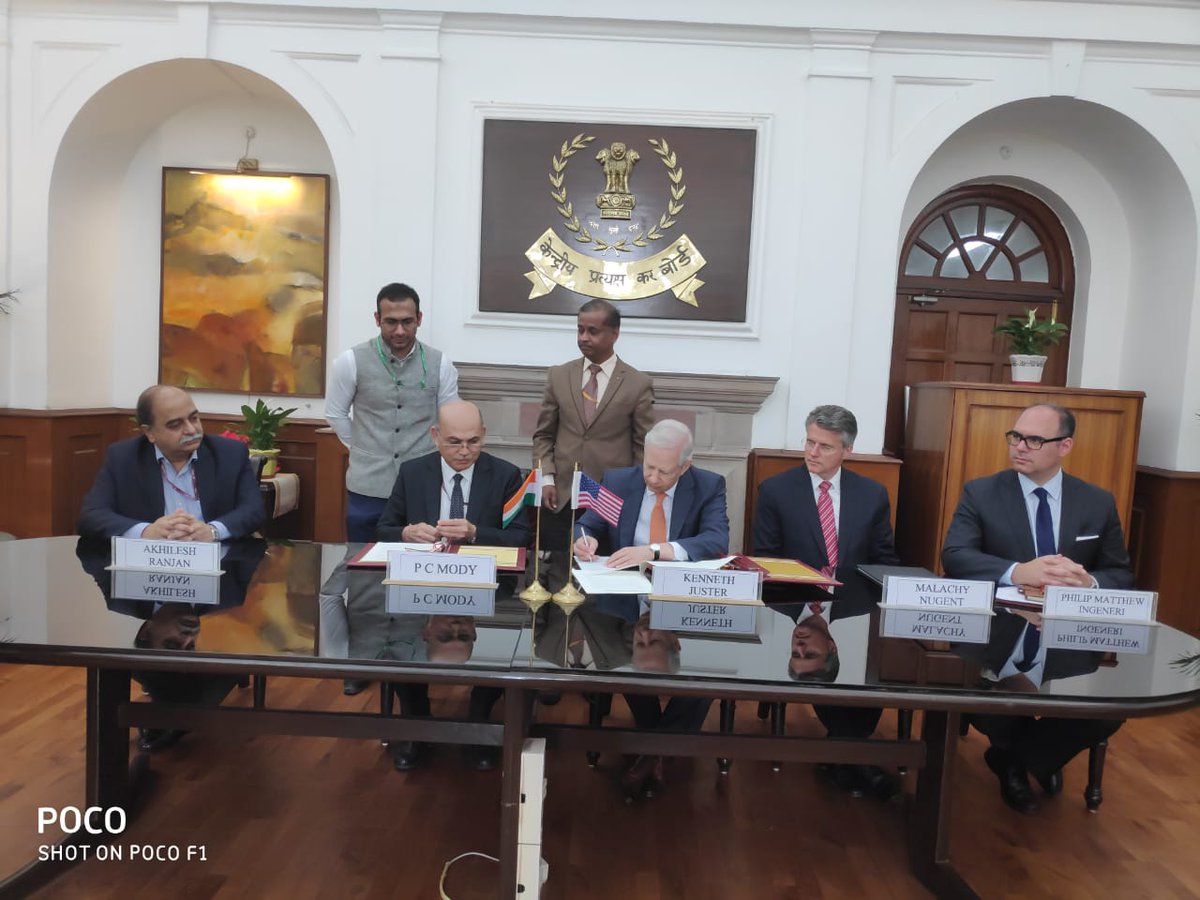 India and US signed Inter-Governmental Agreement for the exchange of Country by Country (CbC) Reports on automatic basis. Photo courtesy: Ministry of Finance

MNE groups having global consolidated revenue of 750 million Euros or more (or a local currency equivalent) in a year are required to file CbC Reports in their parent entity’s jurisdiction. The INR equivalent of 750 Million Euros has been prescribed as INR 5.5 billion in Indian rules. This information will enable an enhanced level of assessment of tax risk by both tax administrations.

The Base Erosion and Profit Shifting (BEPS) Action Plan adopted by the OECD and G20 countries in 2013 recognised that enhancing transparency for tax administrations by providing them with adequate information to assess high-level transfer pricing and other BEPS-related risks is a crucial aspect for tackling the BEPS problem.

The BEPS Action 13 report 'Transfer Pricing Documentation and Country-by-Country Reporting' provides a template for MNEs to report annually and for each tax jurisdiction in which they do business the information set out therein.

Since the Action 13 Report was released, jurisdictions have made great efforts to establish the necessary domestic and international legal and administrative frameworks for the filing and exchange of CbC Reports in accordance with the Action 13 minimum standard and the global landscape for CbC.

"Reporting by MNE groups is still evolving. This initial period may be challenging for both tax administrations and MNE groups seeking to be compliant with CbC Reporting, which may call for a pragmatic approach that takes into account best efforts made to comply with CbC related obligations. These challenges should diminish over time, as the global landscape for CbC Reporting becomes more settled and both tax administrations and MNE groups gain in experience," says the OECD.