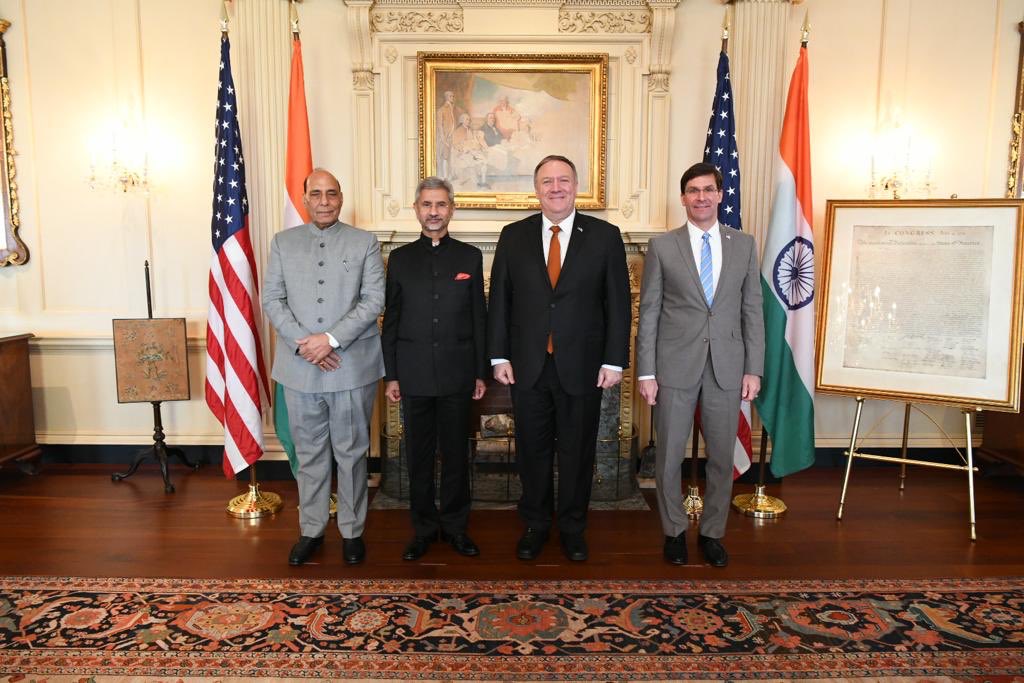 Participated in the 2 Plus 2 Dialogue between India and the United States in Washington.

India and the US have a worldwide strategic partnership and we are working collectively to deepen this partnership. The 2+2 mechanism has brought about greater synergy in our policies. pic.twitter.com/8JqamHLIAP

Singh is on his maiden visit to the US as Defence Minister and was given a 21 gun salute at the River Side entrance of the Pentagon,  followed by a one-on-one meeting with Esper.

Visited the @ArlingtonNatl and offered tributes to the fallen soldiers. I salute their exemplary courage. pic.twitter.com/3K2kHh81r5

The leaders discussed issues related to strengthening defence ties and issues of mutual interest and concerns, including the neighbourhood and the Indo-Pacific region.

An honor to host Indian Minister of Defense @rajnathsingh today. We discussed our deepening strategic partnership that is built on a shared commitment to democratic values, ensuring the rule of law, and advancing a free and open #IndoPacific region. pic.twitter.com/0VRD1j7rpe

India and the US also signed a defence agreement called the Industrial Security Annex or ISA, which allows the US to share sensitive information with private Indian entities on military hardware. The ISA will pave the way for joint production of military equipment.

“We have agreed to move forward in our engagement in the area of defense innovation. The 2+2 meeting today is a cornerstone in strengthening the strategic defense engagement between India and U.S. and will enable us to work alongside in a number of areas of mutual interest,” said Singh.

Meanwhile, at the Foggy Bottom headquarters of the State Department, Jaishankar and Pompeo also held a one-on-one meeting discussing bilateral and regional issues.

Concluded the #IndiaUS 2+2 meeting in Washington DC. Our conversations reflected the broad agenda of our strategic partnership. Confident that the meeting today would set direction for further cooperation. pic.twitter.com/bnW5ylPLxe

The US Secretary of State was also asked about the Citizenship (Amendment) Act, over which the US has raised concerns, to which he replied, "We care deeply and always will about protecting minorities and religious rights everywhere. We honour Indian democracy as they have a robust debate on the issue that you raised."

At the #USIndia 2+2 Ministerial we explored ways to deepen our shared security, advance a free and open #IndoPacific region, and expand economic prosperity. These efforts, all built on the foundation of a strong strategic partnership, will benefit the people of both our nations. pic.twitter.com/r2tK2iZZKb

This was the second 2+2 meeting between Indian and US officials. The first such dialogue was held in Delhi in September last year.