India source of most online labour in the world, claims iLabour study at Oxford

According to a recent study, India is the largest supplier of online labour in the world. The iLabour report analysed data across multiple e-platforms connecting freelancers with employers. 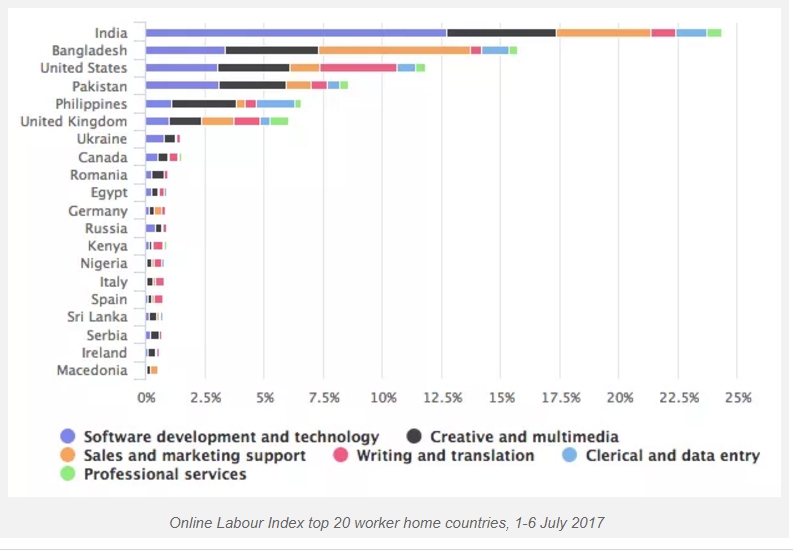 The results of the study. Photo Courtesy: iLabour

India is followed by Bangladesh, US, Pakistan, Philippines and the UK in what is being termed "digital gig work" or freelance work offered online. Over half of the online work supplied out of India is dominated by software development and the technology sector, coming it at 55 per cent of the market share.

The study, titled ‘Online Labour Index: Measuring the Online Gig Economy for Policy and Research’, was conducted by the iLabour project team at the Oxford Internet Institute (OII) of the University of Oxford, who published it last week. This report analysed data for the first week of July. The project is funded by the European Research Council and led by Professor Vili Lehdonvirta,  Associate Professor and Senior Research Fellow at the Oxford Internet Institute.

How are some of the world's largest enterprises using online freelancing platforms? @GF_Corporaal reports findings https://t.co/SBNwlsAzGX

“The largest overall supplier of online labour according to the data is the traditional outsourcing destination India, which is home to 24 per cent of the workers observed. India is followed by Bangladesh (16 %) and United States (12 %),” claimed the report.

The report analysed data from four online platforms - Fiverr, Freelancer, Guru, and PeoplePerHour. "Based on traffic statistics, we can estimate that these four sites represent at least 40% of the global market for platform-based online work," said Lehdonvirta.