India and Saudi Arabia kicked off the first naval exercise, Al-Mohed Al-Hindi 2021, reflecting the fostering defence relationship between both sides. 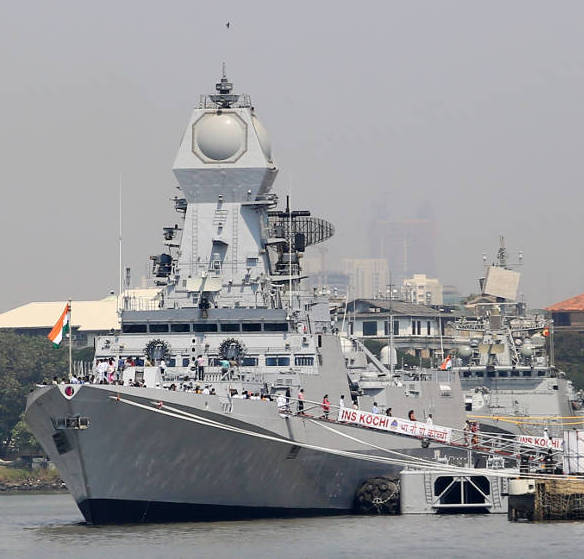 INS Kochi is equipped with sophisticated digital networks, and a unique feature of the warship is the high level of indigenisation, with most systems sourced from within India. Photo courtesy: Wikimedia

The exercise is taking place in the backdrop of Indian Army chief MM Naravane’s first visit to the West Asian country in December 2020.

Indian Western Naval Fleet's INS Kochi, which had conducted the Zayed Talwar exercise with the UAE off the Abu Dhabi coast, arrived on Monday at Port Al-Jubail for the drill.

The Al-Mohed Al-Hindi exercise began with the harbour phase on Monday, and the Indian embassy said the drill “heralds a new chapter in the bilateral defence ties”.

INS Kochi was welcomed at the port by officials of the Royal Saudi Naval Forces, Border Guards and the Indian embassy.

India and Saudi Arabia were scheduled to conduct their first naval exercise in 2019 but was rescheduled because of the COVID-19 pandemic.

The Indian Navy held a few minor exercises amid the pandemic but plans for larger drills were recently revived. Warships from India, Australia, Japan and the US – the four members of the Quadrilateral Security Dialogue or Quad – will participate in the Malabar exercise in the Western Pacific later this month.

INS Kochi is equipped with sophisticated digital networks, and a unique feature of the warship is the high level of indigenisation, with most systems sourced from within India.