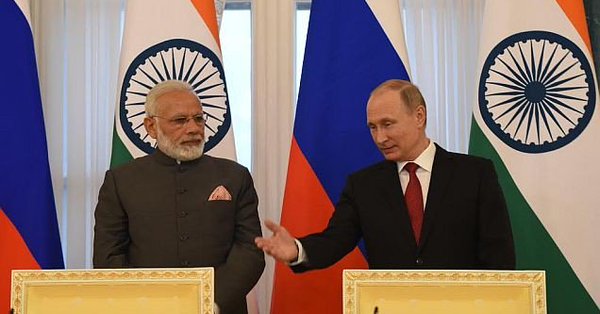 India and Russia signed an agreement on setting up of two more units of the Kudankulam nuclear power plant in Tamil Nadu and decided to give a “new direction” to the defence cooperation between the two “great powers”.

The two countries also decided to hold the first tri-Services exercises, named ‘Indra-2017’, this year and start the joint manufacturing of frigates, adding on to the co-production of Kamov-226 military helicopters.

Yet another wonderful interaction with President Putin at St. Petersburg. pic.twitter.com/MWJUBOzhz0

The decision to ramp up defence cooperation was taken during the annual summit talks between the Indian Prime Minister Narendra Modi and Russian President Vladimir Putin St Petersburg. A vision document, issued after the talks, said both the countries also decided to work towards a “qualitatively higher level of military-to-military cooperation.

“We will upgrade and intensify this (military) cooperation, through joint manufacture, co-production and co-development of military hardware and military spares, with increasing reliance on the adoption and sharing of future technologies, in compliance with the obligations of the sides under the existing agreements on military-technical cooperation,” it said.

Russia also reaffirmed its “strong support” to India’s candidature for a permanent seat in the reformed UN Security Council and a membership in the Nuclear Supplier Group (NSG) and other non-proliferation regimes. The two sides also resolved to enhance their cooperation at multilateral fora like the BRICS, WTO, G20 and Shanghai Cooperation Organisation as well as Russia-India-China cooperation.

“In this context, Russia welcomes India’s application for the membership in Nuclear Suppliers Group and the Wassenaar Arrangement and reiterates its strong support for India’s earliest admission to these control regimes,” the declaration said.

In the summit, the two sides, in an obvious reference to China’s One Belt One Road (OBOR) project, said they oppose any recourse to “unilateralism or lack of respect to sovereignty” and ignoring the core concerns and legitimate interests of the countries. India’a main objection to the project comes from its concerns over the China-Pakistan Economic Corridor (CPEC), which is a part of the OBOR. CPEC’s route cuts through Pakistan-occupied Kashmir (PoK).

Modi’s agenda on the visit was to reaffirm ties with Russia, a traditional ally, which had been drifting towards China and Pakistan of late.