Despite sanctions imposed on Russia by the US and other Western countries on account of its war in Ukraine, India is likely to double its trade with the country, a report said. 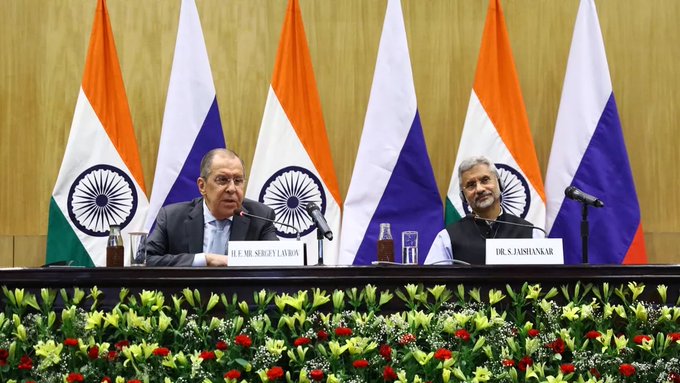 During a bilateral meeting with Russian foreign minister Sergei Lavrov, EAM S Jaishankar said it is India's fundamental obligation to ensure that Indian consumers have the best possible access on the most advantageous terms to international markets. Photo courtesy; Twitter/@srdmk01

The increase in trade volume is coming mainly on India's increased import of Russian oil, a fact that has attracted much criticism from the West. India, which originally imported just 1 per cent of its oil from Russia, is now importing as much as 20 per cent.

“The department of commerce mentioned that it was ready to support the initiative, and on the basis of feedback from various exporters and business entities, DoC was confident of doubling India-Russia trade within the near foreseeable future, and this would be further spurred by the use of INR for trade settlement,” The Indian Express reported, citing minutes of a high-level meeting in September on the issue of trading in Indian Rupee, acquired under the Right to Information Act.

The meeting by the Department of Financial Services was called to discuss the issue of overseas trading in Indian Rupee announced by the RBI in July, the report said, adding that it was attended by representatives from the RBI, multiple governmental ministries, the Indian Banks Association, and PSBs and private banks.

During a bilateral meeting with Russian foreign minister Sergei Lavrov, EAM S Jaishankar said it is India's fundamental obligation to ensure that Indian consumers have the best possible access on the most advantageous terms to international markets.

"For us, Russia has been a steady and time-tested partner, and as I said, any objective evaluation of our relationship over many decades would confirm that it has actually served both our countries very, very well," he said.

"So if it has served my country very, very well for many decades, I think you can see the obvious interest and commitment I would have in keeping that relationship strong and steady," the minister noted.

On the oil supply issue, Jaishankar said there is stress on the energy markets which has been created by a combination of factors.

"But as today the world's third-largest consumer of oil and gas, a consumer where the levels of income are not very high, it is our fundamental obligation to ensure that the Indian consumer has the best possible access on the most advantageous terms to international markets," he said.

Russia has been a target of wide-ranging Western sanctions since the beginning of the Ukraine war in February, including being removed from the SWIFT network used by banks in cross-country transactions, to a cap on Russian oil prices in recent days.