The Ajinkya Rahane-led Indian cricket team beat Australia by 8 wickets in the 2nd Test at Melbourne to level the 4-Test series 1-1.

Bumrah strikes with the new ball!

A breakthrough for #TeamIndia as @Jaspritbumrah93 ends the partnership with a sharp bouncer and Cummins is OUT for 22.

Day 4 of the test began with Australia at 133/6, having taken a narrow lead over India. The morning session saw some gritty batting by the Aussie lower order as the Indian bowlers kept up a relentless attack.

Mohammed Siraj gets into the act now as he has Green caught beautifully at mid wicket by Jadeja. Australia 180-8 now and lead by 49 runs. #TeamIndia #AUSvIND

Eventually, they were only able to add another 67 runs to their overnight score, getting bowled out for 200, setting India a meagre target of 70 for the win.

Australia all out for 2⃣0⃣0⃣.

However, an attractive 35* by Shubman Gill and an able 27* by first innings centurion Rahane meant India suffered no further setbacks and cruised to a series-levelling win. 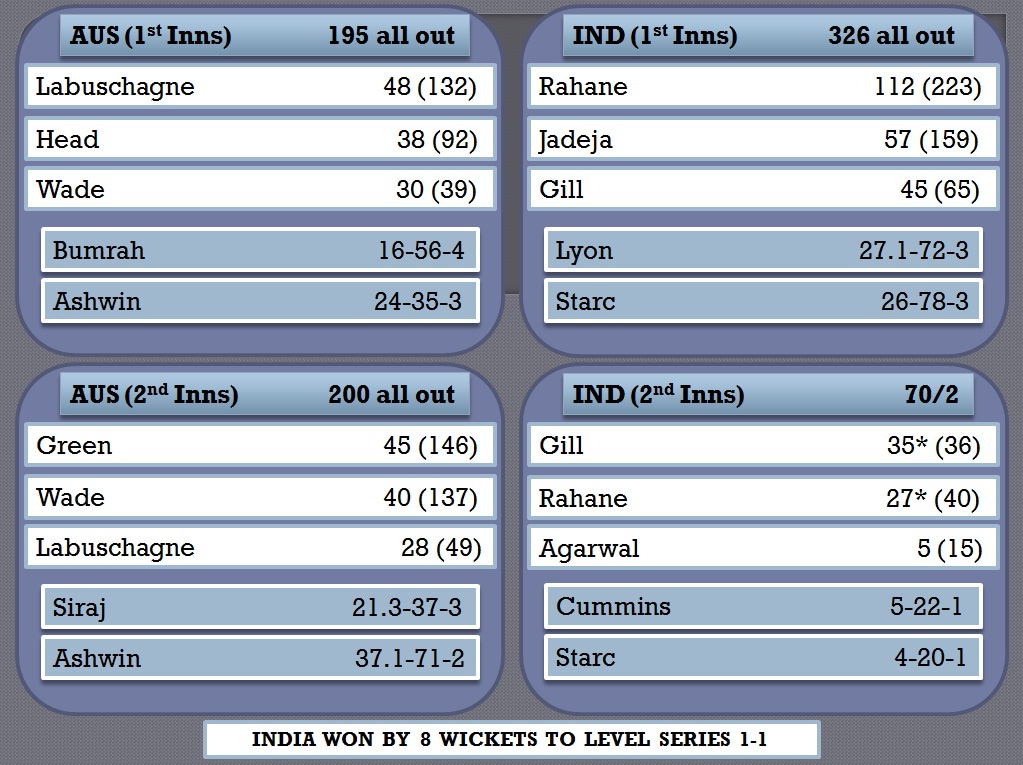 This makes it three wins in three Tests as captain for Rahane and the victory was especially sweet for a team that suffered the ignominy of having been bowled out for a paltry 36 in the second innings of the first Test just over a week ago.

Together we stronger 🇮🇳
Soaring On 🙌💪

To win a Test match without Virat, Rohit, Ishant & Shami is a terrific achievement.

Loved the resilience and character shown by the team to put behind the loss in the 1st Test and level the series.

Lot of positives from this win. Rahane led the side brilliantly, bowlers were relentless but the biggest positive is the performance of two debutants. Both of them were confident and not overawed by the big occasion. Strength of Indian cricket is their strong bench strength.

Fantastic win for the Team India at the MCG. Character and composure shown throughout the game was excellent to watch @bcci

What a win this is, absolutely amazing effort by the whole team. Couldn't be happier for the boys and specially Jinks who led the team to victory amazingly. Onwards and upwards from here 💪🇮🇳