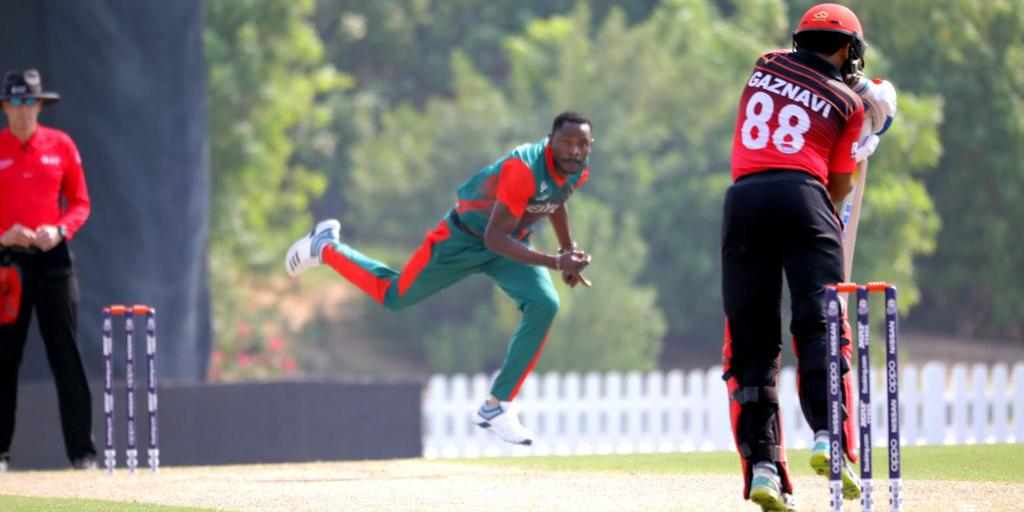 After two wins on the trot, Singapore suffered their second consecutive defeat in the ICC T20 World Cup Qualifier with a 7-wicket loss to Kenya, leaving Group A wide open.

Electing to bat first, Singapore started with yet another change in the opening pair with Rezza Gaznavi partnering Surendran Chandramohan. Gaznavi began with a boundary but was dismissed two balls later.

Chandramohan and Tim David picked up the pace with David scoring a brisk 29 off 19 balls before being dismissed by Shem Ngoche, making it 36/2.

Chandramohan, who has been in decent form this tournament, continued the momentum, reaching 40 off 30 balls before being sent back by Ngoche. Singapore now at 92/3.

A run-a-ball 33 by Aritra Dutta and quickfire twenties by Manpreet Singh (24 off 18 balls) and Navin Param (21 off 10 balls) meant that Singapore looked like they were cruising to a very defendable total.

However, things fell apart for the men in red at the death. Lucas Oluoch’s triple wicket maiden final over, in which he dismissed Sidhant Singh, Manpreet and Amjad Mahboob, meant that Singapore finished at 157/9 in 20 overs.

Kenya made a dream start to their chase with Irfan Karim and 19-year-old Aman Gandhi putting up a 110-run opening stand. Kenya in fact ended the powerplay at 50 for no loss.

Karim soon brought up his half century off just 32 balls. Gandhi too hit a 50 off 46 balls but was dismissed by skipper Mahboob right after.

Dhiren Gondaria joined Karim out in the middle and showed his intentions right away with a lusty six before being run out by Gaznavi for 12.

Kenya needed just 27 runs in 21 balls with eight wickets still in hand and things got worse for Singapore when Aahan Achar spilled Collins Obuya over the rope for six on the Kenyan’s first ball. Obuya managed another six before being dismissed by Mahboob, having made 16 off 6 balls.

71* today for Irfan Karim, carrying his bat through the Kenya innings 👏 👏

With Kenya needing just 9 runs off 13 balls, Karim and Rakep Patel took their side home, with the opener finishing at 71* off 50 balls.

The result puts Kenya level with Singapore on points but ahead on net run rate. Singapore will play Papua New Guinea next, on Friday.