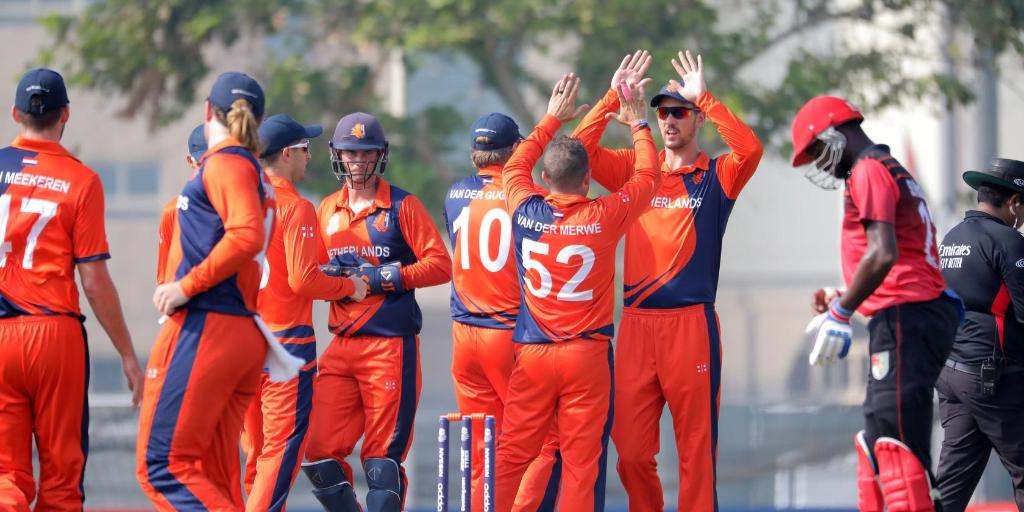 Singapore’s unbeaten run in the ongoing ICC T20 World Cup qualifier in the UAE came to an end with a 5 wicket loss to the Netherlands. Electing to bat first, Singapore began well with Tim David being promoted to the opening in the absence of Rohan Rangarajan.

David was the first to fall in the seventh over, bowled by Roelof van der Merwe for 19. By the eleventh over Singapore had lost both its openers, Surendran Chandramohan out for 28.

And that’s when the Singapore batting collapse started.

Aritra Dutta was the second highest scorer of the match for Singapore with 20 off 19 balls. Hero from the match against Bermuda, Navin Param fell for 13 off 15 balls.

Singapore are in a spot of bother against Netherlands in Dubai 😬 #T20WorldCup | #SCOvNAM | FOLLOW ⬇️ https://t.co/IkVv33AN4H pic.twitter.com/LdzIQHU0DA

They bowl Singapore out for just 101. The Dutch are on track for a third win in as many games.#T20WorldCup | #SINvNED | FOLLOW ⬇️ https://t.co/oLmqJrm2of pic.twitter.com/A1nqNlIrAM

With hardly any runs on the board to defend, Singapore needed to go all guns blazing when Netherlands began their chase.

Skipper Amjad Mahboob made an early breakthrough when he got rid of Tobias Visee in the second over for 5.

Selladore Vijayakumar struck next, getting rid of Ben Cooper for a duck.

But solid thirties by opener Max O’Dowd (35 off 31 balls) and Colin Ackermann (34* off 36 balls) meant that the Dutch held Singapore at bay for most of the match.

The men in red did manage to take 5 Dutch wickets in all but with just 101 runs to defend there was little for the Singapore bowlers to defend. The Netherlands winning by 5 wickets with 21 balls to spare.

Singapore play Kenya next, on October 23.