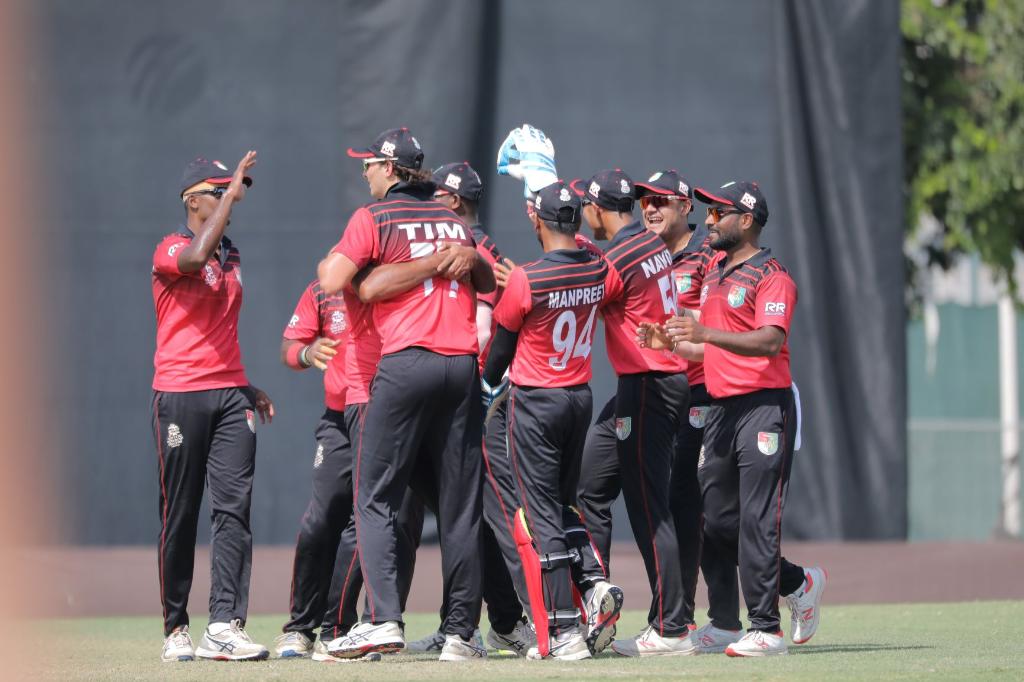 Singapore made it two wins in two matches in yet another thriller as they handed Bermuda a 5 wicket defeat in their second match of the ICC T20 World Cup in Dubai.

Bermuda have chosen to bat first against Singapore. They're looking for their first win of the tournament. #T20WorldCup | #BERvSIN | FOLLOW ⬇️ https://t.co/xT0YVjiYBq pic.twitter.com/2fTVb4IlTM

Winning the toss, Bermuda elected to bat first. It didn’t take long for Singapore to strike with skipper Amjad Mahboob picking up the wicket of Okera Bascome (4 off 14 balls) in the sixth over.

Dion Stovell was run out of the very next ball and Bermuda were struggling at 25/2. That soon became 29/3 when Sidhant Singh dismissed Delray Rawlins (1 off 8 balls).

Singapore have kept Bermuda all tied up so far.

Janeiro Tucker’s 50* off 34 balls and Terryn Fray’s 29 runs off 31 balls meant that Bermuda eventually managed 149/7 in their 20 overs. 19-year-old Janak Prakash was the pick of the Singapore bowlers with 3 wickets for 44 runs in his 4 overs.

Singapore’s chase began disastrously with Surendran Chandramohan out off the third ball of the innings. Singapore were soon 21/2 when Rohan Rangarajan was dismissed for 12.

Aritra Dutta (9 off 11 balls) and Tim David (15 off 20 balls) didn’t last long either, falling in consecutive overs and Singapore were in a little bit of trouble at 41/4 in the ninth over.

That’s when Navin Param stepped up. Ably assisted by Manpreet Singh (26 off 26 balls) at the other end, Param began slowly but soon found his rhythm.

Dropped when he was on 45, Param went on to score a half century to keep Singapore in the game. The equation came down to 22 needed of the last two overs.

Interesting finish on the cards in Dubai!

Param managed a six in the nineteenth over amidst singles which meant that Singapore needed 9 off the last to win. Param was on strike and smashed a six off the very first ball of the twentieth over to help the men in red breathe easier.

And then Prakash, who had already had a great day with the ball, finished it off with a four to hand Singapore a 5-wicket win.

Heartbreak for Bermuda, who fought hard all match, but Navin Param's 41-ball 72* helped Singapore recover in the chase and seal a five-wicket win!

Singapore will now play the Netherlands on October 22.

The two group-toppers qualify directly for the T20 World Cup first round which already has Sri Lanka and Bangladesh.

Teams finishing second and third face off in playoffs with the two winners taking up two more spots in the World Cup first round.

For the last two spots, the losers from the two playoffs will face the fourth-placed teams in the groups. The winners of those games go through to the first round of the tournament.