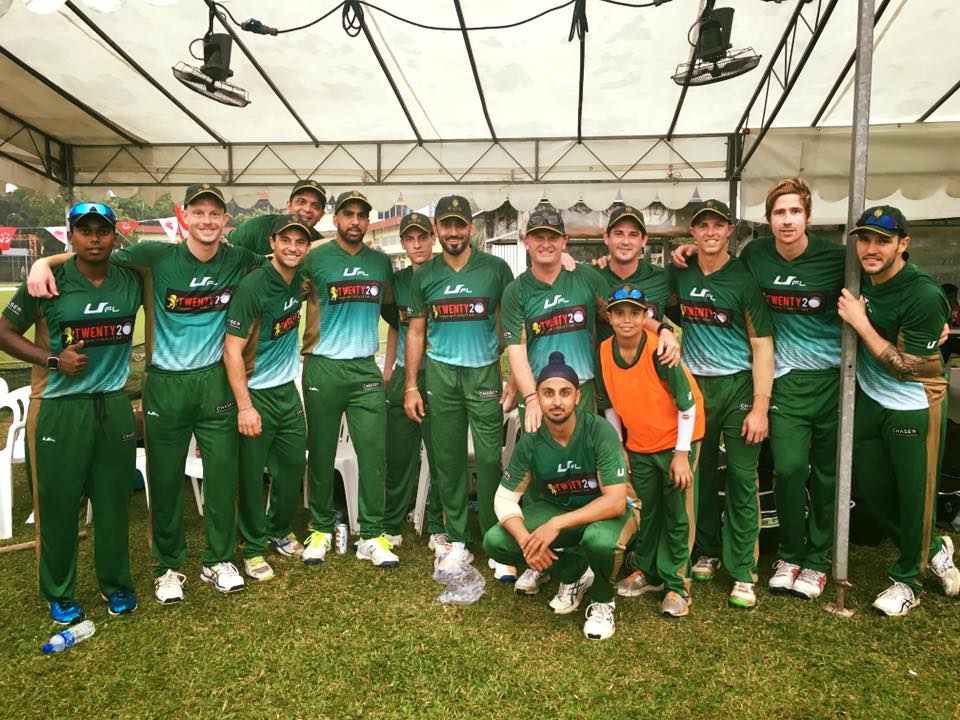 Members of the SCG XI are all smiles after emerging victorious in their first ever appearance at the SCC T20. Hosts SCC went down to them by 64 runs in a rain-affected game. Photo courtesy: SCC

The much-vaunted marquee stars failed to fire for the Singapore Cricket Club (SCC) as they suffered a comprehensive 68-run loss under the Duckworth-Lewis system to new entrants Sydney Cricket Ground XI (SCG XI) in their Group A match in the 5th International SCC T20 2017 at the Indian Association Ground in Singapore.

In a rain-hit match, SCG won the toss and elected to bat first. Opener Simon Keen was the top-scorer with 63 off 30 balls, ably supported by Cameron Merchant (38 off 30) and Dean J Crawford (36 off 19). For the host team, star bowler Muttiah Muralitharan proved expensive, with figures of 1/37 off his four overs. Parag Dahiwal took 3 wickets but gave away 39 runs in his spell. SCG finished with 178/6 in 20 overs. 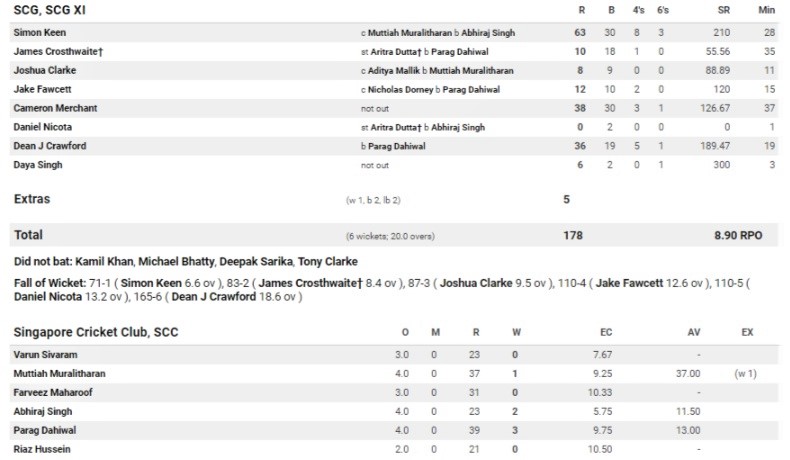 In response, SCC suffered a batting collapse, losing nine wickets with only 66 runs on the board. Leggie Daniel Nicotra took 3 wickets while Skipper Kamil Khan struck early to dismiss Nick Dorney (1) and danger man Farveez Maharoof (0). Murali emerged as the topscorer for SCC, blasting 23 off 8 balls. He was still at the crease when rain stopped play after 13 overs, with SCC score at 101/9. The Duckworth-Lewis system was applied and the hosts proved to be 68 runs short. 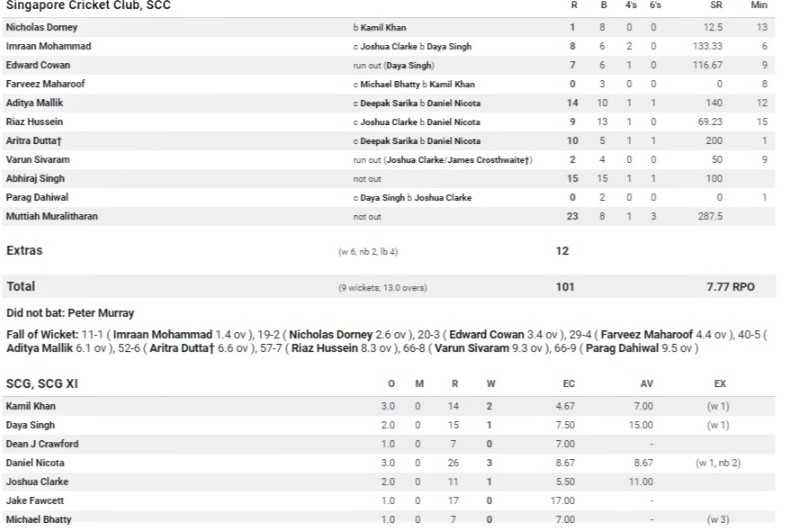 SCC will hope to rebound tomorrow in their next match, while SCG have shown that they will prove a challenge for the other teams in their bracket. 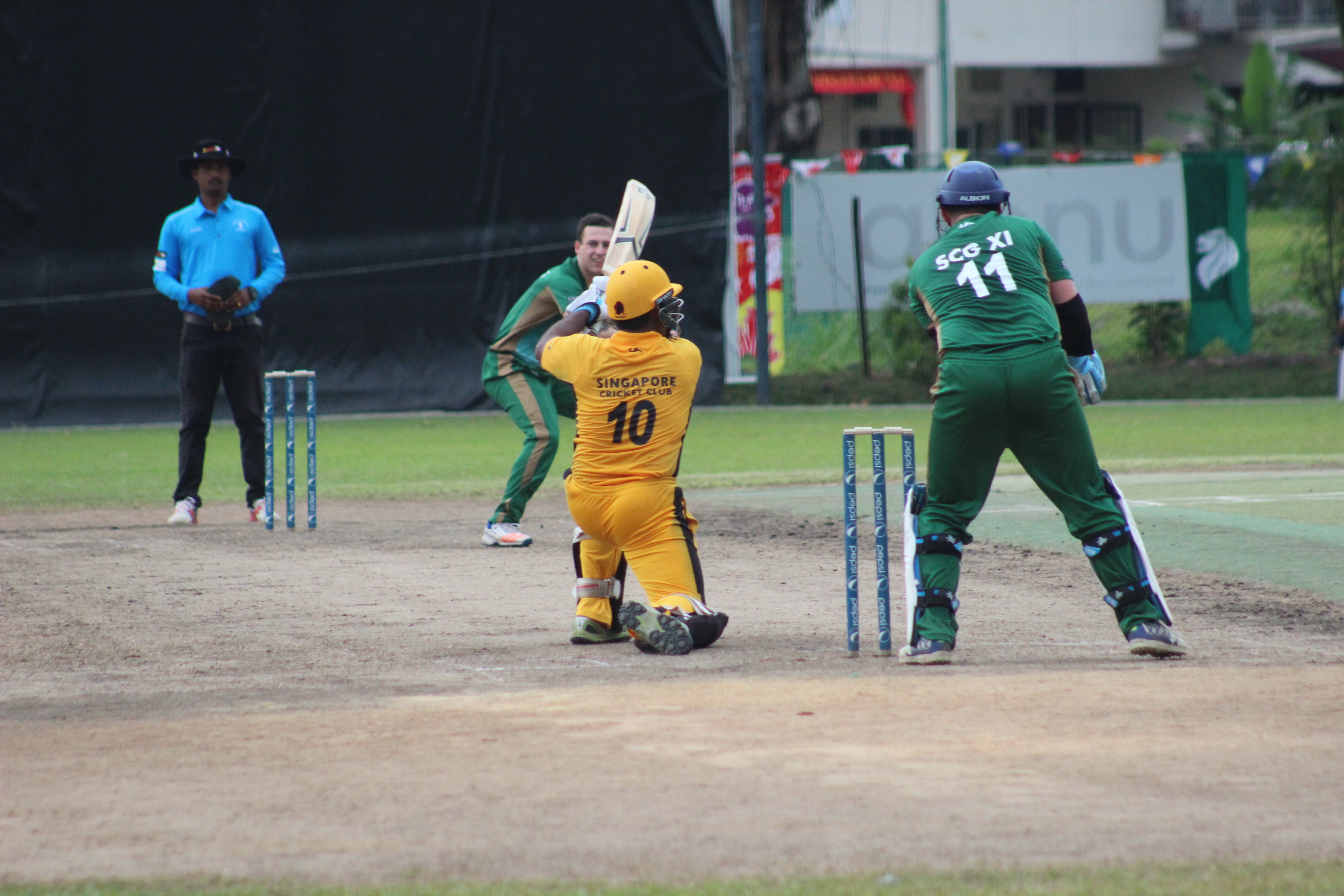