Indian-origin Muslim comedian Hasan Minhaj’s speech at the White House Correspondents’ Association Dinner tackled all the elephants in the room…including the one that skipped the event. Minhaj spoke out against US President Donald Trump biases and policies in a 25-minute speech at the event.

Trump, as his staff had repeatedly announced, chose to skip the event, the first time a sitting US President has been absent from the dinner since Ronald Reagan in 1981, and that was because the latter was recovering from an assassination attempt. 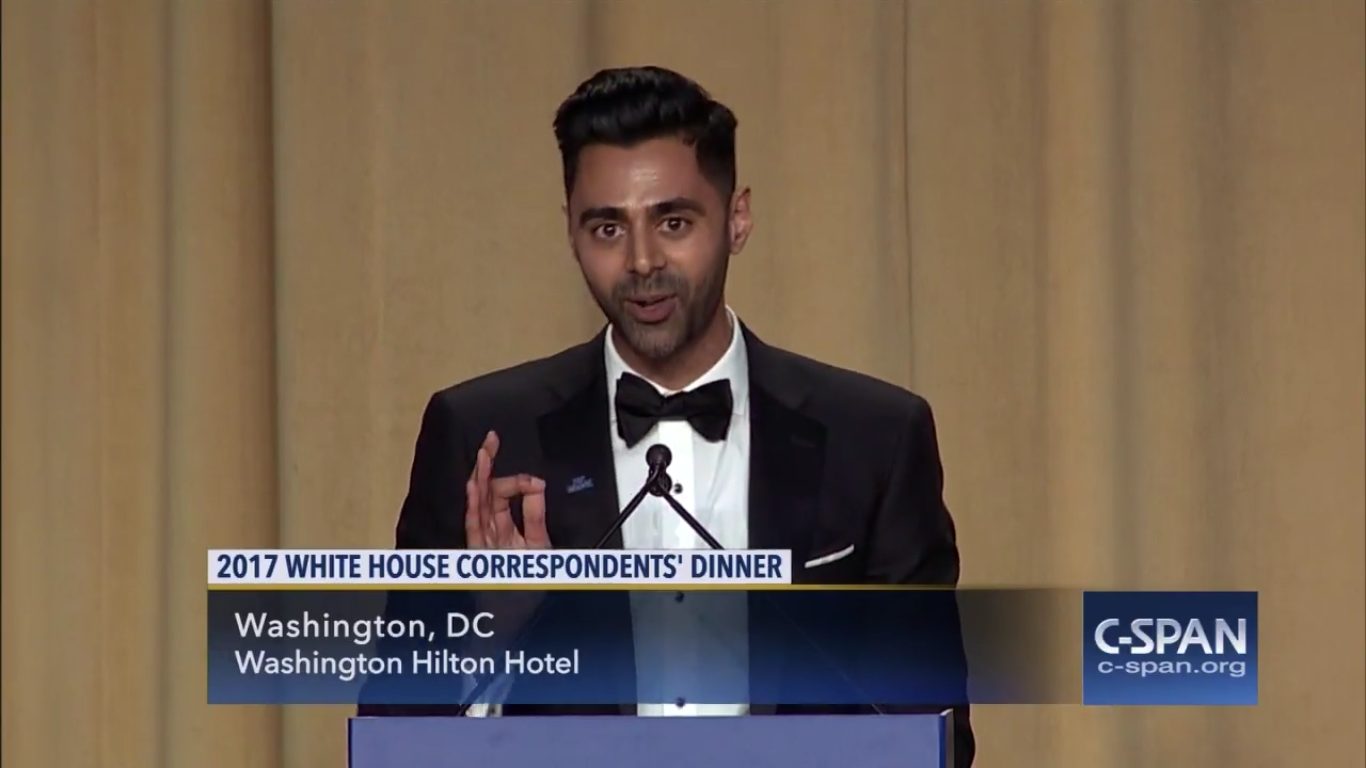 “The leader of our country is not here,” Minhaj said in his speech. “And that’s because he lives in Moscow, and it would be a very long flight. It would be hard for Vlad (Putin) to make it.” Minhaj was drawing attention to the Federal investigation into the ties of the Trump campaign with Russia. “As for the other guy,” he said, talking about Trump, “I think he’s in Pennsylvania because he can’t take a joke.”

Minhaj also took potshots at members of the Trump administration, calling attention to their gaffes in the first 100 days of the new Presidency. He joked about Vice President Mike Pence, White House Press Secretary Sean Spicer, media spokesman Kellyanne Conway, special advisor Steve Bannon and first daughter Ivanka Trump among others. In addition, he did not shy away from addressing the adversarial relationship between the President and the Press.

“We are in a very strange situation where there is a very combative relationship between the Press and the President,” he said. Highlights from Minhaj’s speech can be found below.

"I don't have a solution on how to win back trust. But in the age of Trump I know that you guys have to be more perfect now more than ever. Because you are how the President gets his news. Not from advisors, experts, intelligence agencies you guys. So you gotta be on your A game. Because if one you messes up, he blames your entire group.so now you know what it feels like to be a minority," he said, which drew a huge laugh.

Minhaj also took on the traditionally Presidential role of poking fun at various media organisations. After roasting Fox News, MS NBC and CNN, he went on to end on a stirring note, defending the First Amendment of the US Constitution and right to free speech.

“This event is about celebrating free speech and the First Amendment,” he said. “Only in America can a first generation Indian-American Muslim kid get on this stage and make fun of the President; the orange man behind the Muslim ban, And it’s a sign to the rest of the world that even the President is not beyond the reach of the First Amendment.” He closed with, “I would like to thank Woodward and Bernstein for inspiring this generation of journalists, and Donald Trump from inspiring the next,” which got him a standing ovation.

In Pennsylvania, Trump marked his first 100 days in office at a huge rally of his supporters, where he slammed the media and the event.

"As you know there's another big gathering taking place tonight in Washington D.C., did you hear about this? A large group of Hollywood actors and Washington media are consoling each other in a hotel ballroom in our nation's capital right now," Trump said. “Maybe we’ll go next year, and make it more exciting for them.”