Our Tampines Hub launched the Tampines Hari Raya Bazaar on May 27, which contained traditional and modern products, mouth-watering goodies, and the like. With performances by popular artists from Southeast Asia, Hari Raya Bazaar will be open until June 23 from 10 am to 10 pm daily.

The Hari Raya Bazaar is off to a roaring start! Come join us daily 10am-10pm from now to 23 June. See you there! #ourtampineshub #bazaar2017

The Manchester attack last Monday is a “grim reminder” of the uncertain times we live in, and drives home the importance of understanding, respect and peace between different groups of people, Finance Minister Heng Swee Keat said yesterday.Keat said yesterday.

Speaking at the launch of the Tampines Hari Raya Bazaar at Our Tampines Hub — one of his first major community events since he suffered a stroke a year ago — Minister Heng said the integrated facility can play a key role in forging a community of diverse cultures and beliefs.

“Our Tampines Hub is a place where families can come together, regardless of race, religion and background,” said Heng, who is also a Member of Parliament for Tampines. “We hope that the bazaar would be a celebration of Singapore’s multicultural community.”

This year’s bazaar features 120 stalls and, for the first time, participants from other parts of the world, including Brunei, Indonesia, Japan, Malaysia, Morocco and Uzbekistan. The hub, which opened in November, will also host bazaars for the mid-autumn festival and Deepavali later this year.

“I hope that, in our small way, we are helping to spread the message of understanding, respect and peace by bringing people of different customs and nationalities together,” said Heng. 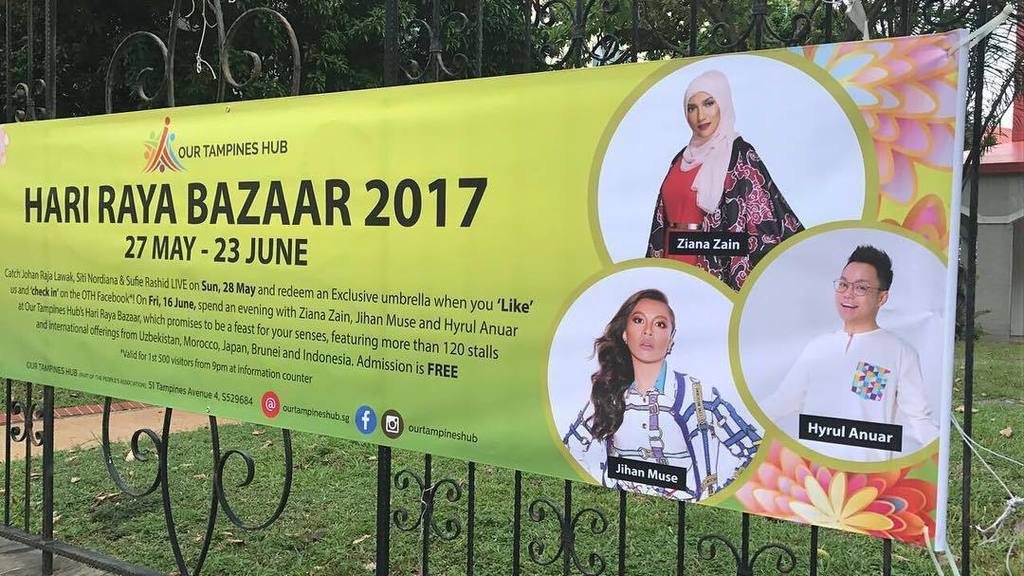 The minister had collapsed during a Cabinet meeting last May and was taken to Tan Tock Seng Hospital, where he underwent surgery to relieve pressure in his brain.

Speaking to reporters after the launch, Environment and Water Resources Minister Masagos Zulkifli, who is also an MP for Tampines, said Heng was “slowly transitioning” back into the community.

“I believe he is healthy, but as usual, when you are recovering from such a heavy illness as he had gone through, it is important for him to make sure that he must not, in the process, suffer from new ailments,” said Masagos.

“So let us give him time. I am sure he is happy to come back.”

Last month, Heng had posted pictures on Facebook of his interactions with Tampines residents and thanked them for their concern about his health.

Earlier this month, Heng was also in Japan for the Asean+3 Finance Ministers’ and Central Bank Governors’ Meeting, as well as the Asian Development Bank meeting in Yokohama.