Harassment over both LGBT and anti-LGBT views unacceptable: Shanmugam

In line with Pink Dot that is happening this Saturday, Law and Home Affairs Minister K Shanmugam made some points on his Facebook page with regards to several questions surrounding the event this year.

Besides that, Choong also told Shanmugam that sponsors of the Pink Dot event have been "harassed." The Law Minister assured him that "the government is strongly opposed to any harassment of any group, and will not hesitate to take action if harassment crosses the line and turns criminal."

Another issue that was highlighted was the security requirements imposed at the Pink Dot rally this year. It was in view of the security climate that the government had imposed additional measures. "Any large public gathering, with high profile, will be an attractive target" for terrorist attacks," said Shanmugam.

The minister then noted that subsequently, when he met up with some people "opposed to LGBT lifestyles," they had raised the same issue regarding harassment. According to them, LGBT groups have harassed people who do not support the cause, and young people in foreign financial institutions are facing pressure to support LGBT causes despite their personal beliefs.

"I gave them the same answer: harassment is not acceptable. If a line is crossed, action will be taken. And POHA offers civil remedies," Shanmugam said.

Meanwhile, comments on the Facebook post highlighted that events opposed to Pink Dot, since they are essentially anti-LGBT, "should not be allowed for the same reasons we would not allow an event in opposition to certain races." 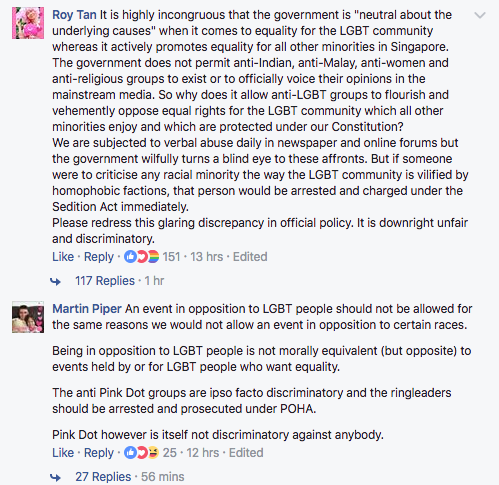