A gurudwara in Canada was  spray-painted with ‘racist’ graffiti and profanity by some unidentified People, as reported by a leading daily. Police is reportedly treating the case as a hate crime. The racist graffiti includes a swastika and profanity. 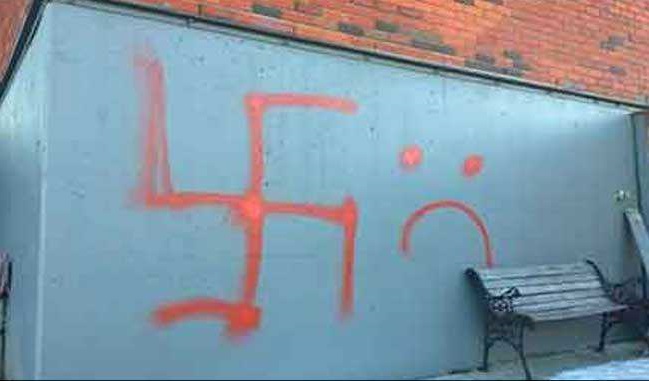 While condemning the attack, Tejinder Singh Sidhu, Vice President for Alberta, World Sikh Organization of Canada, said, while we are saddened to see the racist vandalism of the Sikh Society of Calgary, it comes at a time when we are seeing racist, Islamophobic and anti-Semitic vandalism in several places across Canada.

These deplorable acts are motivated by ignorance and all Canadians must stand in solidarity to ensure that racist and discriminatory rhetoric is loudly rejected.   The Sikh community has always responded to such incidents with education and outreach and we will be doing so again this time with the support and cooperation of the local community."

The WSO has urged community members to stay vigilant and report any suspicious activity around gurdwaras to the authorities.

In January 2015, a gurdwara in Edmonton was spray-painted with racist graffiti and earlier this year, racist-anti Sikh posters were posted at the University of Alberta.

No wonder Sikhs in the UK are urging for a separate identity and looking for safe corners.  The UK Sikh Survey 2016 reveals how and why Sikhs refrain from being described as ‘Indian’ or ‘Asian’ and prefer a separate ethnic category created for Sikh identity.