‘Guards at the Taj’ is a brilliant, chilling dark comedy

Playwright Rajiv Joseph's award-winning play - Guards at the Taj - comes to Singapore. Thanks to the Singapore Repertory Theatre (SRT).

Rajiv Joseph, an Indian-American playwright, and a 2010 Pulitzer Prize finalist won the 2016 Obie Award for Best New American Play for Guards at the Taj.

Hailed as a brilliant and chilling dark comedy woven around the famous architectural marvel of the Mughal Empire - 'the Taj Mahal'. Behind the shining white and imposing marble façade of this world-famous symbol of love lies the dark myth that the Mughal emperor Shah Jahan, the man who commissioned the project, ordered cutting the hands of 20,000 workmen, determined to prevent another monument rivaling its beauty to ever be built again.

The play unfolds through the viewpoint of two guards who stand sentinel outside the Taj Mahal before it is unveiled. They fight the urge to look at it before emperor Shah Jahan sets eyes on it for the first time. 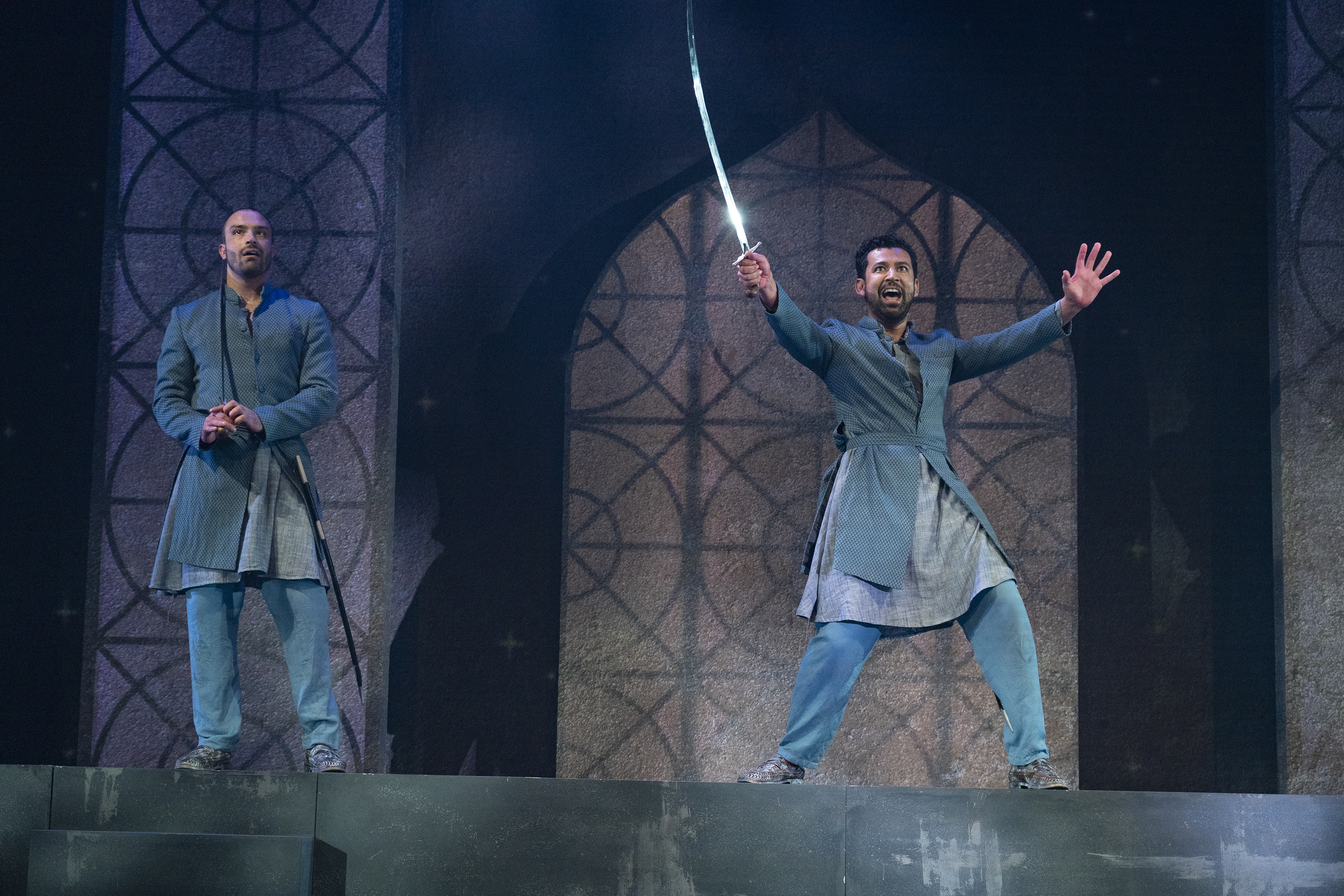 The play 'Guards at the Taj' unfolds through the viewpoint of two guards who stand sentinel outside the Taj Mahal before it is unveiled. Photo courtesy: Singapore Repertory Theatre

The award-winning play, which premiered in New York in 2015, explores the price of beauty, duty and friendship through the eyes of two imperial guards, who start by engaging in a series of comical, philosophical musings. 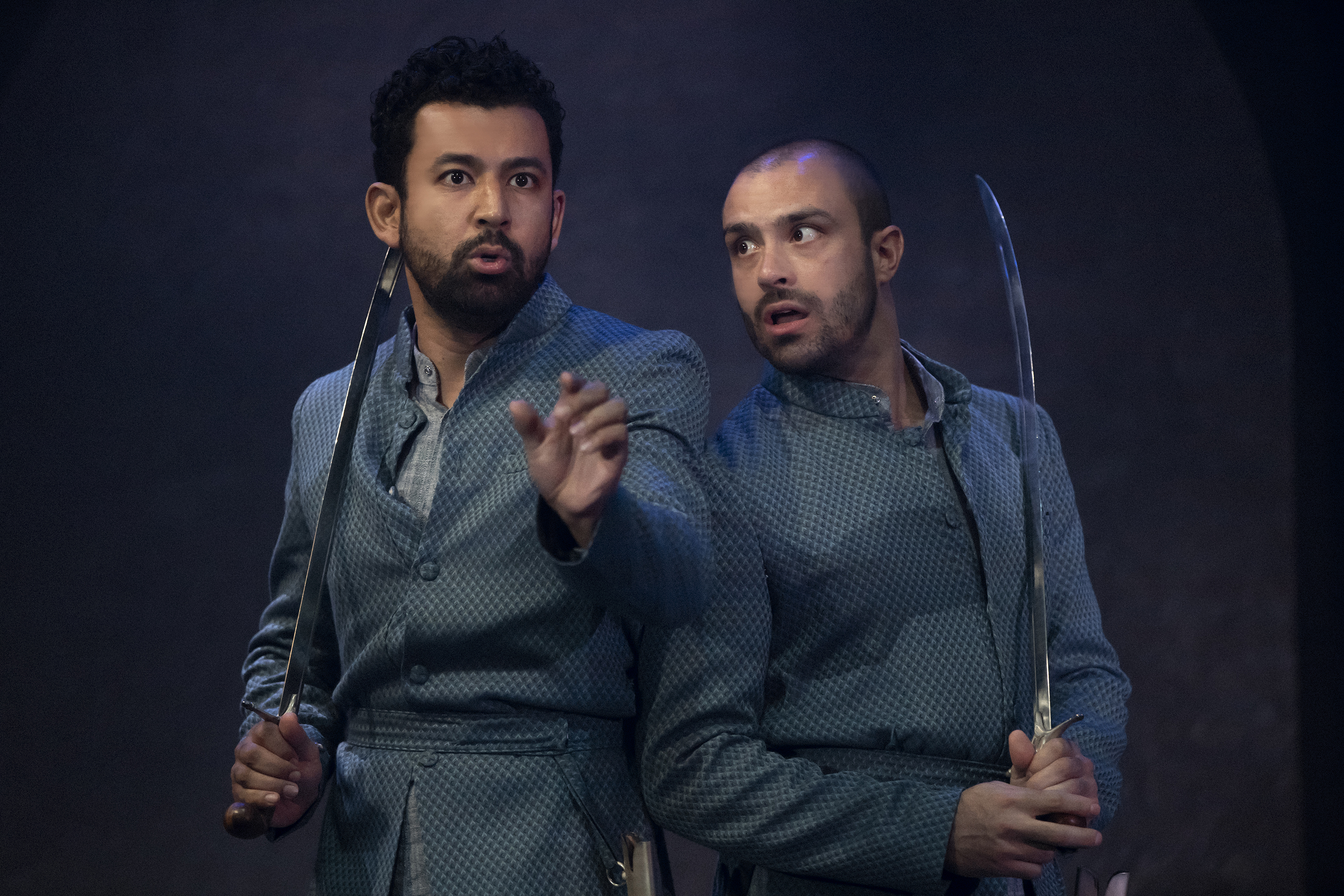 Ghafir Akbar plays the character of Humayun while Jay Saighal essays the role of Babar in the play 'Guards at the Taj'. Photo courtesy: Singapore Repertory Theatre

Described by the Washington Post as “fiendishly good”, the play features two long-term friends, Humayun and Babur, who stand guard at the Taj Mahal hours before it is to be unveiled to the public for the first time. Among the Sacred Oaths of the Mughal Imperial Guards, they are forbidden to look at the monument, speak or lower their swords.

But Humayun’s obedience is challenged by Babur’s dangerous babblings and events soon spiral out of control. The play reaches a turning point as the guards are ordered to do the unimaginable and their friendship is tested to its limits. 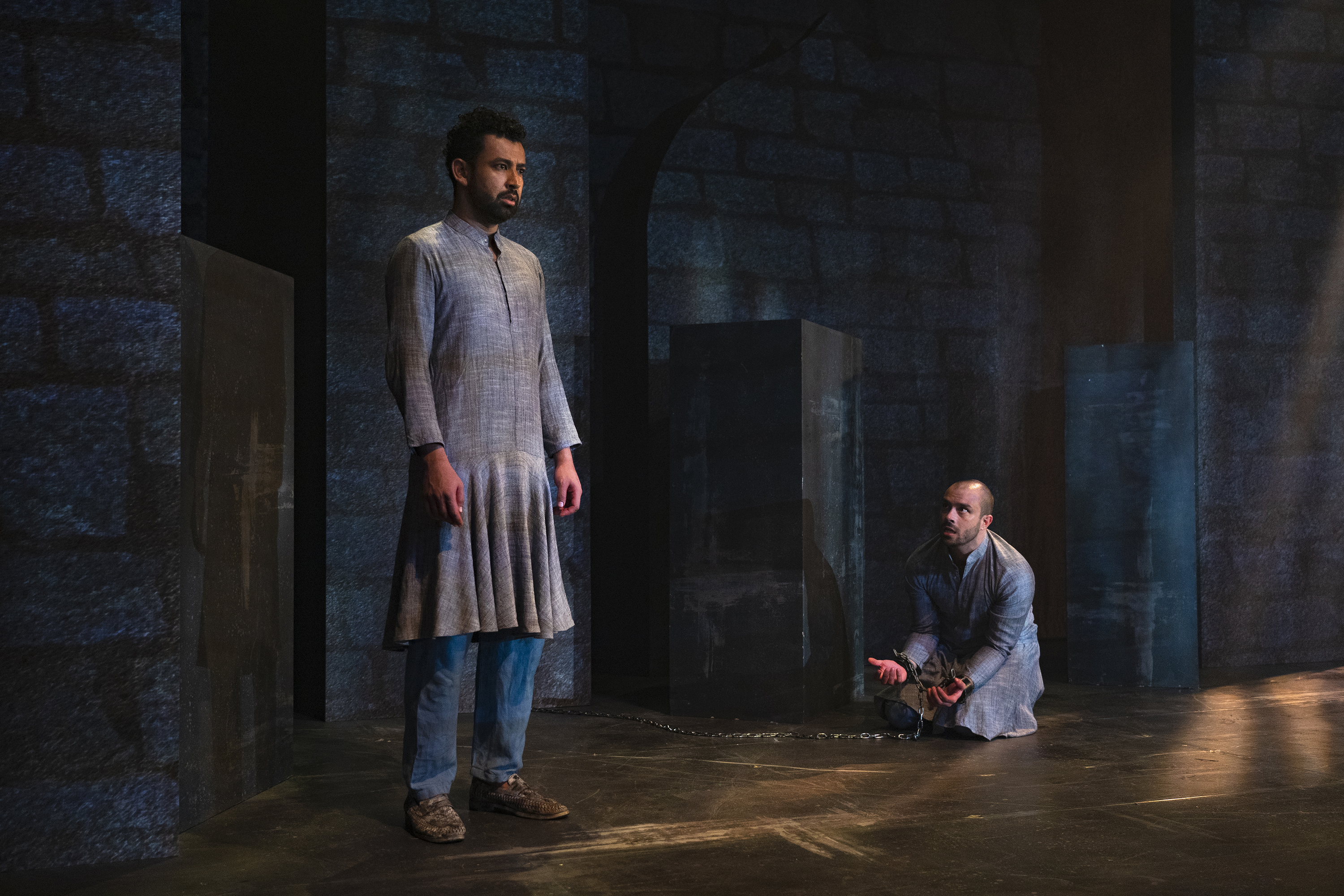 'Guards at the Taj' has been written by famous American playwright Rajiv Joseph. He is also a 2010 Pulitzer Prize finalist. Photo courtesy: Singapore Repertory Theatre

The impact of the play has been deepened with the help of a beautiful set, here given a minimalist touch by Petrina Dawn Tan with twinkling stars and hues that change to reflect the time of day.

Petrina Dawn Tan’s lighting and Brian Gothong Tan’s multimedia projections help bring each scene to life – one can envision and believe that one is standing outside the Taj with the celestial stars hanging in the clear night sky, while projection mapping technology is effectively used to create textured brick walls and the gloomy atmosphere of a palace dungeon. 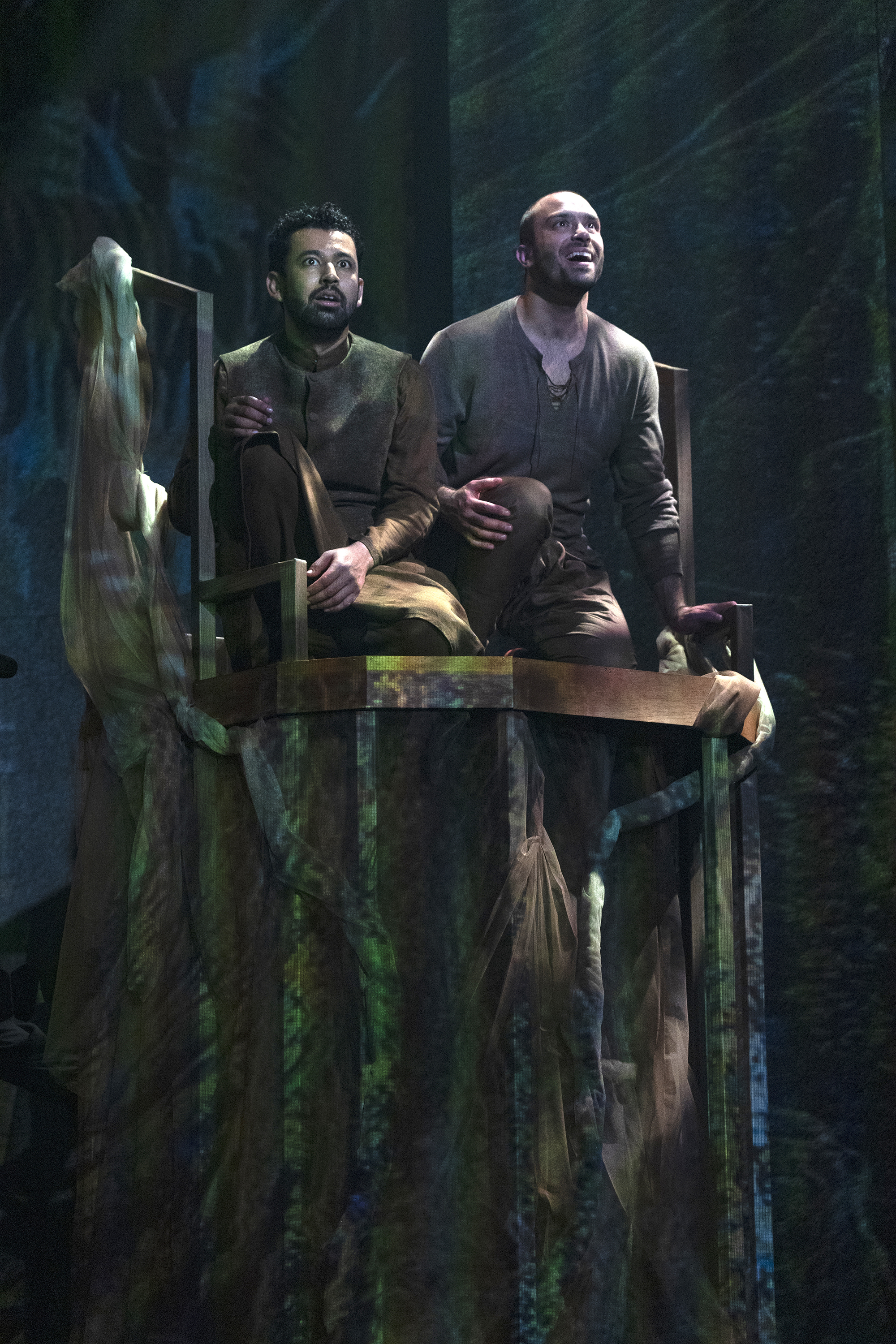 Jay Saighal is a British actor who has worked on the stage and screen. He most recently wrapped on Ackley Bridge for Channel 4.  His theatre credits include Imperium Parts I and II, Othello and The Merchant of Venice (RSC), As You Like It (National Theatre), Macbeth and Romeo and Juliet (NT Learning), The Cardinal (Southwark Playhouse), Aladdin (SJT) and Ross (Chichester Festival Theatre). His screen credits include The Split (BBC One) and Spotless (Canal Plus). 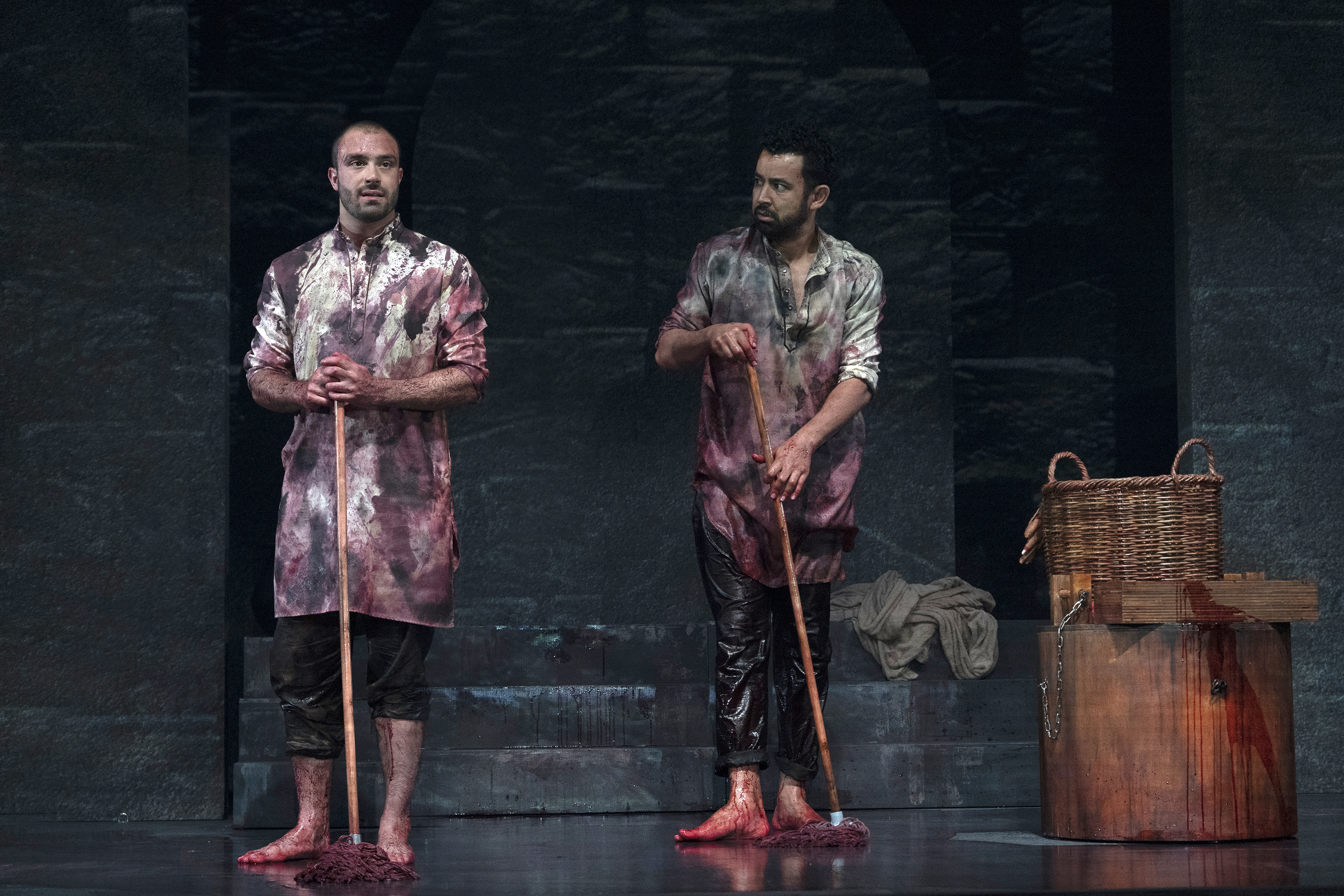 Jay Saighal is a British actor who has worked on the stage and screen while Ghafir is a Malaysian actor. Photo courtesy: Singapore Repertory Theatre

Jay holds an MA in Acting (Guildhall School of Music and Drama) and a BA in English and Theatre Studies (University of Warwick). Guards at the Taj  marks Jay's first performance in Singapore.

Ghafir is a Malaysian actor recently seen as Brutus in SRT’s Julius Caesar and Cake Theatrical’s Temple. Other credits include Medea, Being Haresh Sharma (Cake); Hotel (SIFA, OzAsia), Another Country and Public Enemy (Wild Rice); Disgraced (SRT); Those Who Can’t Teach (TNS); and The Good, The Bad, and the Sholay (Checkpoint Theatre).