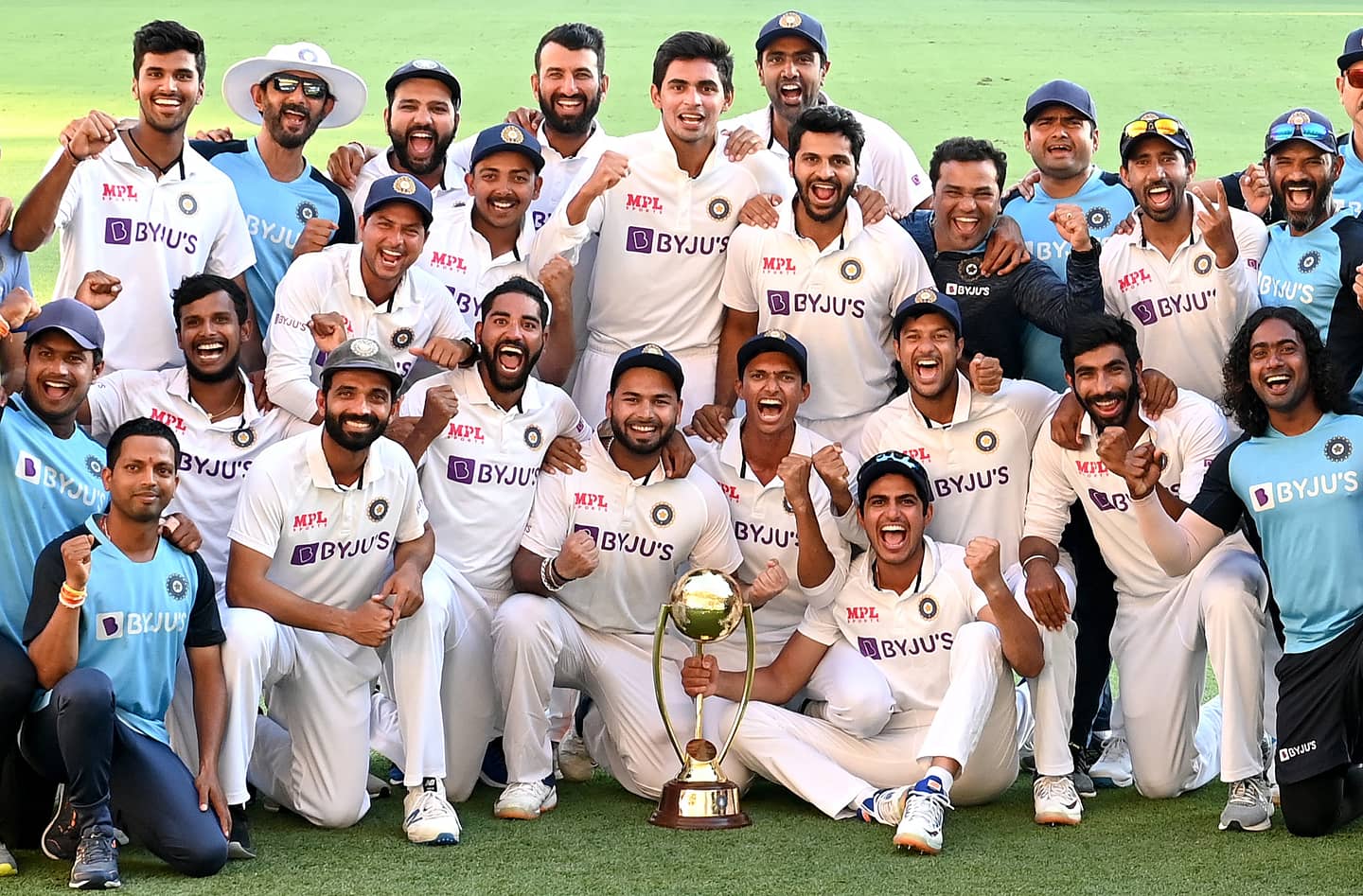 This was India’s list of missing players as they went into the fourth and final Test against Australia in Brisbane:

Suffice to say India played with a team that had a very different look to it - a bowling attack led by Mohammed Siraj, T Natarajan, Shardul Thakur, an injured Navdeep Saini and debutant Washington Sundar and a batting line-up that consisted of Shubman Gill with one Test under his belt prior to this game and Rishabh Pant and Mayank Agarwal who have collectively played under 50 Tests. Rohit Sharma, Cheteshwar Pujara and Ajinkya Rahane brought the only semblance of experience to the squad. In fact, the Playing XI for the Brisbane Test consisted of five players who had made their debut during this series.

However, over the course of the last five days, fans have watched in delight as this inexperienced bowling side picked up 20 Australian wickets and the young batsmen confidently dominated the lethal Aussie bowling to ultimately register a historic win at the Gabba and wrap up the Border-Gavaskar series 2-1.

Since the start of the Test series in December, the Australians have hit India with whatever they’ve got - body blows with the ball, unpleasant chatter from the field and questionable tactics like Steve Smith scuffing up Pant’s guard line. This was in addition to complaints from Indian fielders of racist chants from the stands.

However, this team of young cricketers, who play an aggressive and confident brand of cricket, doesn’t shy away from a challenge and if this series proved anything, it is that the Indian reserves are deeper today than they have perhaps been in India’s cricketing history.

With the series tied at 1-1, India went into the Brisbane test with a little less pressure than Australia - a draw in the fourth Test enough for them to retain the Border-Gavaskar Trophy. But this team doesn’t play for a draw.

Siraj and co. came out roaring, confident of taking 10 wickets, not once but twice. Australia were dismissed for 369 in their first innings - a decent total but one that the Indian bowlers could be proud of themselves for restricting Australia to - Natarajan, Thakur and Sundar picking up three wickets apiece.

When it came to the batting - from Rohit Sharma to Rishabh Pant (with Gill, Pujara, Rahane and Agarwal in between) all failed to cross 50. And just when it seemed that 369 might just have been too many runs on the board, the Indian middle order stepped up. Half-centuries by Sundar and Thakur meant that when India were dismissed for 336, they only trailed Australia by 33 runs.

Mohd Siraj has been drawing accolade upon accolade since the time he made his Test debut on December 26, 2020 as an injury substitute. And this Test was no different. He managed only one wicket in the first innings but he was on fire in the second, walking away with a five-for in just his second ever Test match.

Thakur kept him company with 4 wickets of his own as the Indian bowlers once again claimed 10 Aussie wickets, dismissing the hosts for a mere 294.

328 runs stood between India and a series win and the batsmen attacked the run chase with gusto. 91 by young Shubman Gill, a level-headed and well calculated 89* by Pant and a stable, wall-like knock of 56 off 211 balls by Pujara saw India win an incredible game of Test cricket on Day 5.

An outstanding knock from Shubman Gill comes to an end on 91. The elegant batsman misses out on a maiden ton. He batted for 146 balls, hit 8x4, 2x6 and shared a 114-run stand with Pujara. #TeamIndia #AUSvIND

Another fine FIFTY for @RishabhPant17. His 4th in Test cricket.

This is Australia’s first Test loss at the Gabba in 32 years and also the highest successful run chase at this ground.

For a team that suffered the ignominy of 36 all out in the second innings of the first Test in Adelaide, this was the fairytale ending that they had hoped for. Bruised and battered, Team India showed courage, grit and determination that reflected in the joy on each face as they lifted the Border-Gavaskar trophy once again.

WHAT A WIN!!! Yessssss. To everyone who doubted us after Adelaide, stand up and take notice. Exemplary performance but the grit and determination was the standout for us the whole way. Well done to all the boys and the management. Enjoy this historic feat lads. Cheers 👏🏼🇮🇳 @BCCI pic.twitter.com/CgWElgOOO1

Just a remarkable win...To go to Australia and win a test series in this way ..will be remembered in the history of indian cricket forever ..Bcci announces a 5 cr bonus for the team ..The value of this win is beyond any number ..well done to every member of the touring party..

EVERY SESSION WE DISCOVERED A NEW HERO.
Every time we got hit, we stayed put & stood taller. We pushed boundaries of belief to play fearless but not careless cricket. Injuries & uncertainties were countered with poise & confidence. One of the greatest series wins!
Congrats India. pic.twitter.com/ZtCChUURLV

No matter what happens, we shall always play like the team called INDIA! 🇮🇳
You don't get to see such performances everyday. Take a bow champs!#AUSvIND pic.twitter.com/eiBDsgt04S

Undoubtedly, one of the best series I've been a part of. Everyone stood up to the challenge when it mattered the most; a sign of a champion team.
LOVE THIS TEAM! 🙌🏻#TeamIndia #DownUnder #AUSvIND pic.twitter.com/FHQ8xayyUA

Congratulations #TeamIndia 🇮🇳 Absolute superstars all of you 👏👏 A proud and historic moment for Indian cricket! Battered, bruised, but champions as well 🏆

What a Test match! The depth of Indian Cricket is scary. @RishabhPant17 , sweet number 17. Well played young man. #testcricket at its very best

Test cricket’s heart is beating strongly! That was an extraordinary win @BCCI & a fantastic series to watch. Aussies not lost at The Gabba since 1988. Wow

Only issue with India beating Australia in such an INCREDIBLE manner, is that the Test was played in Brisbane.
A city that doesn’t deserve an event so good! 🤣

Pant - the boy who turned into a man today in Australia, in cricketing terms!

Wow .. That has to go down as one of the greatest if not the greatest Test victory of all time !! Egg on my face over here in the UK .. but I love to see character & skill .. India have it in abundance .. btw @RealShubmanGill & @RishabhPant17 are future superstars ! #AUSvIND

We are all overjoyed at the success of the Indian Cricket Team in Australia. Their remarkable energy and passion was visible throughout. So was their stellar intent, remarkable grit and determination. Congratulations to the team! Best wishes for your future endeavours.

One of the greatest test series wins ever. Congrats India and well played Australia, what a series #INDvsAUS

Happy Endings come after a story with lots of ups and down. #HistoricWin