Journalists have an important role to play in strengthening India-UK relations post-Brexit as much has to be done in the fields of trade, investment and culture, leading NRI industrialist GP Hinduja has said. 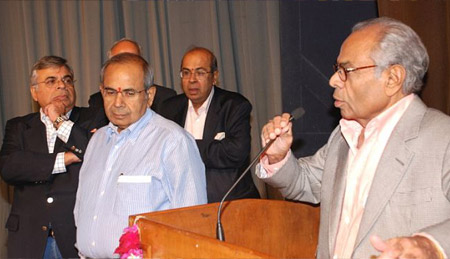 Speaking at a function organised to celebrate the 70th anniversary of the Indian Journalists’ Association (IJA), a representative body for UK-based correspondents and journalists reporting, Hinduja said, "Journalists should bring out a journal which could provide good analysis of various issues involving the UK-India relations."

"IJA has to play an important role post-Brexit as so much has to be done in the fields of trade, investment and culture. They are real challenging time to the media," he said.

Kartar Lalvani, founder-chairman of Vitabiotics, described it as a "landmark event" as the IJA has seen how the UK-India relations flourished over the last 70 years.

Joginder Sanger, chairman of Bharatiya Vidya Bhavan spoke about the contributions of NRIs in building the UK-India relations.

Ashish Ray, president of IJA, recalled the contributions of founders of the IJA and steps taken over the last seven decades to ensure that it functioned independently providing authentic information back home.

The UK's withdrawal from the EU, commonly called "Brexit", is the result of a majority of British voters deciding to leave the EU in the referendum on the issue on June 23, 2016.

Hinduja had last year described the Brexit result as 'positive' for India-UK ties, while saying that bilateral trade and investment will eventually grow. The co-chairman of the Hinduja Group described the referendum as an 'essential democratic process', which could eventually prove beneficial for Britain's trade with India.

"There will be a greater focus on India and the emerging markets and among the emerging markets, India will be the favourites. Trade and investment will eventually grow and in terms of visa norms, which had been stricter because of the EU rules, should also ease up for Indian businesses," he said.