Salman Khan might have his army of Salmaniacs thronging the theatres every time there is a Bhai film playing, but that doesn't necessarily help the superstar's credibility as an actor.

A recent case in point, searching for the 'worst Bollywood actor' on Google throws up the name of Salman Khan. 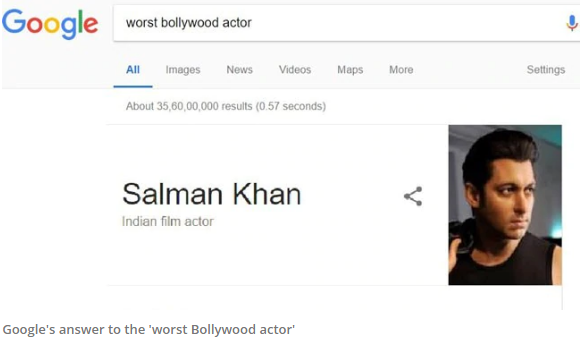 While people might have their misgivings about such a tag, it is not the first time that Google has answered such mind-boggling questions about Indian celebrities. Searching for 'feku' on Google, for example, shows Prime Minister Narendra Modi.

We do not know whose nefarious schemes Salman Khan has fallen prey to this time around, but critics seem to  agree with Google’s search engine after seeing him 'act' in his latest 100-crore film, Race 3.

Salman, who stars as Sikandar in Race 3, has single-handedly ensured both box-office numbers and brickbats for the film. Directed by Remo D'Souza, Race 3 is the third film in the franchise and is easily its worst.

The film has been brutally torn apart by critics but that has hardly made a dent in Salman's stardom.

While Bhai's fans worship him for launching two rockets together in Race 3 in that epic scene, it might be a little tougher to sway Google's opinion of him.