Leaders from across the globe came forward to congratulate India on the occasion of its 76th Independence Day. 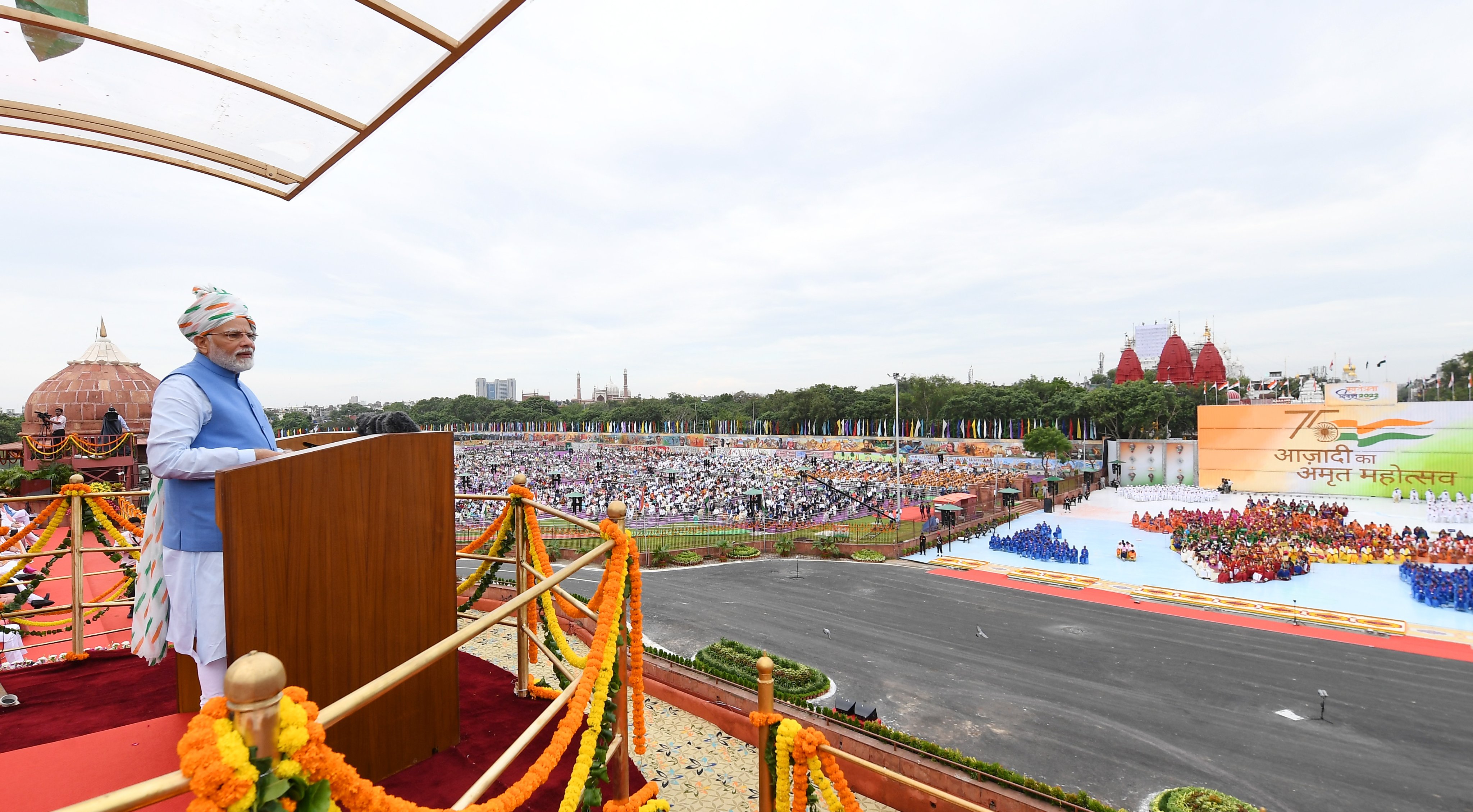 At the historic Red Fort in Central Delhi, Prime Minister Modi in his Independence Day address to the nation stated that it is a historic day for India as it takes a new path, new pledge with renewed strength. Photo courtesy: Twitter/@narendramodi

"As India celebrates its 75th Independence Day, I congratulate @narendramodi for prioritising healthcare and digital transformation while spearheading India's development. India's progress in these sectors is inspiring and we are fortunate to partner in this journey. #AmritMahotsav," the tweet stated.

At the historic Red Fort in Central Delhi, Prime Minister Modi in his Independence Day address to the nation stated that it is a historic day for India as it takes a new path, new pledge with renewed strength.

"We have to work with the vision of accomplishing what our freedom fighters dreamt of. By 100 years of independencee, for the next 25 years we need to focus on the 5 resolves - 1. Viksit Bharat (Developed India), 2. Removing every ounce of Gulami (slavery) in us, 3. Work on the pride for our glorious heritage, 4. Ensuring Unity amonst all, 5. Fulfilling our fundamental Duties," PM Modi said.

UK caretaker Prime Minister Boris Johnson extended wishes to the people of India on the occasion and highlighted the thriving Living Bridge between the two countries.

"Congratulations to the people of India on 75 years of independence. During my recent visit to Gujarat and New Delhi, I saw for myself the thriving Living Bridge between our countries. I look forward to seeing these bonds go from strength to strength in the next 75 years," tweeted Johnson.

French President Emmanuel Macron congratulated India. "Dear friend @NarendraModi, dear people of India, congratulations on your Independence Day! As you proudly celebrate India's stunning achievements in the past 75 years, you can count on France to always stand by your side," he tweeted. 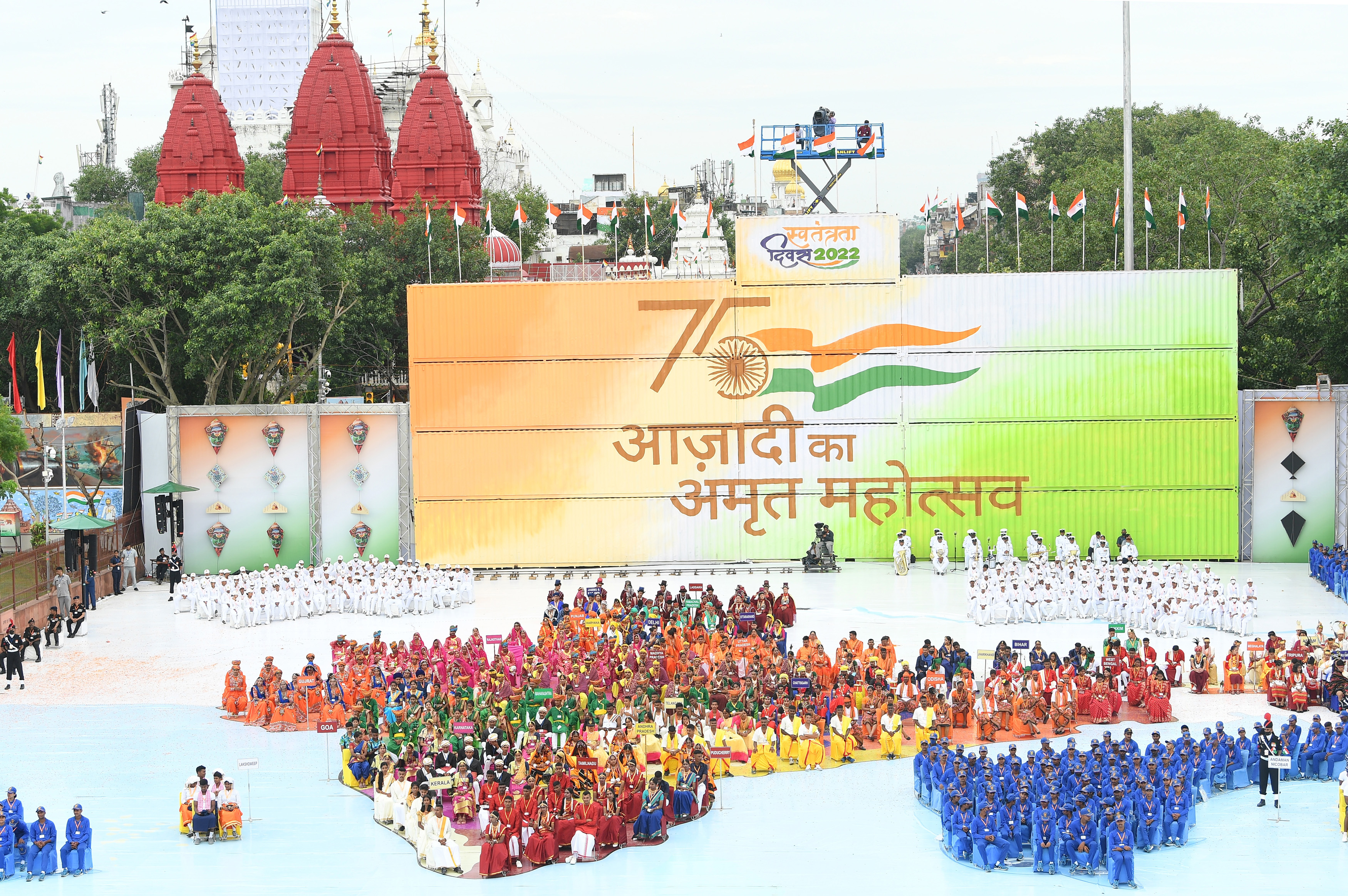 The Indian government had launched and organised multiple events under the 'India at 75' and 'Azadi ka Amrit Mahotsav' campaigns throughout the year to commemorate 75 years of Indian Independence. Photo courtesy: Twitter/@narendramodi

US President Joe Biden also extended wishes to India on the occasion. "As people around the world, including nearly four million proud Indian-Americans, celebrate the 75th anniversary of India's independence on August 15, the United States joins the people of India to honour its democratic journey, guided by Mahatma Gandhi's enduring message of truth and non-violence," stated the US President.

Russian President Vladimir Putin congratulated Indian leadership and its people on the occasion of its 76th Independence Day.

"Please, accept warmest congratulations on the occasion of the 75th anniversary of India's independence. Over the decades of independent development, your country has achieved universally recognized success in the economic, social, scientific, technical and other fields. India rightfully enjoys considerable prestige on the world stage and plays an important constructive role in resolving pressing issues on the international agenda," he said.

The Embassy of Japan presented a vocal and instrumental rendition of India's national anthem.

"Namaskar, on the occasion of India having completed 75 years of her independence, I wish to express my sincere congratulations to the people of India. My Embassy staff members both Indian and Japanese will now present a joint performance of the national anthem of India to celebrate this happy occasion together. I hope you will enjoy it," said the Japanese Ambassador to India Satoshi Suzuki in a video message.

"Minister for Foreign Affairs Hon. Dr Narayan Khadka extends warm greetings and felicitations to EAM @DrSJaishankar on the happy occasion of the 76th Independence Day of India," the Ministry of Foreign Affairs of Nepal tweeted on Twitter.

Sri Lanka extended its heartiest congratulations to the people and the Government of India.

“Wishing India a wonderful 76th #IndependenceDay! Many remarkable achievements by our dearest friends. Glad India continues to forge ahead & realise its immense potential & Singapore continues to be part of its growth story. Looking forward to scale new heights together,” tweeted Singapore in India.