History has repeated itself in 'the city that never sleeps'. A gaping sinkhole that opened up on a Bronx street after severe storms swallowed an entire van in US, two years after a similar incident involving an SUV. 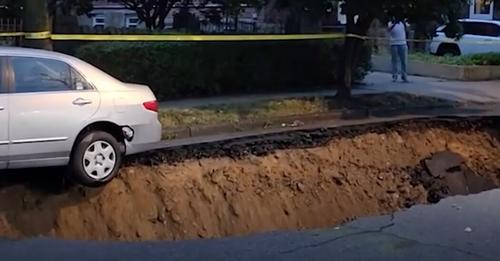 Crews had to work through the night to fill the gap in the road in a bid to prevent further accidents. Photo courtesy: Twitter/@Raymond_LLM

Video of the van falling into the sinkhole went viral on social media. The short clip shows the vehicle parked at the side of the road. It suddenly starts to lean to the left as the pavement collapses beneath it. The very next second, the entire vehicle plunges into the hole.

Crews had to work through the night to fill the gap in the road in a bid to prevent further accidents.

The New York City Department of Environmental Protection responded to the incident and crews worked through the night to repair the 58-foot long, 15-foot wide, and 20-foot deep hole.

In 2020, a picture from New York City went viral on social media highlighting the problems of uncovered sinkholes in urban areas.

The sinkhole was a massive one that swallowed an unoccupied SUV in New York's Queens borough.

Locals feared the occupants of the car were badly injured in the incident. However, the Fire Department of the City of New York (FDNY) said they responded to the reports of trauma and found the SUV was empty at the time of the incident.