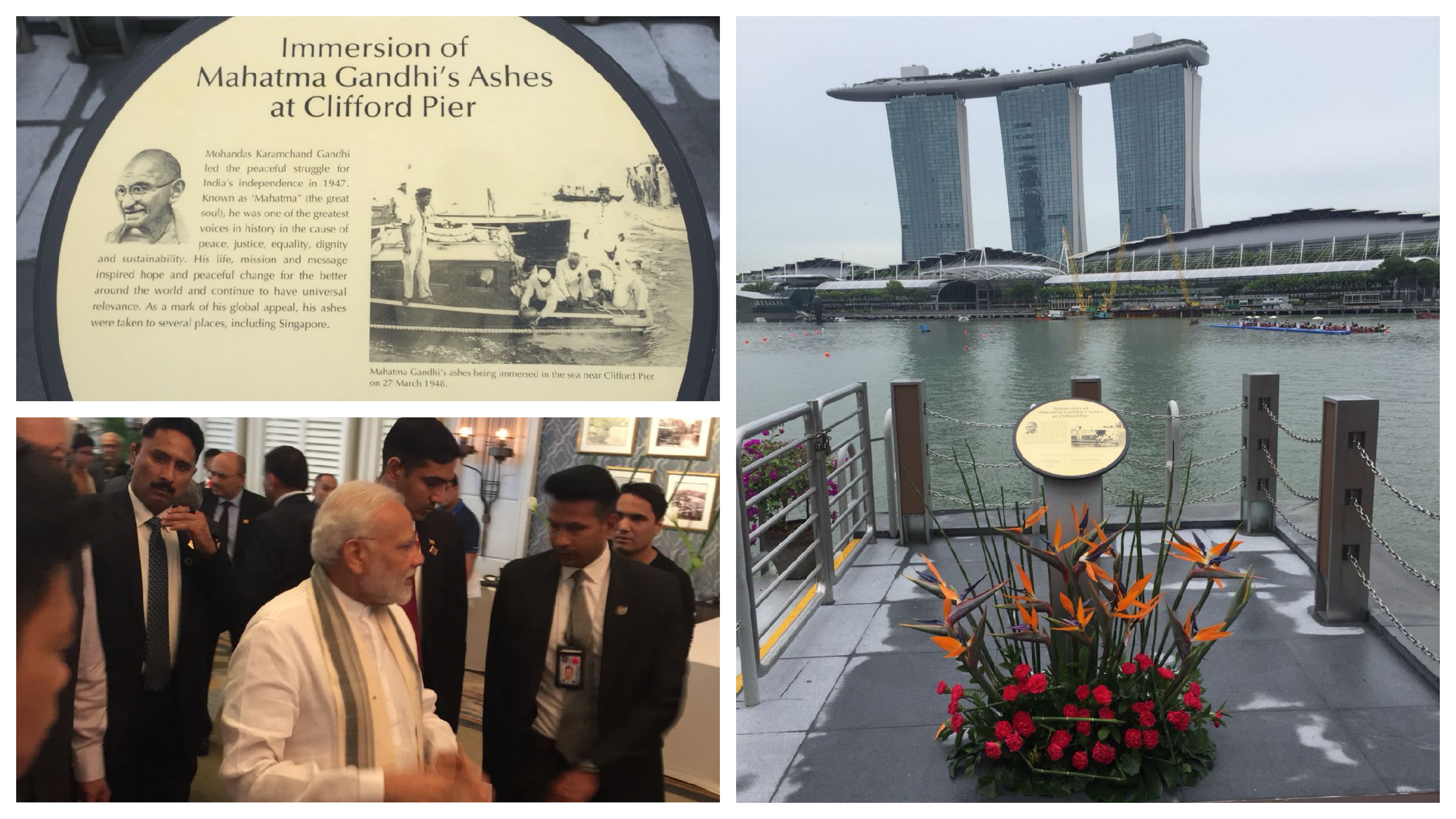 (Clockwise from left): A close-up of the plaque; a view of Marina Bay from Clifford Pier with the plaque in the foreground; PM Modi arrives at the Fullerton Hotel for the unveiling ceremony. Photos: Connected to India

70 years ago, the world lost a great soul.

One that had brought the concept of Ahimsa (non-violence), which not only had a profound impact on Indian thought and philosophy since the ancient times but reach beyond the subcontinental shores.

Mahatma Gandhi’s belief that true democracy can only be the outcome of non-violence had influenced various peace activists in the 20th century, including Nelson Mandela and Dr Martin Luther King. 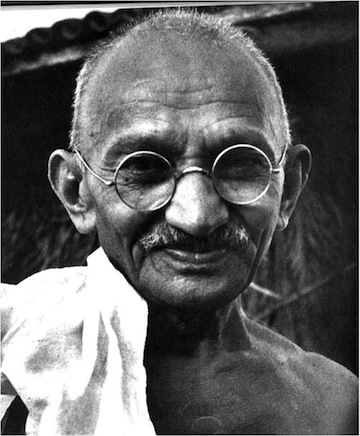 After he was shot by Nathu Ram Godse in New Delhi on Jan 30, 1948, Gandhiji’s body was cremated and his ashes were divided into several urns. One of them arrived in Singapore on the night of March 15, 1948 at Kallang Airport on a Malayan Airways flight.

The urn was placed at the Victoria Memorial Hall. Singaporeans from all walks of life came to pay tribute to the Indian leader. On March 28, the ashes were then ceremonially scattered at sea near Clifford Pier.

A Straits Times article on February 18, 1948, reported that an official from the Government of India, who was based in Singapore, had made a request on the behalf of the Indian community leaders here to Gandhi’s son, to send his father’s ashes to Singapore. The official’s name was J A Thivy.

It was the emotional ties that the Indian communities in Singapore had with India, that brought the ashes here. But the crowd that subsequently turned up at Clifford Pier offered a send-off was characteristic of the multi-cultural and multi-religious island up till today – Indians, Malays, Chinese, and Europeans came to pay their respects; religious leaders of various faiths prayed over the urn of ashes upon its arrival. 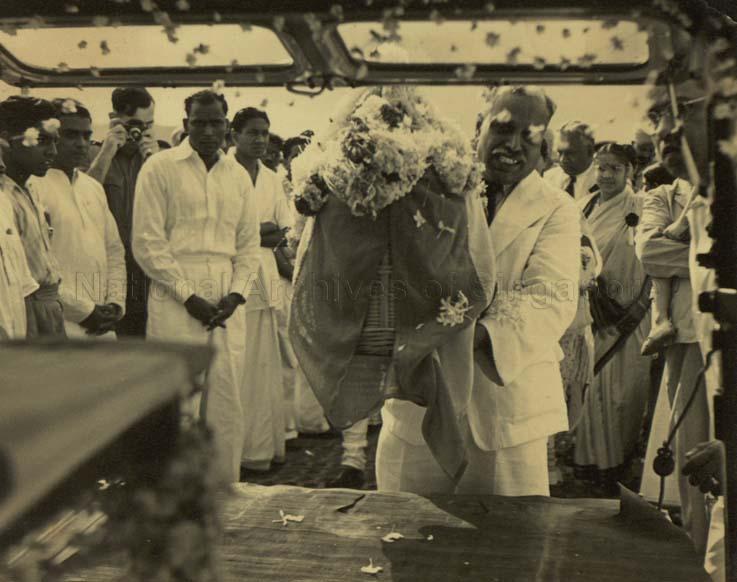 “It was really a very touching and moving moment of history because there was such an outpour of grief at that point of time,” said HE Jawed Ashraf, High Commissioner of India to Singapore. “I looked at some of the news reports of the event. When the immersion took place, 10,000 people gathered at the Clifford Pier, and people were singing Raghupati Raghav Raja Ram – the Bhajan that was sung by Gandhiji and his followers as they walked during the 241 mile Salt March to Dandi.”

Also read: A mountain of history in a handful of ash; Modi to rekindle Gandhian glory in Singapore

“There were also boatloads of people who went in the sea, and they drank the water from the sea after the ashes were immersed. An aircraft flew low, showering petals; people from all backgrounds faiths and races were there; everyone had gathered to pay homage to a man who represented universal values,” he added. 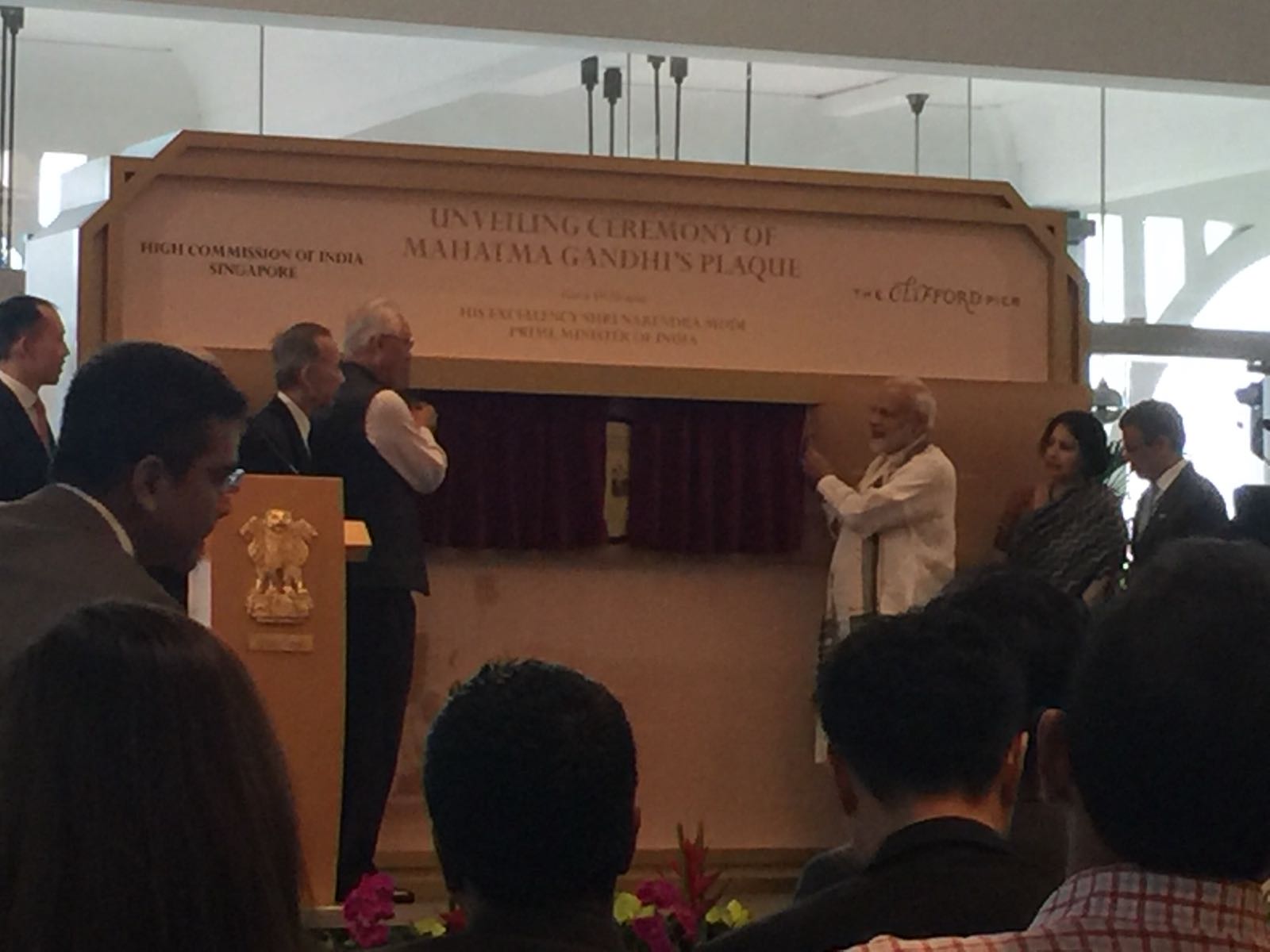 On the last day of Prime Minister Modi’s visit to Singapore today, tributes were paid to Gandhi as a plaque commemorating the Father of the Indian Nation was unveiled at Clifford Pier, Hotel Fullerton.

This is in remembrance of the immersion of Gandhi’s ashes from the pier on March 28, 1948.

“We are one year away from the 150th anniversary of Mahatma Gandhi’s birth, and our idea was to commemorate that moment with a plague at Clifford Pier which is right at the heart of Singapore. It’s also a very historic site, and so we were very grateful for the support received from the Fullerton Bay Hotel which is currently responsible for Clifford pier,” said HE Ashraf. 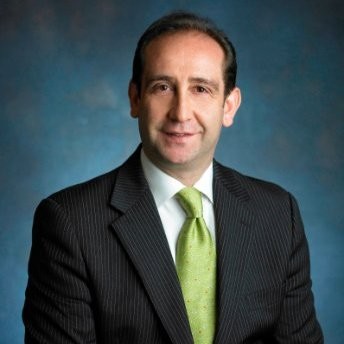 “The 85-year-old Clifford Pier is a historic site in Singapore,” said Cavaliere Giovanni Viterale, General Manager of The Fullerton Heritage. “It used to be the main landing point for migrants and dignitaries arriving in Singapore before the advent of air travel – a gateway for many seeking a new hope and a new life on this island.”

“Today, the heritage and legacies of Clifford Pier continue to thrive, and the area continues to play a role in welcoming travellers from all over the world as an eponymous destination dining restaurant in The Fullerton Bay Hotel. We are honoured to commemorate the life of Mahatma Gandhi and look forward to welcoming tourists, travellers and the public alike to visit The Clifford Pier to learn more about its history and visit the plaque,” he added.