Indian Ocean, the band which spearheaded of the Indian rock and folk fusion scene, will perform live in the Lion City 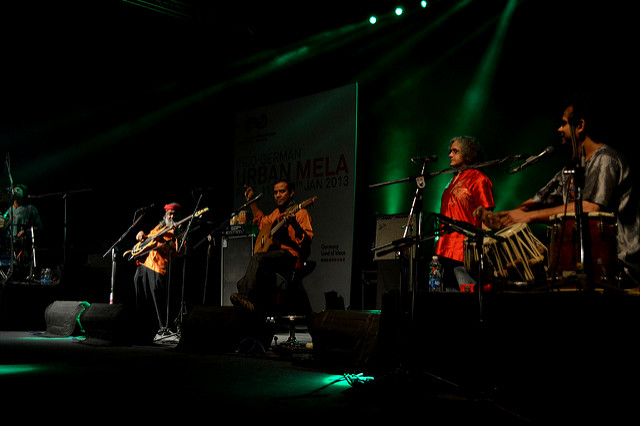 Indian Ocean have toured and played all across the globe. From their first concert abroad in London in August 2001, the band has played dozens of concerts abroad across four continents; touring New Zealand, USA, UK, Japan, Australia, Indonesia and Singapore. Photo courtesy: Flickr?Sonara Arnav

The pioneers of Indian fusion rock are all set to mesmerise music lovers in  Singapore during a Live concert at Gateway Theatre on March 8, 2019. With a career spanning over two decades, Indian Ocean has done countless shows across the world, becoming a name to reckon with in the classical and fusion space and earning a cult following of their own.

COLORS - one of the top Hindi entertainment channels in Singapore, is presenting the event in association with Team Work Productions. Indian Ocean are the latest to enthrall audiences, following unique live events in the recent past including performances by the Shillong Chamber Choir Concert and the mesmerising Shekhar Ravjiani – Haazaron Khwahishien Aisi concert.

Growing recognition has brought Indian Ocean in touch with some of the greatest musicians in the world like Pandit L Subramaniam, the legendary American folk singer Pete Seeger and the virtuoso Japanese trumpeter Terumasa Hino. They have also composed and performed the music to acclaimed films like Black Friday and Masaan.

Formed in the early 90s, Indian Ocean has been one of the leadng lights of the Indian rock music scene. Their unique sound of contemporary rock mixed with classical, jazz and fusion have earned them a huge global following.

The cultural evening at #FriendsofMPConclave2018 gave the guests an opportunity to unwind and lend an ear to the thrilling performances by @indianoceanband, who belted out some of their legendary songs including Bande and Maa Rewa among others. pic.twitter.com/WpKKrMKgLU

Indian Ocean have toured and played all across the globe. From their first concert abroad in London in August 2001, the band has played dozens of concerts abroad across four continents; touring New Zealand, USA, UK, Japan, Australia, Indonesia and Singapore.

They have been invited to play at the Edinburgh Fringe Festival multiple times, where they played 18 concerts in 14 days in 2001, and were nominated the Pick of the Fringe. They returned to the Fringe in 2002 and 2003.

The musical style of the band can be at best classified as folk and fusion music. It is an experimental genre, fusing raga (traditional Indian tunes) with rock music, guitars and drums, sometimes using Indian folk songs.

For details and bookings, contact Karishma Khanna at +65 81189144 or email her at karishma@teamworkprod.com.