Four Indian teachers reportedly stranded in war-ravaged Afghanistan are desperately requesting the Indian government for immediate evacuation, reporting that the country is witnessing a precarious situation aggravating with each passing hour. 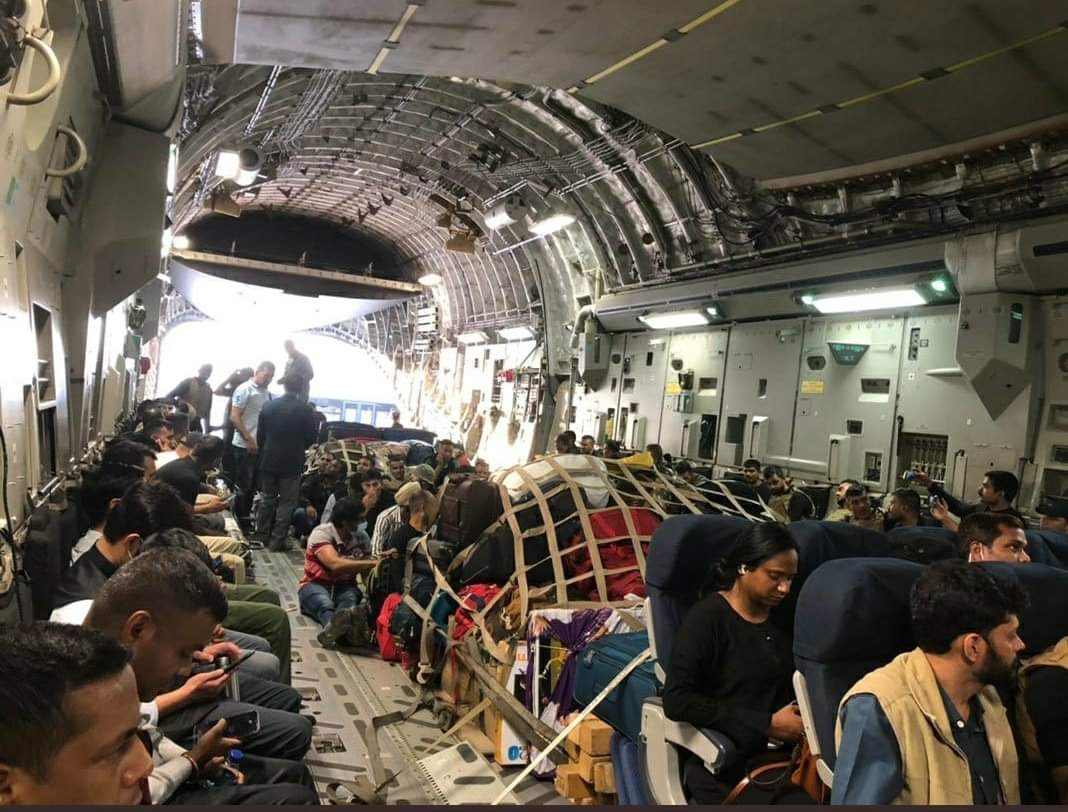 Two days after Kabul fell to the Taliban, India on Tuesday completed the evacuation of all its diplomats and other staff members from the Afghan capital. Photo courtesy: PIB

All four are teachers at the Bakhtar University in Kabul, which was overrun by the Taliban three days ago.

"We have reached out to every possible forum in India and we are hoping that the government will do something to ensure our immediate evacuation. I have not stepped out of the campus in two days and every time there is a commotion outside, my heart skips a beat," Mohd Aasif Shah said.

Shah, who is a resident of Kashmir and has been teaching economics at the Kabul-based university for four years, said he, like his colleagues, fears the current atmosphere following the unexpected turn of events.

"I had plans to go back on Monday. I even had my ticket booked but the situation was rapidly changing. It took me hours to get to the airport and the sight at the airport was like entire Kabul had gathered there. The flight was cancelled and I had no choice, but to return to the university hostel," he said.

Shah had returned to Afghanistan two months back after the government decided to conducted offline examinations.

"My family used to be here with me in Kabul. We all went back to India after the COVID outbreak, and classes were online. However, the government decided to hold exams offline. So only I came back for two months and I was to return after the exams were over," he said.

Syed Abid Hussain from Bihar, who teaches marketing at the university, said so far everybody is safe but considering the situation, "we do not want to live in this uncertainty".

"We have tried to get in touch with the embassy as well as the Ministry of External Affairs. We have not heard from them yet but I am confident that the government must be putting efforts for our safe and quick evacuation from Kabul," he said.

Adil Rasool from Kashmir, whose wife is there with him at the varsity said, "We are just praying that the situation does not get any worse than this and we are able to go home safely."

Right now everybody is inside the campus and waiting for a positive development from the Indian embassy or the government, said Rasool, who has been teaching management at the university since 2017.

Afroz Alam from Jharkhand, who teaches computer science at the university, said so far there has been no bloodshed but the fear remains.

"There has been no bloodshed outside, we have not heard gun shots too in the city but the scare remains whether this is momentary. The campus is huge, we do not have to move outside for necessities too. I am just hoping for safe and quick evacuation from here," he said.

Two days after Kabul fell to the Taliban, India on Tuesday completed the evacuation of all its diplomats and other staff members from the Afghan capital under a "difficult and complicated" exercise, effectively closing its mission for the second time since 1996 when the militant group captured power.

The mission to evacuate close to 200 people including the Indian envoy and other staffers in two military aircraft was accomplished with support from the US, a day after the Kabul airport witnessed unprecedented scenes of desperate residents rushing into it in an attempt to flee the country fearing the Taliban's brutality.

Indian Ambassador to Afghanistan Rudrendra Tandon told media persons that the situation in Kabul is complex and "quite fluid" and that the remaining Indians stuck in the city will be brought back home when the commercial flight services resume.

On its part, the Ministry of External Affairs has said that the focus now would be to ensure the safe return of all Indian nationals from the Afghan capital in view of the prevailing situation in the country, adding India's visa services will continue through an e-Emergency visa facility and it has been extended to Afghan nationals.