For safe and smooth movement of the pilgrims and passengers during three month long Kumbh Mela at Prayagraj, the Inland Waterways Authority of India (IWAI) has set up four floating terminals at Kila Ghat, Saraswati Ghat, Naini Bridge and Sujawan Ghat at Sangam – the confluence of Rivers Ganga, Yamuna and invisible Saraswati.

The IWAI has been tasked by the Ministry of Shipping under Nitin Gadakari to ensure safe passenger movement during Kumbh Mela, the largest religious congregation on the planet.

Prime Minister Narendra Modi inspecting preparations at the inauguration of a state-of-the-art Command and Control Centre for the Kumbh Mela, at Prayagraj, in Uttar Pradesh. Photo courtesy: PMO

Fairway with navigational aids will be maintained between Prayagraj (Allahabad) and Varanasi with targeted Least Available Depth(LAD) of 1.0 metre.  Five temporary jetties at Chatnag, Sirsa, Sitamarhi, Vindhyachal and Chunar have also been setup for embarkment and dis-embarkment of passengers. 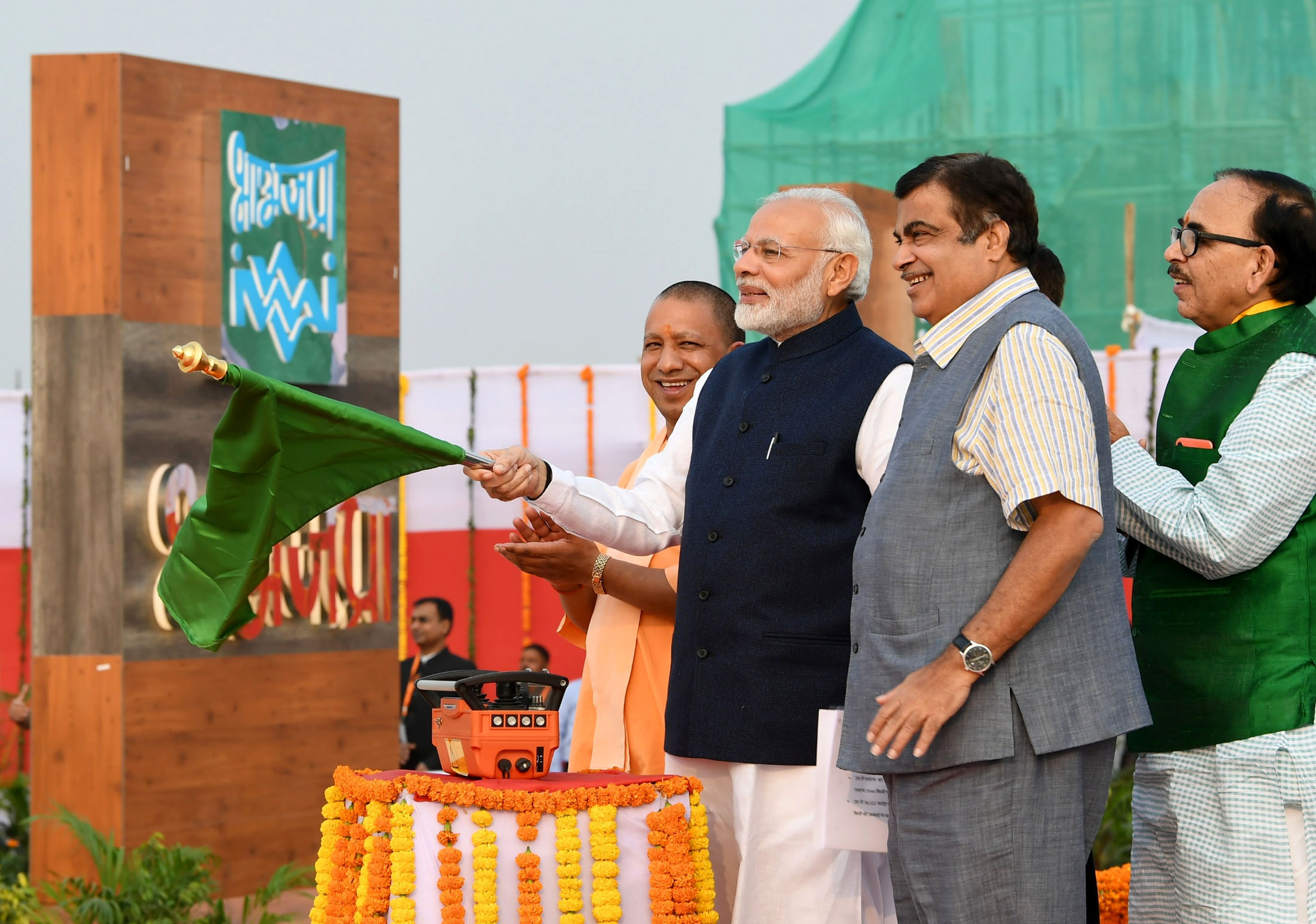 IWAI has the mandate to provide safe and efficient mode of transport through inland navigation.

As a part of development of National Waterway-1  from Allahabad to Haldia,  IWAI is making substantial interventions to make navigable the Allahabad-Varanasi stretch of River Ganga. In this regard, IWAI is working on providing a sufficient draft of 1.0 metre for the entire channel in river Ganga between Allahabad and Varanasi. This will ensure seamless and safe movement of vessels.

Patna and upcoming IWAI terminal at Kalughat are set to emerge as new hub for trade up to Nepal with river Gandak declared as National Waterway-37. 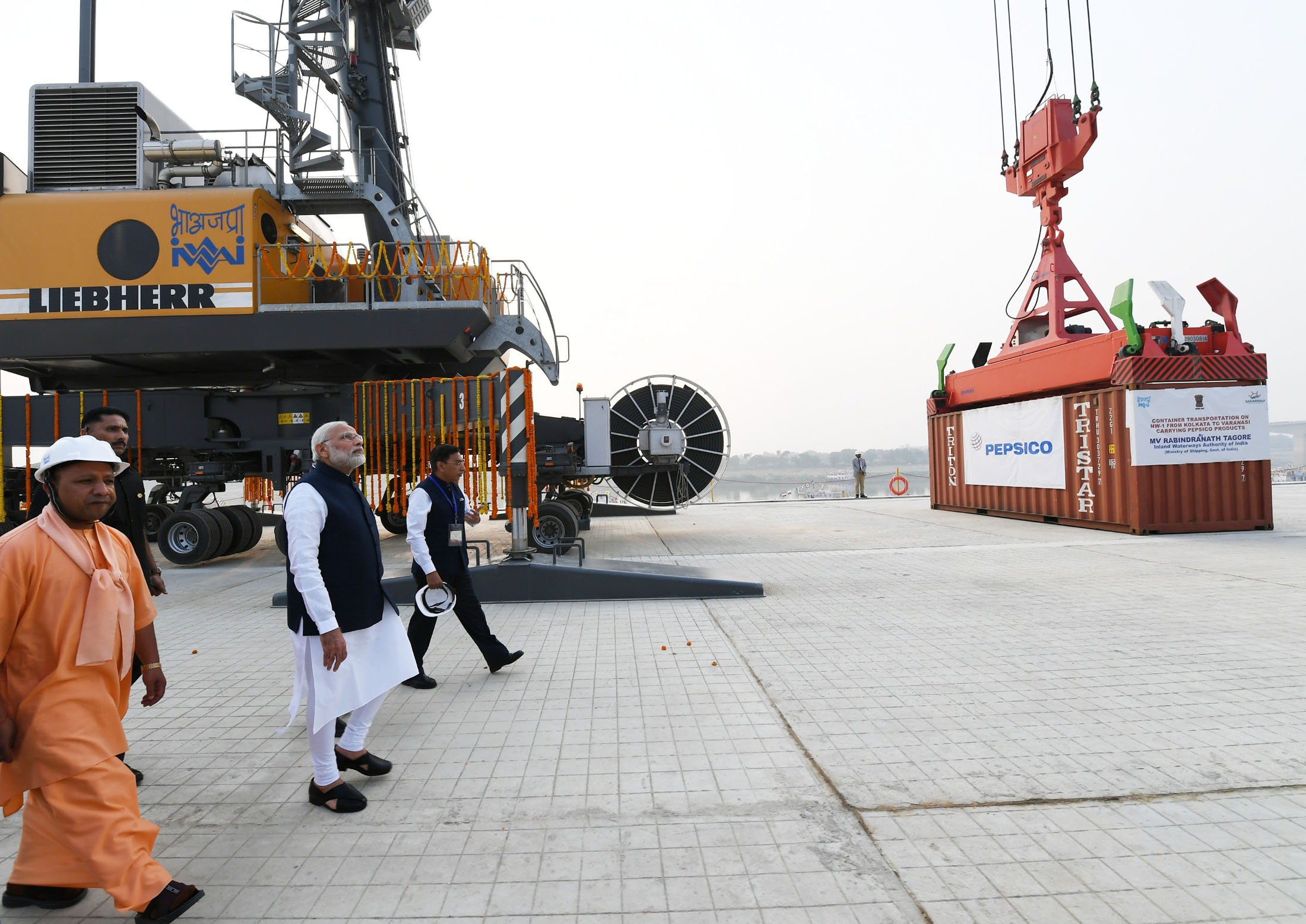 The 815 kms long voyage was a momentous one with the opening up of Kolkata-Patna as a new Origin-Destination pair on the inland waterways.

Plans are at an advanced stage to operationalise Patna-Varanasi sector of NW-1 for container cargo movement. Container cargo transport comes with several inherent advantages. Even as it reduces the handling cost, allows easier modal shift, reduces pilferages and damage, it also enables cargo owners to reduce their carbon footprints.

The Ministry of Shipping is developing a 1390 kilometre long NW-1 (River Ganga) under Jal Marg Vikas Project(JMVP) from Haldia to Varanasi with the technical and financial assistance of the World Bank at an estimated cost of INR 53.69 billion. The project would enable commercial navigation of vessels with capacity of 1500-2,000 DWT, or the Dead Weight Tonnage.

The movement is expected to give a fillip to the region’s growth and employment. According to a World Bank analysis, of the 150 thousand direct and indirect employment opportunities to be created due to interventions under JMVP and 50 thousand will be in Bihar alone.