US President Donald Trump's executive order on religious liberty reflects his commitment to protecting the religious freedom of all Americans, a prominent member of the Sikh Indian-American community in the US said.

Jasdip Singh, founder of ‘Sikh-Americans for Trump’, alleged that for political reasons “certain vested sections” of the society and community members are blaming the President for the rise in hate crimes in the US. 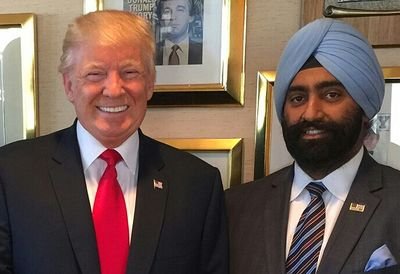 “Protecting religious freedom was one of the centrepieces of President Trump's campaign. He strongly believes this is a first-amendment right, and that no one should be punished especially by the federal government for standing up for their moral beliefs and not violating their conscience,” Singh said.

On May 4, President Trump signed the order on religious freedom, which directs the Treasury Department to not take “adverse action” against churches or religious organisations for political speech.

Singh, who was the only Sikh-American invited to attend Trump's address on the National Day of Prayer in the Rose Garden of the White House, said the US president is against hate crimes and is “determined to unite the divided country.”

Singh said religious freedom is an important issue for the majority of Americans.

Honor to be with the President of USA ( Greatest Nation on Earth ) last week at the White house. President Trump thank you for leading us. pic.twitter.com/pyb9UxRh4n

“It's not the government's job to censor what is acceptable or unacceptable speech. Under the first amendment, individuals do have a right to speech that the listener disagrees with and to speech that is offensive and hateful,” Singh said.

Trump promised during the campaign to dismantle the Johnson Amendment, which bans tax-exempt organisations like churches from political speech and activities. His executive order relaxes IRS enforcement of that ban.