India is set to face Bangladesh in the semi-final of the Champions Trophy today in a bid to defend their title. While experts are warning the team not to be complacent, it’s clear that the boys in blue are favourites for a rematch against arch-rivals Pakistan in the semi-final.

Both teams will play real hard 🏏 to get one step closer to the #CT17 title. #INDvBAN pic.twitter.com/6ZpjYdCRaO

They had a near perfect game against South Africa. Chasing a paltry 192, the defending champions completed the formalities with 8 wickets in hand and 72 balls unused. Despite losing to Sri Lanka, India has been one of the stronger teams in this tournament.

Bangladesh, on the other hand, has ridden its luck to advance to the semis. After losing to England, the Tigers were almost down and out but rain got them a solitary point against Australia and they then defeated New Zealand. Australia had the misfortune of having another game called off due to rain, which helped the Asian team to crawl to second spot.

Thankfully for all fans, it doesn’t look like the weather gods are likely to interfere with the India-Bangladesh semifinal encounter. The winner will face Pakistan in the final, who defeated hosts England by 8 wickets yesterday in the first semi.

Pakistan beat England by 8 wickets to reach the final of the Champions Trophy! #CT17 pic.twitter.com/ngzkxmJpDs

While the forecast suggests that it will be partially cloudy in Birmingham throughout the day, there is minimal chance for rain. According to Accuweather, the chances of a downpour are as low as zero per cent. 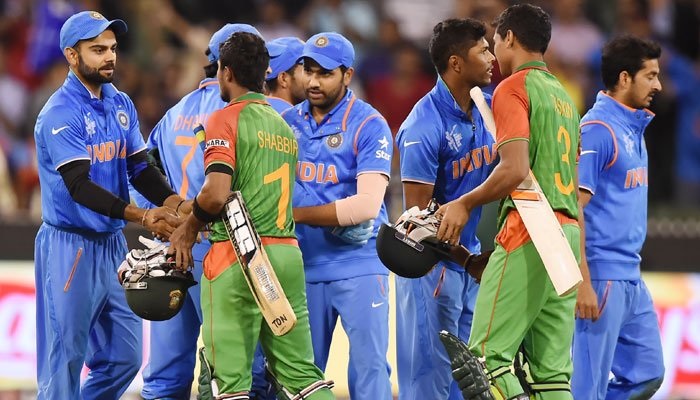 India have only lost once to Bangladesh in a neutral venue. Photo courtesy: Twitter

Given that there is no reserve day for the semis, if the match is rain-hit, India will advance due to their superior performance in the group stage and better net run rate.

Time for ODI No.300 - Here's @YUVSTRONG12 speaking about his landmark ahead of the semi-final against Bangladesh #CT17 #TeamIndia pic.twitter.com/S6Z8gkvVJn

88 – runs needed by Virat Kohli to reach 8,000 ODI runs. He will be the 8th Indian to achieve the landmark.

ICYMI, @imVkohli is back to being the No. 1 ranked ODI batsman! 🙌 pic.twitter.com/glMSvc9JpI

4 – wickets required by Ravi Ashwin to complete 150 ODI wickets. He will be the 13th Indian cricketer to reach the milestone.