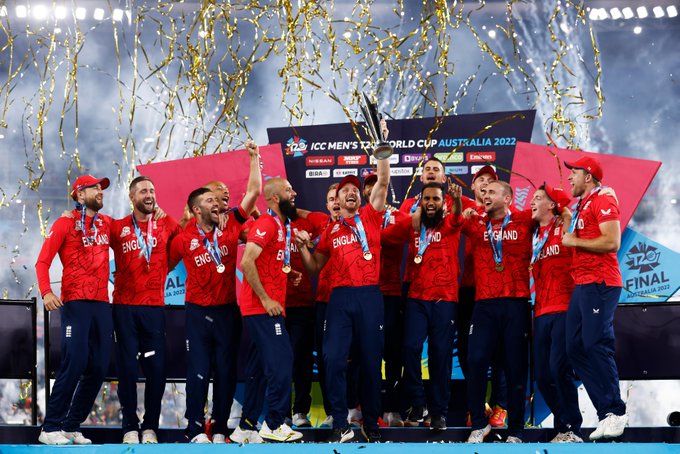 England edged past Pakistan in the 138-run chase at the Melbourne Cricket Ground. Photo courtesy: Twitter/@VitalityBlast

Sam Curran's 3 for 12 from his four overs helped contain Pakistan to 137 for 8 before an unbeaten fifty from Ben Stokes sealed victory by five wickets with one over to spare.

Mohammad Wasim found an inside edge off Moeen Ali onto leg stump in the penultimate over leaving England five down needing six runs more, but Stokes saw them home with 52 not out six years on from that Kolkata heartbreak. An injury to Shaheen Shah Afridi ruled him out of the Pakistan attack, having bowled just 2.1 overs as England claimed the day.

Haris Rauf's 2 for 23 went in vain as England edged past Pakistan in the 138-run chase at the Melbourne Cricket Ground. Earlier, Sam Curran returned with a spell of 3 for 12 and Adil Rashid picked 2 for 22 as England restricted Pakistan to 137 for 8. England skipper Jos Buttler had won the toss and opted to bowl first in the game.