Rounding out her first foreign visit of the new year with a bang, Indian External Affairs Minister (EAM) Sushma Swaraj is set for a busy Sunday at the ASEAN India Pravasi Bharatiya Divas (PBD) in Singapore. The minister is set to deliver the opening address to kick off Day 2 of the megaconference at the Marina Bay Sands Expo Centre. 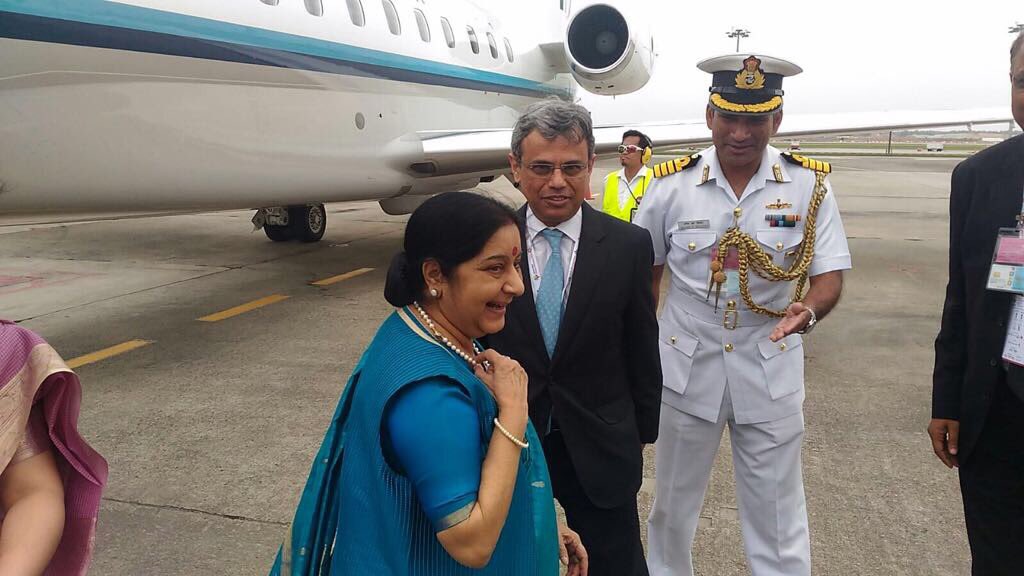 “The PBD, along with the tour, is an important curtain raiser to highlight and reaffirm India’s Act East policy and also to recognise the importance of the Indian diaspora,” Preeti Saran, Secretary (East), Ministry of External Affairs of India, said.

After the plenary session, the minister hopes to meet diaspora delegations from all 10 ASEAN members on the sidelines of the summit before hosting the cultural gala and dinner, sharing the stage with Singapore’s Deputy Prime Minister Teo Chee Hean.

“The EAM has set aside a special time to meet the diaspora delegations from all the ASEAN countries,” Saran added.

“The minister has come here to focus on the ASEAN India PBD. She will devote the entire day to engaging with the diaspora, both from Singapore and ASEAN,” HE Jawed Ashraf, High Commissioner of India, Singapore, said. 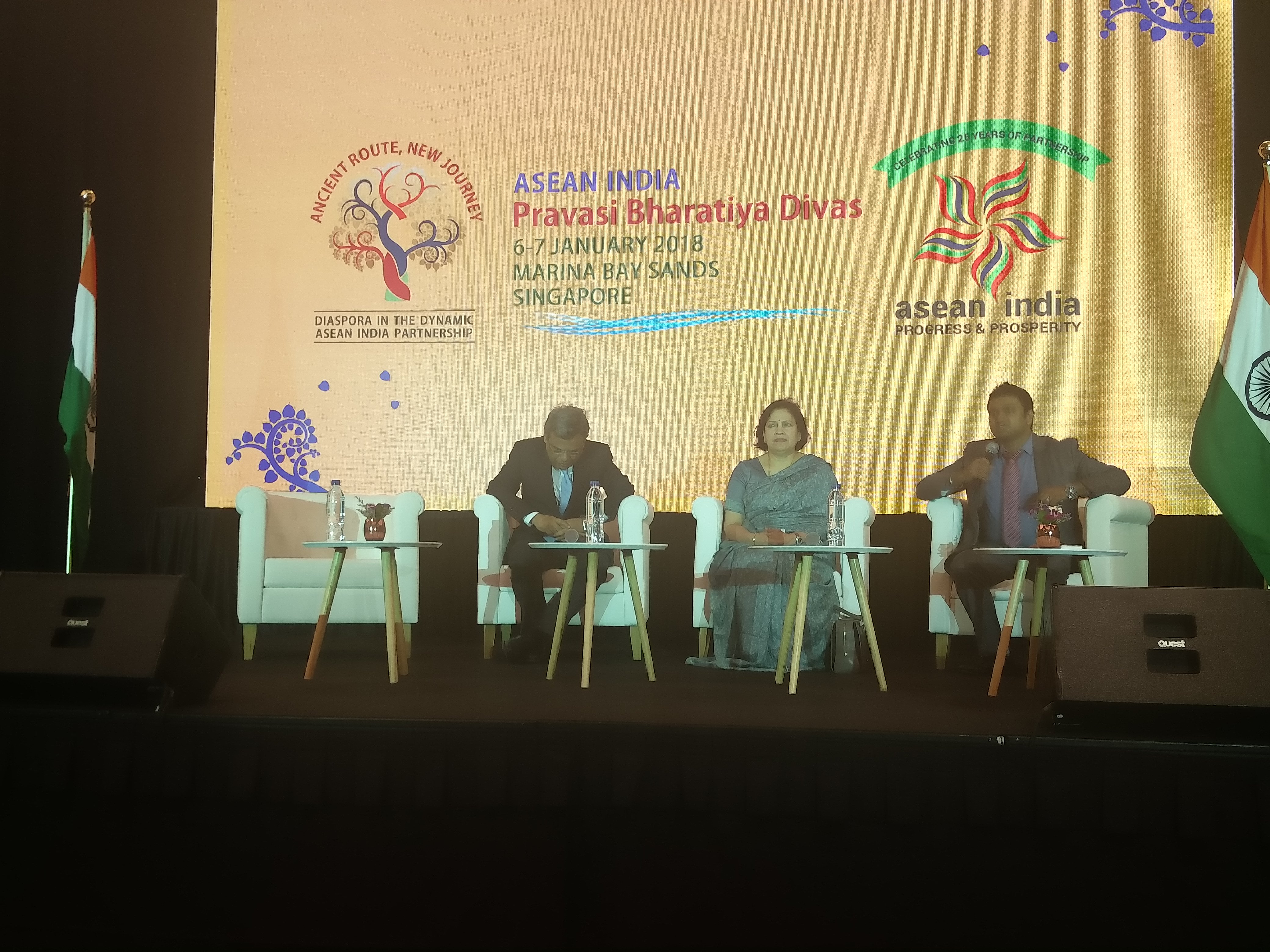 Preeti Saran, Secretary (East), Ministry of External Affairs of India, along with HCI Jawed Ashraf briefing the media about the EAM's visit. Photo: Connected to India.

During her time in Indonesia, the minister met members of the Indian diaspora during a community event hosted by the Indian Ambassador, Saran added.

“A potent symbol of our integration through the assimilation of our mythology and folklore, can be seen in the depiction of the epic, Ramayana. The various forms of Ramayana prevalent in the South East Asian region, be it Ramakien in Thailand, Pha Lak Pha Lam in Laos, Yama Zatddaw in Myanmar, Kakawin Ramayana in Indonesia or Hikayat Seri Rama in Malaysia, bear testimony to our historical connect and shared a tangible heritage,” the minister told the gathering.

The EAM is on the final leg of a three-nation tour that began in Thailand and continued in Indonesia before touching down in the Lion City yesterday. She met the foreign ministers of the two nations and attended banquets in her honour. She also co-chaired the 5th Joint Commission Meeting Between India and Indonesia in Jakarta and launched the fifth round table of the ASEAN-India Network of Think Tanks (AINTT). 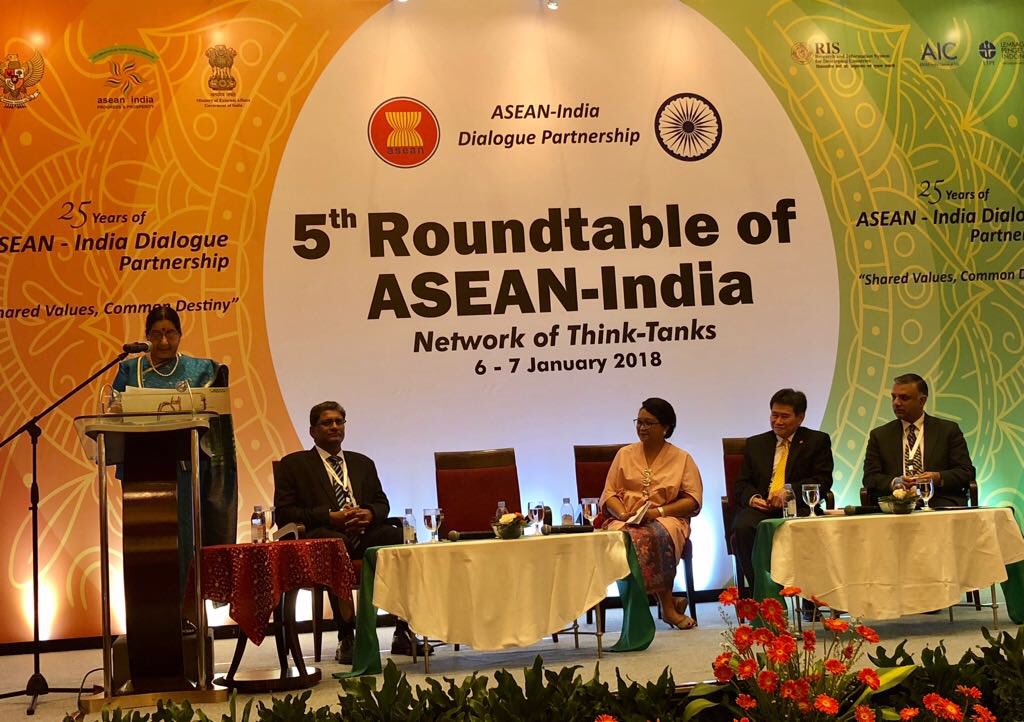 “During our discussions, there was clear recognition that India and Indonesia, as two close maritime neighbours, are natural partners in peace and prosperity,” Swaraj said. “We agreed to develop a synergetic relationship to harness the potential of Indo-Pacific region and to meet the challenges that the region faces.”

Almost immediately after the PBD, Swaraj will host the person of Indian-origin Parliamentarians summit in New Delhi on January 9 to mark the anniversary of the diaspora event, hosting over 100 Indian-origin lawmakers across the world. India will also host the ASEAN-India Commemorative Summit to mark the 25th anniversary of India-ASEAN relations as part of the Republic Day celebrations.

The Minister also expressed her appreciation that Indonesian President Joko Widodo accepted Indian Prime Minister Narendra Modi’s invitation to join the ASEAN Special Commemorative Summit as Guest of Honour at India’s Republic Day celebrations, along with other ASEAN Head of States and Heads of Government, in New Delhi on January 25-26. 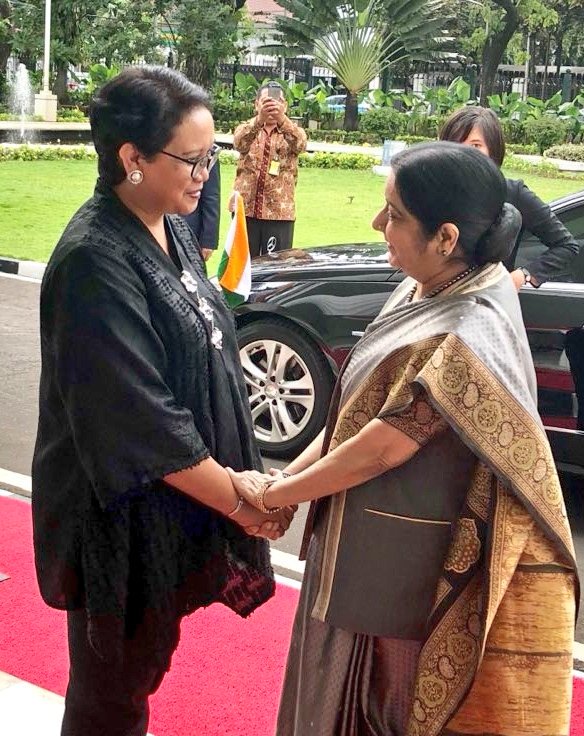 “Their presence in New Delhi on the Republic Day will place India-ASEAN relations at centre stage, and at the heart of India's Act East Policy,” she said.