After Hindi Medium, Stree and Luka Chuppi, versatile film-maker Dinesh Vijan, who is well known for spotting talent, is all set to bring you the perfect mixture of horror and comedy, Rooh-Afza.

Indian actress Janhvi Kapoor will be adding a double dose of entertainment as she will play a double role in his upcoming movie. The young star who has made a promising debut last year will be joining the cast of Rajkummar Rao and Varun Sharma. Produced by Vijan and Mrighdeep Singh Lamba, the film will be directed by debutant Hardik Mehta.

Talking about Janhvi, producer Dinesh said, “For Rooh-Afza we needed actors who could jump into their roles with unabashed conviction. Rajkummar and Varun are phenomenal actors, comedy is a space they excel in and own. For the female lead, we needed someone who could portray two contrasting personalities with ease and Janhvi stood out, she really connected with the script. Her talent is still raw, but she is excited about being moulded. The script is young, refreshing and totally crazy, and she is exactly that!”

Lamba also added, "We took some time to finalise the female lead. Besides being pretty, she needed to oscillate between two characters which are poles apart. You will fall in love with her in one scene and won’t believe she is the same girl in the next one. It's not an easy switch for an actor. It’s the perfect casting.”

Janhvi will be seen playing two characters – Roohi and Afsana and both the characters have contrasting personalities. This movie might take you back to Chalbaaz days which is not just remembered for its story but also for late Indian actress Sridevi’s double role. Film lovers also can’t forget the actor dancing to the famous song Na Jaane Kahan Se Aayi Hai in the rain. 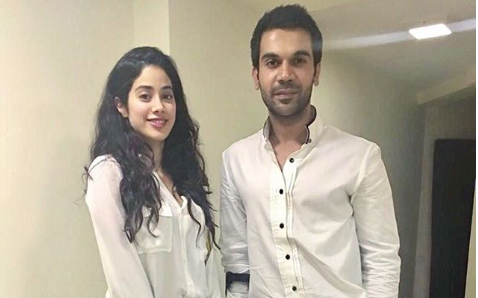 This will be Hardik’s first feature film. Dinesh exclaimed that Hardik is a perfect fit and his national award-winning documentary Amdavad ma brought him the role.

“His strength lies in tapping nuances and pulling you into the world of the film. He effortlessly brings realism to bizarre situations. There’s a thin line that connects ours and the supernatural world, and he seems to have the potential to stitch that perfectly,” he added.

The shooting will start in Uttar Pradesh this June and the film is slated to release on March 20, 2020.