‘Don’t talk to me’: Sonia to Irani in Lok Sabha 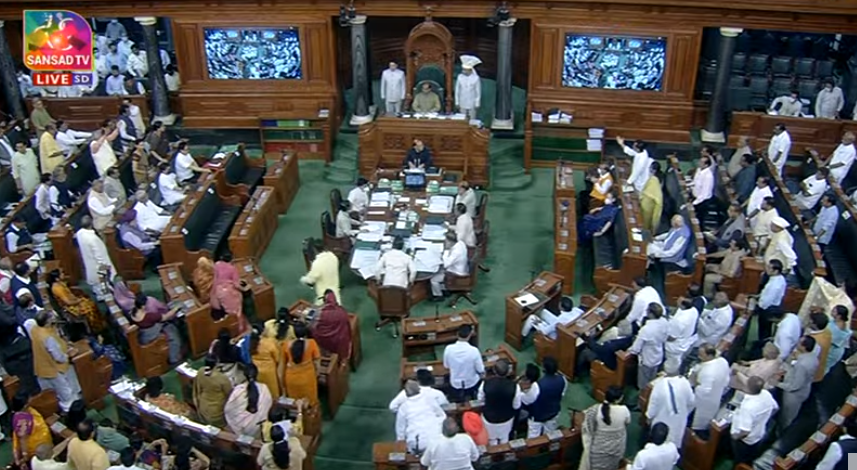 Sonia Gandhi reportedly walked over to BJP MP Rama Devi to ask why she was being dragged into a row over party leader Adhir Ranjan Chowdhury's remark on President Droupadi Murmu. "What is my fault?" Sonia Gandhi is learnt to have asked.

When Smriti Irani reportedly cut in, Sonia Gandhi said, "Don't talk to me", according to sources.

The Congress and other opposition parties accused Smriti Irani and other BJP MPs of heckling Sonia Gandhi.

The hostile exchange took place after Lok Sabha adjourned amid loud protests by BJP MPs against Sonia Gandhi and Adhir Ranjan Chowdhury. "Sonia Gandhi, apologise," Smriti Irani had said in the house, with members of the ruling BJP holding up placards.

After the house was adjourned, Sonia Gandhi was about to leave when she decided to speak to BJP MP Rama Devi instead. Two Congress MPs were with her.

In a stunning move, the Congress president crossed the floor of the House and reportedly said to BJP MP Rama Devi: "Adhir Ranjan Chowdhury had already apologised. What is my fault?"

Sources say Smriti Irani interjected and said, "Madam, may I help you? I took your name." To which, Sonia Gandhi reportedly retorted: "Don't talk to me."

NCP's Supriya Sule and Trinamool Congress member Aparupa Poddar were seen escorting Sonia Gandhi away from the Treasury benches as BJP members flocked around Rama Devi and her.

Finance Minister Nirmala Sitharaman later said Gandhi "put down a BJP member" and "resorted to threats, instead of apologising". She did not name Irani.

A Congress leader said Sonia Gandhi was "having a polite conversation" with Rama Devi when Smriti Irani came at her with pointed fingers. The leader claimed Irani said: "How dare you, don't behave like this, this is not your party office..."

According to the Congress leader, Sonia Gandhi told Irani twice: "I am not speaking to you." The Congress president was "heckled", and the situation became volatile, said the leader.

Sonia Gandhi reportedly said later that she was only trying to speak to Rama Devi as she knew her. "I am not afraid. I know Rama Devi so I went to tell her Adhir has apologised and why are you attacking me?"

Mahua Moitra called it an orchestrated attack on Sonia Gandhi.

Sitharaman, in her retelling of the incident, slammed Sonia Gandhi: "Some of our Lok Sabha MPs felt threatened when Sonia Gandhi came up to our senior leader Rama Devi to find out what was happening during which, one of our members approached there and she (Sonia Gandhi) said - You don't talk to me - putting our MP down in the house. So instead of remorse from the highest leader of the Congress party, we find greater aggression."