Dhruv Garg, from Wokingham in south east England, has got the highest possible score of 162 on a Mensa IQ test. 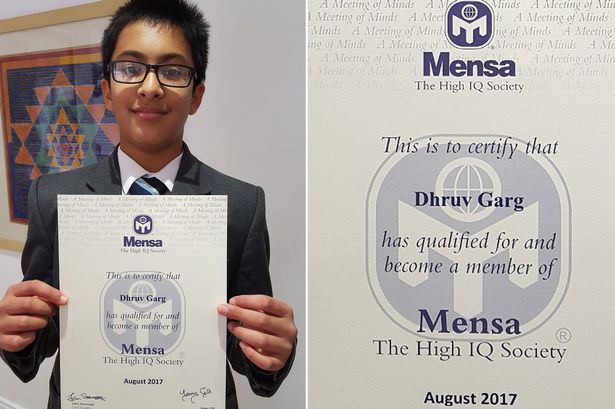 The 13-year-old Indian-origin UK boy’s score places him in the top one per cent of people in the world who achieved this feat, and he is the third Indian child in recent months to achieve this feat.

He also scored the highest mark in the second test, known as the Culture Fair scale, getting 152. This score qualifies him amongst the rare one per cent of the population who take the Mensa exam worldwide in both the exams.

Garg, who goes to Reading School, a grammar in Berkshire, has also been developing an app to combat social isolation by helping lonely people meet up. The app connects people who live in the same area who want to meet new people.

"I was just so surprised to get the result. I was looking for something to do over the summer holidays and so I thought I'd try taking the test, but did not expect to do so well," he said. "I'm really looking forward to the new school year, I really like school and want to use the app to help people."

His mother, Divya, said the whole family is proud of their young prodigy, whose favourite subjects are Maths and Chemistry.

"When he got the maximum score they told me it's the highest mark possible but I didn't realise what it meant. It was only when I spoke to Mensa that they told me I said 'oh my God' this is special, this is really something worth celebrating," she said.

Garg can also complete a Rubik's Cube in under 100 seconds.

"It was in year one, when we started to realise he was gifted as his teachers said he was very sharp and had to have special lessons, so all along he was always special. He is an avid reader and reads a lot of journals," Garg's mother said.