Speaking at the opening of the second Asia-Pacific Forum Against Drugs at the ParkRoyal Hotel in Beach Road today, Singapore Home Affairs and Law Minister K Shanmugam said the death penalty is not a magic solution that solves all drug problems, but part of a larger framework that includes reducing the supply of drugs in Singapore and rehabilitating offenders. 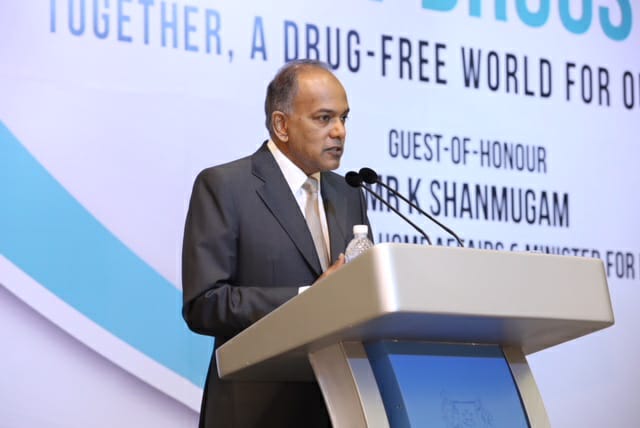 This is because "the stakes are made very clear upfront, and that has a very powerful influence on those who seek to traffic into Singapore", he said.

"I've said repeatedly, we do not take any great joy and comfort in having the death penalty," Straits Times reported him as saying. "We do it reluctantly, on the basis that it is for the greater good of society... and it saves more lives," he added.

In Singapore, Shanmugam pointed out that some have been trying to sway public opinion of the death penalty by “romanticising individuals who have been involved in the drug trade”.

“What they do not focus on are the thousands of people whose lives are ruined, whose families are ruined,” he said, adding that the Singapore Government and agencies are “happy and prepared” to debate the issue with the death penalty abolitionists at any forum.

“Seizures of heroin have also increased while hundreds of new psychoactive substances were produced between 2009 and 2016,” he added.

The forum, organised by the National Council Against Drug Abuse, brings together local and foreign delegates from the Government and non-government organisations, as well as civil society groups, to discuss how to counter calls globally for drug liberalisation.

Shanmugam noted that there have been growing calls from activists and “well-funded campaigns” around the world, including in Singapore, for a softer stance against drugs. These activists present the argument that it is medically acceptable to use drugs or propose policies to decriminalise drug use, Channel NewsAsia reported.

“In our view that is reckless, irresponsible, it’s a cop-out and it’s a step backward,” said Shanmugam. “It will worsen the problem, it has worsened the problem in the countries that have taken these steps.”

Using Colorado in the United States as an example of where legalisation has "gone wrong", Shanmugam added that victims of crimes such as homicides linked to drugs far outnumber the people who might be on death row at any given time.

Colorado, which approved the commercialisation of medical marijuana in 2010 and legalised recreational marijuana use in 2014, has also become the No 1 state for youth cannabis use.