Indian National Congress vice-president Rahul Gandhi began his two-week US tour on a controversial note with his address to students at University of California Berkeley creating a stir among the politicians and media back in India. He attacked Prime Minister Narendra Modi and the BJP and also said that he is "absolutely ready" to take charge of the Congress party.

The event, 'India At 70: Reflections On The Path Forward', was held at International House, Chevron Auditorium in Berkeley. Towards the end, on being asked about career choices, he said, “I’ve studied in India and in the US, and I found that were many cultural differences. You have to adapt to living in a foreign country and once you return to India, you have to relearn the Indian way of life.”

He courted controversy with his remarks. “Liberal journalists being shot, people being lynched because they are Dalits, Muslims killed on suspicion of eating beef, this is new in India and damages India very badly. The politics of hate divides and polarises India making millions of people feel that the have no future in their own country. In today’s connected world, this is extremely dangerous. It isolates people and make them vulnerable to radical ideas,” said Gandhi in his address.

During his speech, he touched on many hot-button topics that sparked a wildfire among the Indian media. Some of his blunt remarks were about BJP trolls and widespread dynastic politics in India that drew an immediate reaction from the ruling Bharatiya Janata Party (BJP).

“There is a BJP machine of about 1,000 guys sitting at computers and telling you about me,” he said. “Realise that there is a tremendous machine. All they do is spread rumours about me. The operation is run by the gentleman running our country,” 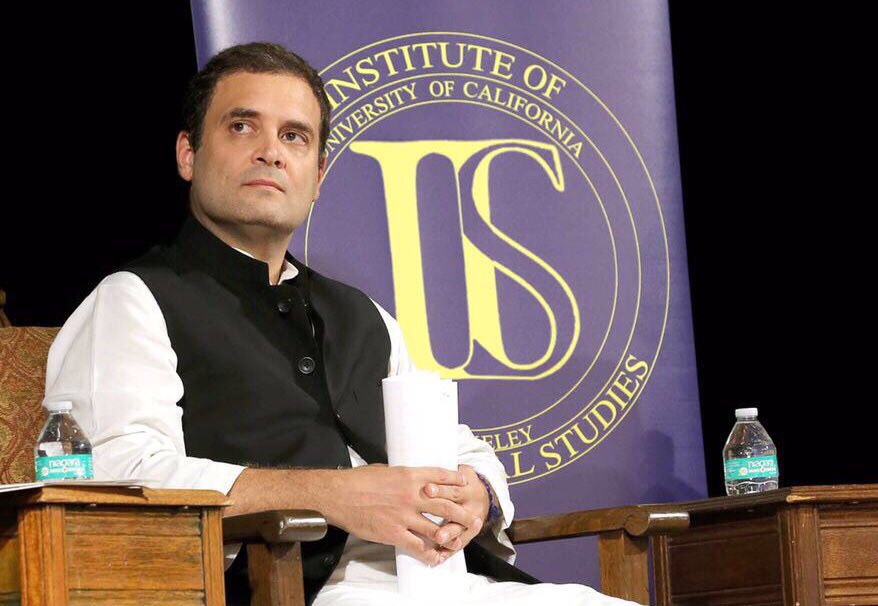 “Actually most parties in India have that problem. So don’t give us stick because Akhilesh Yadav is a dynast. Stalin is a dynast. (Prem Kumar) Dhumal’s son is a dynast….Even Abhishek Bachchan is a dynast. That is how India runs. Don’t get after me because that is how the entire country is running,” he added.

Smriti Irani, Gandhi’s rival in the 2014 Amethi election and the Information and Broadcasting minister, criticized the Congress leader for his speech.

“A failed dynast today chose to speak about his failed political journeys in the United States of America,” said Irani in New Delhi. “But after failing to connect with the people of India, he chooses a platform of convenience to berate his political opponents. It shows the failed strategy of Rahul Gandhi. That’s he’s going to an international stage to speak about his failed political journey in a country where people didn’t accept him,” she added.

Her remarks earned a swift retaliation, with Congress leader Anand Sharma saying, "The issues raised by the I&B minister show her ignorance of history and her eagerness to be an apologist for a prime minister who has betrayed his country." In addition, Congress leaders Shashi Tharoor, who was present in the audience for the speech, and Digvijay Singh took to Twitter to express their support.

Rajiv ji brought Computer to India and now Rahul ji is in Silicon Valley to add on to our Policy in IT Sector. We support his effort #RGinUS

Gandhi also stated that he was ready to take over the reins of the party. "I am absolutely ready to do that but we have an organisational election process that decides and the process is currently ongoing...That decision is something the Congress party should take," said Gandhi. He also acknowledged that a "certain arrogance" had crept into the Congress and took responsibility for what he called a couple of years of lost opportunities from 2012.

Gandhi arrived in San Francisco yesterday and will, during his two-week US tour, meet Silicon Valley entrepreneurs and thought leaders to develop a better path forward for the Congress party. A highlight will be an event in New York City's Marriot Hotel with a capacity of 1,900 people, where he will address overseas Indians.