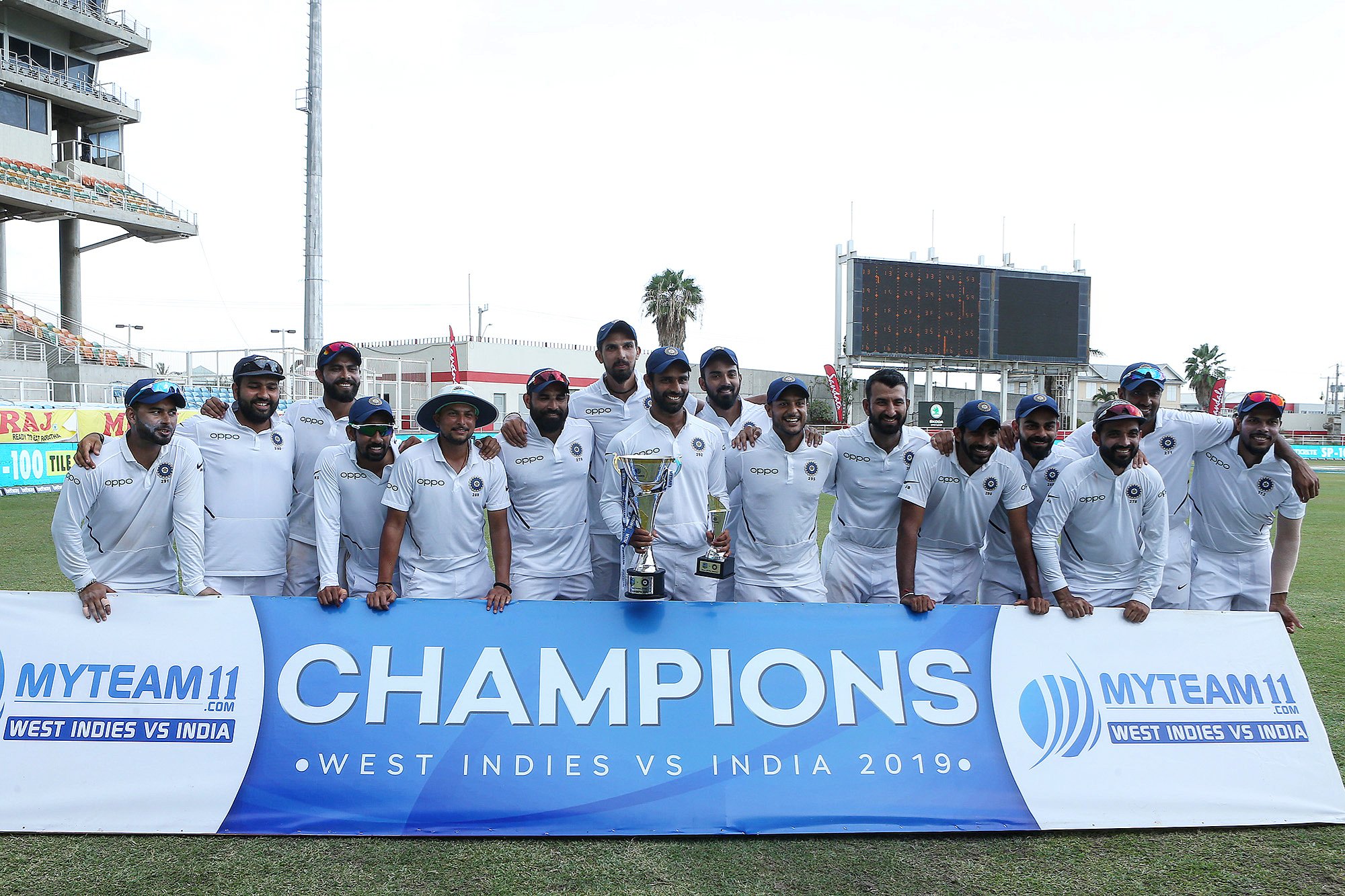 It took 4 days for India to wrap up a mammoth 257-run win over the West Indies in the 2nd Test and with it complete a 2-0 cleansweep of the Test series.

Set a target of 468 to win, the Windies were never really in the game, despite the brief resistance they showed on the morning of Day 4 on Monday.

A 61-run stand for the fifth wicket between Shamarh Brooks and Jermaine Blackwood propelled the Men in Maroon in their chase but the fightback lasted only till lunch.

Blackwood was not in the original eleven for the West Indies but had to be drafted in after a Jasprit Bumrah hit on Darren Bravo’s stem guards (which protect the batsman’s neck) sent the West Indian out with a concussion. Under the ICC’s new concussion substitute law Blackwood, who had been on the field as a substitute fielder in the Indian innings, was brought into the side, making him the second ever concussion substitute to come on in Test cricket after Marnus Labuschagne, who came in for Steven Smith in the Lord's Ashes Test last month. West Indies also became the first team in Test matches to have 12 batsmen batting in a single innings.

Much of the damage in the Windies' second innings was done by Ravindra Jadeja and Mohammed Shami who came away with 3 wickets each, with Bumrah taking one and Ishant Sharma scalping two wickets.

West Indies were bowled out for 210 in the second innings giving India a big 257-run win in a match that will be best remembered for Bumrah’s 6 wickets in the first innings, including a hat-trick, as well as Hanuma Vihari’s maiden century.

“There is not much you can say about Jasprit, the way he has been bowling. All we can say is we are really lucky to have him on our team... It is really pleasing to see a guy who was tagged as a T20 specialist, he came in and took over the one-day scene, and now he is taking over Test cricket. He is proving people wrong that there is a set template for every format. If you have belief, you can play every format,” said skipper Virat Kohli after the match.

Lovely batting by @Hanumavihari to get to his 1st 100. Also very good to see @ajinkyarahane88 get back in form.
The maturity & patience they have shown is a good sign for the Indian Test team.#WIvsIND pic.twitter.com/T5EaNxGdpn

The victory against the West Indies has made Kohli the India captain with most wins, with 28 victories in Test cricket, going past MS Dhoni's 27.

"Captaincy is just a ‘c’ in front of your name honestly. It's the collective effort that matters. It's a by-product of this quality team that we have here... If we didn't have the bowlers that we have, I don't think the results would have been possible,” said Kohli at the post match presentation ceremony.

Feels great to get win our first series in the Test Championship. 💪🏼
Thorough performance by the team overall, blessed to be a part of this special unit. 😇 pic.twitter.com/83tb8LoJNJ

The 2-0 series wins also means India move to the top of the World Test Championship table with 120 points.

A great win, an outstanding team effort and tons of happy memories.🔥🔥💪 pic.twitter.com/waZtQpaWDV