Chennai winds up repairs on US Navy ship

The repair work on the Larsen & Toubro owned US naval ship Charles Drew, which was berthed at a shipyard in Chennai, has been completed, said a statement by US Consulate General in Chennai. 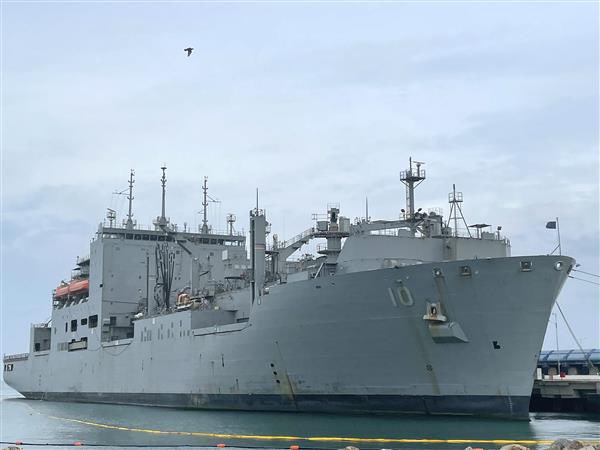 The Charles Drew is one of several ships in the US Navy’s MSC Combat Logistics Force (CLF). Photo courtesy: Twitter/@PrakaashPal

It said that the routine maintenance performed aboard the naval ship included repairs to safety and crew habitability systems and equipment.

The Charles Drew is a dry cargo ship of the Lewis and Clark class operated by Military Sealift Command (MSC).

On August 7, it berthed at L&T’s Kattupalli shipyard in north Chennai, becoming the first American naval vessel to come in India for maintenance.

Authorities had stated back then that the maintenance and repair work was finished by August 17.

The repair of a US military ship, the Charles Drew, carried out by L&T, according to Judith Ravin, US Consul General in Chennai, is a significant development to be welcomed as a symbol of improved US-India collaboration.

Ajay Kumar, the defence secretary, stated that India’s proposal to supply supplies, repairs, and refits to US ships acquires significant significance in advancing the strategic partnership between India and the United States and fostering peace in South Asia under the Indo-Pacific strategy.

During the April US-India 2+2 Ministerial Dialogue, both US Secretaries of State Antony Blinken and Defense Secretary Lloyd Austin stated that they intended to undertake maintenance in India.

According to the press release, the navy ship’s visit shows how committed the US Navy and Department of Defense are to using repair facilities in India.

One of the several ships in the US Navy’s MSC Combat Logistics Force (CLF) is Charles Drew. The US naval ships’ on-the-water supply lines are known as CLF.

Almost all of the supplies required by Navy ships are carried on board these ships, including fuel, food, fleet ordnance, dry cargo, replacement parts, mail, and other supplies.

The navy fleet can stay at sea and be prepared for conflict for extended periods of time thanks to CLF ships. CLF ships restock not just US Navy ships operating in the Indo-Pacific region but also foreign partners and allies.