Chandrayaan 2: 'India is with you', Modi tells ISRO scientists

The much-anticipated Chandrayaan 2 suffered a heart-breaking setback as all contact was lost with the lander seconds before it was due to touch down on the Moon's surface early on Saturday, the Indian Space Research Organisation (ISRO) said. 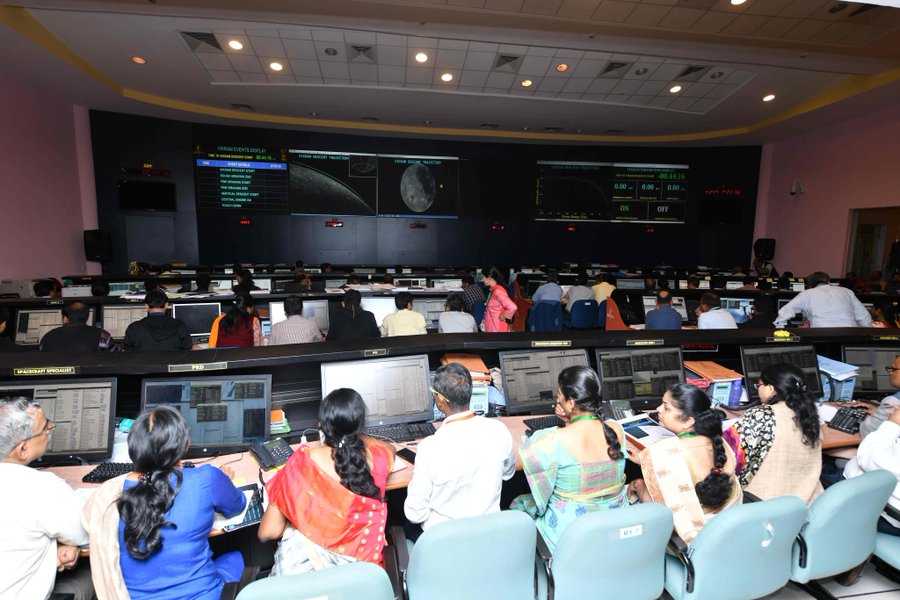 The Moon lander Vikram separated from its orbiting mothership and performed a series of manoeuvres to lower its altitude for a touchdown between 1:30 am and 2:30 am. Contact was lost when it was about 2.1 km from the surface. Photo courtesy: Twitter/@isro

India had hoped to create history by becoming the first nation to reach closest to the lunar south pole but as the landing time of 1:55 am came and went, there were no signs that the mission had succeeded.

ISRO Chairman Dr K Sivan then briefed Prime Minister Narendra Modi, who gave an impromptu pep talk to the scientists in the control room minutes after the signal was lost at 1:55 am. He is set to address the nation from ISRO Control Centre at 8 am IST as well.

Ups and downs are a part of life;

What you have achieved today is no small achievement; the country is proud of you;

We can learn a lot from this; we will continue our journey and I am with you: PM @narendramodi to scientists at #ISRO#Chandrayaan2 #Chandrayaan2Live pic.twitter.com/77ivFTO69G

India is proud of our scientists! They’ve given their best and have always made India proud. These are moments to be courageous, and courageous we will be!

Chairman @isro gave updates on Chandrayaan-2. We remain hopeful and will continue working hard on our space programme.

"There are ups and downs in life. This is not a small achievement. The nation is proud of you. Wish you the very best. I congratulate you. You all have done a big service to nation, science and mankind. I am with you all the way, move forward bravely," he said.

The PM also addressed the nation from the ISRO Space Centre in Sriharikota at 8 am, telling the scientists, who were visibly upset after last night's disappointment, "India is with you."

Reminding the people of India that the nation has faced many moments of adversity but they have never crushed the country's spirit, Modi in his 30-minute bilingual address said, “This is the moment when a nation stands tall."

“As important as the final result is the journey and the effort. I can proudly say that the effort was worth it and so was the journey. Our team worked hard, travelled far and those teachings will always remain with us. The learnings from today will make us stronger and better," the PM added.

The Moon lander Vikram separated from its orbiting mothership and performed a series of manoeuvres to lower its altitude for a touchdown between 1:30 am and 2:30 am. Contact was lost when it was about 2.1 km from the surface.

"The Vikram lander descent was as planned and normal performance was observed until an altitude of 2.1 kilometres. Subsequently, the communication from the lander to the ground station was lost. The data is being analysed," ISRO chief K Sivan said. Dr Sivan had called Chandrayaan 2 the "most complex mission ever undertaken by ISRO".

Had things gone as per plan, the rover Pragyan - which means wisdom in the Sanskrit language - was to roll out from the Moon lander between 5:30 am and 6:30 am. Over its lifespan of 14 days, Pragyan was expected to explore craters for clues on the origin and evolution of the Moon, and also for evidence on how much water the polar region contains.

The region of the Moon where the lander, named after Vikram A Sarabhai, the father of India's space programme, was aiming for is largely unexplored.

The mission that started from July 22 with the launch of the Chandrayaan-2 spacecraft achieved one milestone after another in a phased manner.