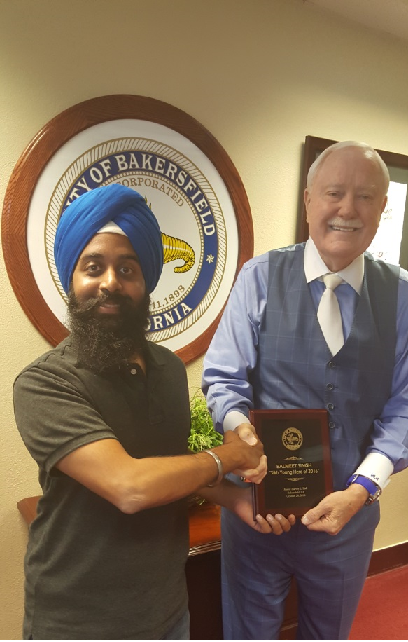 Balmeet Singh, a young Sikh-American, has been awarded the ‘Young Sikh Hero’ by the Mayor Harvey Hall of Bakersfield, California for standing up against racism and standing for his community.

Being a victim of verbal abuse himself, Balmeet didn’t step back but galvanised the community of Bakersfield to take a strong stand against bigotry and racism.

Earlier this on  September 30, Balmeet was accosted by an angry stranger outside a restaurant who threw some drink on his face and threatened him with his life, apparently because the 30-year-old realtor and health clinic administrator was wearing a beard and the traditional turban worn by virtually all Sikh men. He was at first, bewildered and then afraid that he may be assaulted.

The alleged attacker said that Balmeet Singh was a threat to the country and hurled racial abuse at him before running away in a pickup truck. The man was later arrested and charged with a hate crime only after the community put intense pressure on the police to take the appropriate action.

Egged by the incident  Balmeet Singh took it upon himself to educate the local community about the Sikh Faith and bring people of all faiths together in order to combat hatred and ignorance towards all groups by involving city officials, politicians and faith leaders and organising events at the local Gurdwara.

He focused on the issue of bystanders not wanting to take action when they see a crime being committed, especially if the victim was of a minority race or faith.