British Prime Minister Theresa May said talks on post-Brexit trade ties with countries like India, Australia and New Zealand are already underway as she tried to woo voters ahead of the June 8 general election. The Conservative party leader is facing a crisis as latest opinion polls showed Opposition Labour leader Jeremy Corbyn narrowing the gap between the two parties to just three points, with some even suggesting the likelihood of a hung Parliament.

If we get Brexit right, we can do great things and build a stronger Britain. Back me on June 8th so I can get the best Brexit deal for you. pic.twitter.com/bjgODYPjTu

May’s plan has been to shift the focus back on Brexit and away from domestic issues such as social welfare and the Manchester bombing, which have swung public opinion against her.

“If we get Brexit right, I am confident that that future will be bright. As we pursue a bold and ambitious free trade agreement between the UK and the European Union – and as we get out into the world to do new trade deals with old friends and new allies around the globe – the opportunities for our economy will be great,” she said.

“We have already started discussions on future trade ties with countries like Australia, New Zealand and India. While countries including China, Brazil, the US and the Gulf States have expressed their interest in striking trade deals with us as soon as they can,” the Conservative Party leader said. 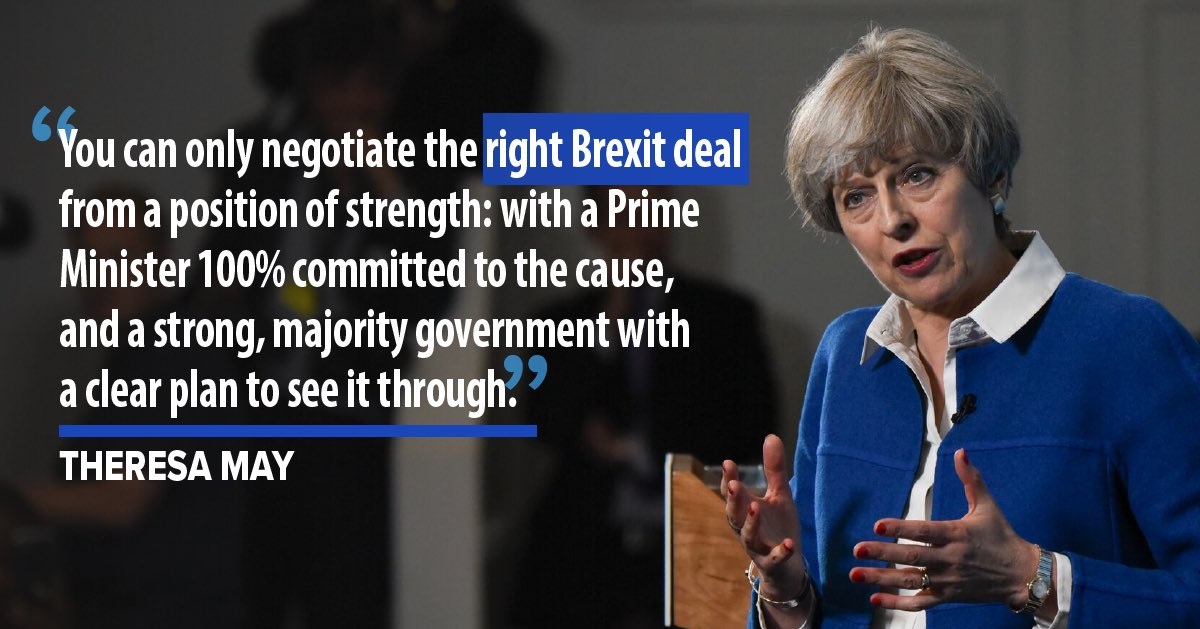 With just six days to go to the polls, May has come under fire for her refusal to join a live television debate on Wednesday and used her campaign speech in Teeside in the north-east of England today to try and win back some of the lost ground.

“How dare you call a General Election then run away from the debate,” Leader of the Liberal Democrats Tim Farron said during Wednesday’s TV debate, where May sent UK Home Secretary Amber Rudd to stand in for her.

May in response sought to raise the spectre of a hung Parliament that could require the Labour party to stitch up an alliance with the Scottish National Party (SNP), among other smaller parties.

She said, “He [Corbyn] doesn’t believe in Britain. He doesn’t have a plan. He doesn’t have what it takes. And after last night [Wednesday’s TV debate] it’s clearer than ever that just 11 days after the election when the negotiations begin, Jeremy Corbyn’s focus wouldn’t be on trying to negotiate a deal for Britain in Europe, but on trying to stitch up a deal with [SNP leader] Nicola Sturgeon and the rest.”

Great rally in Derby tonight, talking about the opportunities ahead if we get Brexit right. pic.twitter.com/BwyzLOyxgs

Her speech came as a YouGov poll for The Times puts her ruling Tory party on 42 per cent, down one point since the end of last week, with Labour up three on 39 per cent and the Liberal Democrats down two points on 7 per cent – at par with the far-right, anti-EU UK Independence Party (UKIP).