United Kingdom's Indian-origin Secretary of State for Business, Energy and Industrial Strategy Alok Sharma confirmed a GBP 1-million government investment to be divided between seven companies to tackle the dangers presented by space debris to satellites of everyday importance. 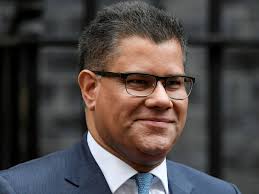 the seven pioneering space projects we are backing today will significantly strengthen the UK's capabilities to monitor these hazardous space objects, helping to create new jobs and protect the services we rely on in our everyday lives," India-born minister Alok Sharma said. Photo courtesy: UK Parliament

As part of a wider strategy, the UK Space Agency has signed a formal agreement with the Ministry of Defence (MoD) to work together on monitoring threats and hazards in orbit and track so-called "space junk" which could also pose a threat to the International Space Station (ISS) and its crew.

"Millions of pieces of space junk orbiting the earth present a significant threat to UK satellite systems which provide the vital services that we all take for granted - from mobile communications to weather forecasting," said Sharma.

"By developing new AI and sensor technology, the seven pioneering space projects we are backing today will significantly strengthen the UK's capabilities to monitor these hazardous space objects, helping to create new jobs and protect the services we rely on in our everyday lives," the India-born minister said.

Estimates of the amount of space debris in orbit vary, from around 900,000 pieces of space junk larger than 1 cm to over 160 million orbital objects in total and it is seen as a global problem. The Indian Space Research Organisation (ISRO) stated it "recognises the importance of the current space debris scenario, and the impact it has on the effective utilisation of space technology".

Last year, India launched the Network for Space Objects, Tracking, and Analysis (NETRA) early warning system to secure its satellites and other assets in space at an estimated cost of INR 400 crore.

Only a fraction of this debris can currently be tracked and avoided by working satellites. The UK government says it has a significant opportunity to benefit from the new age of satellite megaconstellations - vast networks made up of hundreds or even thousands of spacecraft - so it is more important than ever to effectively track this debris.

The projects being offered the new funding include Lift Me Off, who will develop and test machine learning algorithms to distinguish between satellites and space debris, and Fujitsu who are combining machine learning and quantum-inspired processing to improve mission planning to remove debris.

The UK Space Agency revealed that last year there was a close call in which a GBP 100 million spacecraft operated by the European Space Agency (ESA) had to light up its thrusters to dodge a satellite.

A clash between the spacecraft was far from certain, but the trajectories posed enough of a threat that ESA concluded that they needed to manoeuvre the spacecraft out of harm's way.