Britain exits EU amid night of parties and protests

Amid pro-Brexit celebrations and anti-Brexit protests, the United Kingdom officially left the European Union at 23:00 GMT on Friday more than three years after it voted to do so in a referendum, marking the end of a 47-year chapter in its history.

Candlelit vigils were held in Scotland, which voted to stay in the EU, while Brexiteers partied in London's Parliament Square. 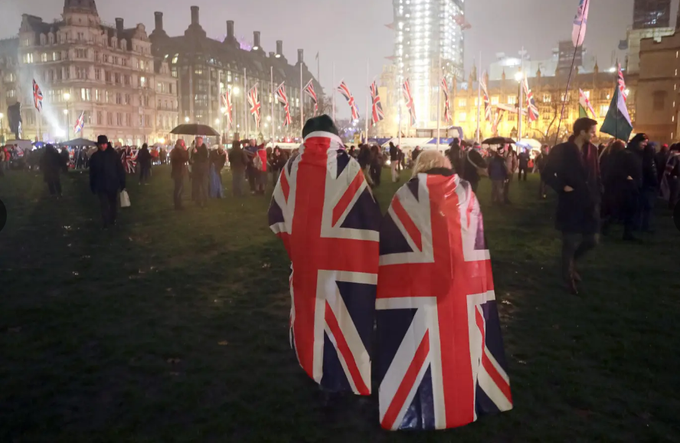 For British and EU citizens alike, there will be no measurable changes seen for at least 11 months as both bodies move into a transition period. Photo courtesy: Twitter/@queenofswords6

UK Prime Minister Boris Johnson released a message on social media an hour before the UK's departure, vowing to lead the nation forward.

"For many people this is an astonishing moment of hope, a moment they thought would never come. And there are many of course who feel a sense of anxiety and loss. And then, of course, there is a third group - perhaps the biggest - who had started to worry that the whole political wrangle would never come to an end. I understand all those feelings and our job as the government - my job - is to bring this country together now and take us forward," Johnson said.

Some symbolic moments to mark the historic occasion included:

For British and EU citizens alike, there will be no measurable changes seen for at least 11 months as both bodies move into a transition period while they hope to negotiate a new free trade agreement, cooperation on security, and new arrangements for fishing among other vital policies.

Britain joined what was then the European Economic Community on January 1, 1973, at the third try and an overwhelming majority voted to stay in a referendum two years later. The 2016 referendum spearheaded by Johnson saw a narrow (52 to 48 per cent) result to leave the EU and the government struggled to get a withdrawal deal approved by Parliament for over three years until the historic winter elections in 2019 granted the Conservatives a record 80-seat majority and gave PM Johnson, who spearheaded the Leave campaign in London, the political capital to get the Bill passed.